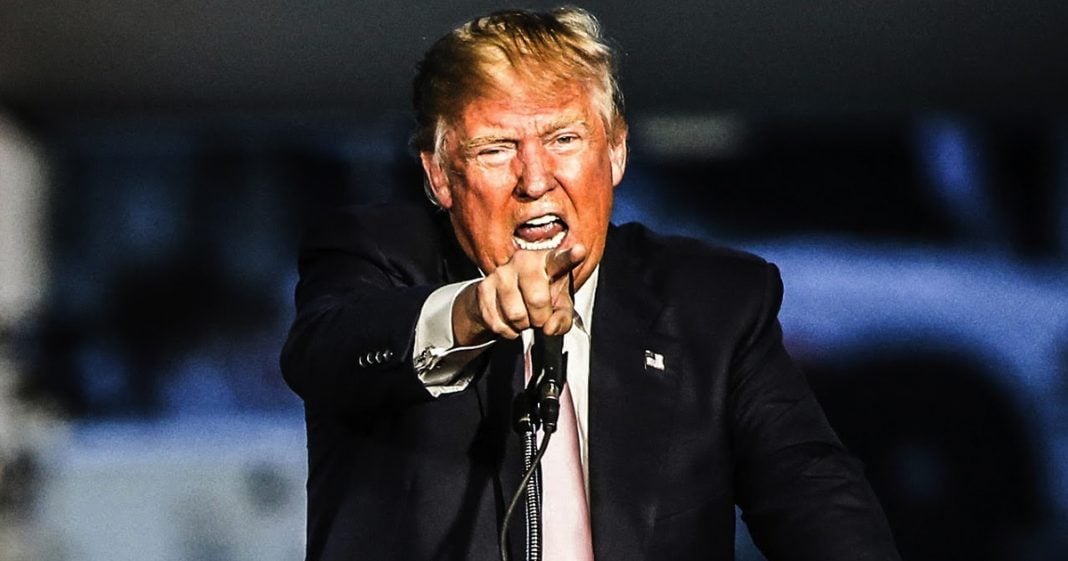 Donald Trump told Republicans in Congress that if they aren’t able to pass their healthcare bill then they should simply repeal the Affordable Care Act – Obamacare – and then worry about replacing it later. This would result in millions of people immediately being kicked off their health insurance plans and cause a severe market crash for the insurance industry. This man understands nothing about politics or economics, let alone human compassion. Ring of Fire’s Farron Cousins discusses this.

On Friday morning, Donald Trump took to Twitter as he always does, but this time he wasn’t necessarily insulting anyone, so it was actually off to a better start today at first. Anyway, on his Twitter feed, Donald Trump told Senate Republicans, ‘If you cannot pass your healthcare plan, then you simply should vote to just repeal Obamacare and then replace it some other time.’ You know maybe if you get time in the fall or winter or whatever, go ahead and just replace it then. But the most important thing is repealing Obamacare, the Affordable Care Act, even if you don’t have a replacement.

Now we have been over this time and time again. Even the Republicans in the House and Senate, as cruel as they may be, understand that you cannot take healthcare away from millions of people without some kind of backup plan that you at least pretend is going to help them. That’s why the whole idea of repeal then replace was scrapped at the very beginning of your tenure as president, Mr. Trump. People know that’s a bad idea. Both parties understand that’s a horrid idea, yet here you are rehashing the same failed ideas that the Republican party has been working on for years.

Your party has had seven years, more than seven years, to come up with a decent healthcare plan and they have failed. It’s all they’ve talked about for more than seven years, and they failed. You have majorities in the House and the Senate and the White House, and you still can’t get it done because your primary focus is not on helping people get access to affordable healthcare; your focus is on cutting taxes for the wealthy. The Republicans somehow managed to turn a healthcare bill into a tax give away. I mean those two issues could not be further apart, and yet that’s what this healthcare bill does.

So, Donald Trump’s brilliant plan is to just rid of Obamacare, and then later on down the road, if we can, we’re gonna replace it with something. Here’s the thing. If you repeal Obamacare, you do immediately get rid of those taxes on the wealthy, so it accomplishes their goal. They’re not going to come up with a replacement down the road because they won’t need it. They won’t care about it at that point because their donors already get the tax break.

Repeal then replace simply becomes repeal and not replace, but maybe that’s what the Republicans want. Maybe that’s better for them because then they don’t have to answer for a horrible bill. All they did was take away one that they claim is horrible and dying. Every day on Twitter Trump and Paul Ryan out there telling us Obamacare is failing by the day. It’s not. By any measure whatsoever is that thing failing.

Not only that. Let’s take a different look at this, okay? An angle that most people haven’t really thought about yet. Yes, the worst part of it would be that people lose their health insurance. According to estimates 18 to 24,000 people a year will die as a result of that. But what suddenly happens to insurance markets when they receive less money? Nobody’s talked about that. I mean the insurance market like most other things, these companies are traded on Wall Street. What happens to their stock when 22 million people suddenly stop paying insurance premiums because they can’t afford it anymore? What happens to those companies when they start losing billions of dollars in revenue because of this Republican plan?

The rates for the rest of us will go up. Meaning we will have less disposable income, and it’s going to lead to a massive crash amongst insurance companies, insurance markets, potentially reaching the stock market in other areas, reducing overall economic activity for American citizens. It’s an economic disaster waiting to happen, and nobody has talked about it from that angle either.

Probably because, again, it secondary to the fact that people will die, but there is no angle from which you can look at this situation and say that it’s a good idea. Insurance companies losing money hurts all of us too because we still have to pay for insurance and we then make up the difference from the people who cannot pay any more. People who die, that is lost productivity. That is lost economic activity. Yet Donald Trump doesn’t seem to understand that.

Allegedly such a great and wonderful businessman doesn’t get the fact that if people don’t have money to spend the economy suffers. But it doesn’t matter to him. All that matters to him is that he personally gets a tax break by repealing Obamacare now and then really never getting around to replacing it with any form of meaningful legislation because we all know Republicans will never do anything. Their history shows this in the 17 years. They’re not gonna pass any form of legislation that actually helps the American working class or the underclass.