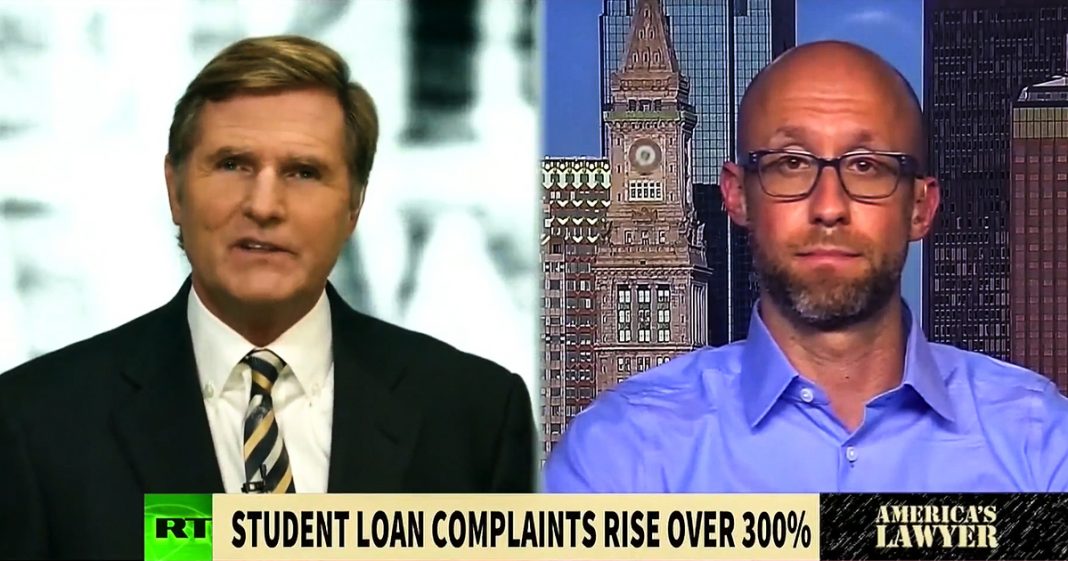 Papantonio: More than one million people defaulted on their student loans last year, compared to just 400,000 the year before. Overall, student loan debt has reached nearly $1.5 trillion. That’s equal to the entire GDP of Canada. There’s no question this crisis is spiraling out of control for students that are unable to pay back the increasingly outrageous college tuition prices. If the current default rate continues, we’re looking at 25% of all borrowers actually defaulting on their loans by next mid-term election. So is there any way out of this problem? Joining me now to talk about it, is Adam Minsky, he’s an attorney who specializes in student loan cases.

Adam, what are the main reasons that student loan debt, this is an incredible number, $1.5 trillion, really? How has it gotten there?

Adam Minsky: Yeah, it’s certainly a combination of factors. I think part of it is the runaway increases in tuition at both private and public institutions. I think part of it as well, is the increased access to borrowing, both in terms of private and federal loans, coupled with a withdrawal of public investment in higher education, which has shifted the financial burden and responsibilities onto borrowers and their families.

Papantonio: According to a new report by the Consumer Financial Protection Bureau, complaints to the Bureau about student loans have increased by about, I think the number’s 325%, that’s just between March of 2016 and I think, February of 2017. Why do you think that is? What’s going on out there? Because I got to tell you something, the typical American doesn’t know that we have a bubble that is potentially bigger even, than the last bubble that we went through with real estate. What is your take?

Adam Minsky: In terms of those complaints, they’re almost entirely against servicers. Servicers are often not the actual lender. This is certainly true of federal student loans where the lender is often the Department of Education, which then farms out the servicing operations to some private companies that then handle borrower accounts. A lot of the complaints are against those types of companies that handle borrower accounts on behalf of the original lender.

Servicing in the student loan world, has been an absolute mess, to be quite frank, since I started doing this work many years ago. I think the reason for the recent spike is simply because the Consumer Financial Protection Bureau has been doing more and more high profile work in this area, and people have become more aware of the existence of the CFPB and its complaint system. And so I don’t think it’s necessarily an indication that things are worse with student loan servicing, they’ve been bad for quite a while, I think it’s indicative of the fact that people now have a place where they can go to file a complaint.

Papantonio: Well there are about eight million Americans that are now in default on their student loans, last number I saw. What are the legal options? What options do they have to get back on track, whether they hold a private or a public loan? What can these people do? Because you’re hearing constantly this problem seems to be getting worse and worse, so what does a person do if they’re holding a loan like that?

Adam Minsky: It really does depend on the type of student loan that the borrower has. For federal student loans, which comprise the vast majority of that 1.4 or $1.5 trillion in outstanding student debt, there are statutory options available to borrowers that allow them to resolve their defaults. There is usually two different options, they can rehabilitate their loans, which is a temporary payment plan tied to the borrower’s income and financial circumstances. In some cases borrowers can also take out a federal consolidation loan, which resolves the default in the course of combining their loans into one. Borrowers might also be able to settle, although federal student loan settlements can be quite expensive.

For private student loans, there usually are not options to rehabilitate, with some exceptions, and you can’t take out a federal consolidation loan to pay off defaulted private loans. So borrowers who have defaulted private loans often have fewer options that usually involve some sort of settlement arrangement or raising defenses to a collections action, for instance, if the lender waits too long to sue them, they might be able to raise a defense based on the statute of limitations. Sometimes there are defenses based on inability to produce proper documentation, but there is no statutory way out of default.

Papantonio: Adam, let me move on. Senators like Elizabeth Warren, they claim that the government makes tens of billions of dollars in profit off of student loans, and then on top of that, they make it impossible for a student to get out from underneath, by declaring bankruptcy for a student loan. Is this an exaggeration or is there something to this? Are these numbers right? First of all, tens of billions of dollar that the government’s making and they won’t help pay for a college education for the average American, did I get that right?

Adam Minsky: Yeah, I’m not familiar with the specific numbers in terms of the budget, but I know that the government does view the student loan system as a revenue generating system. And so they are looking at it to make money, and if you talk to many student loan borrowers, they will tell you that even while they’ve made many payments, they may not have even touched the principal balance of the loans, because of the way that interest works. And so I certainly think that borrowers are paying back several times what they originally took out in debt, and of course that’s all profit from the government’s perspective.

Papantonio: Well I got to tell you Adam, thanks for joining me on this, but I want to tell you, my take on it is, that taxpayers are going to end up footing this bill when everything collapses. On top of that, the Trump administration has proposed budget calls for de-funding the public service loan forgiveness program, so you add that to what’s happening here, and all of a sudden we’re looking at the same kind of bubble that people have been warning about, that we saw with real estate, 2008.

I think people who don’t believe this affects them, really need to take a more serious look at this, because it certainly does have a huge effect on what they may have to pay as taxpayers when this bubble, when this whole thing that the government has created, understand, the government has created this problem, when it all collapses, taxpayers are going to end up having to foot the bill.

Thanks for joining me Adam.