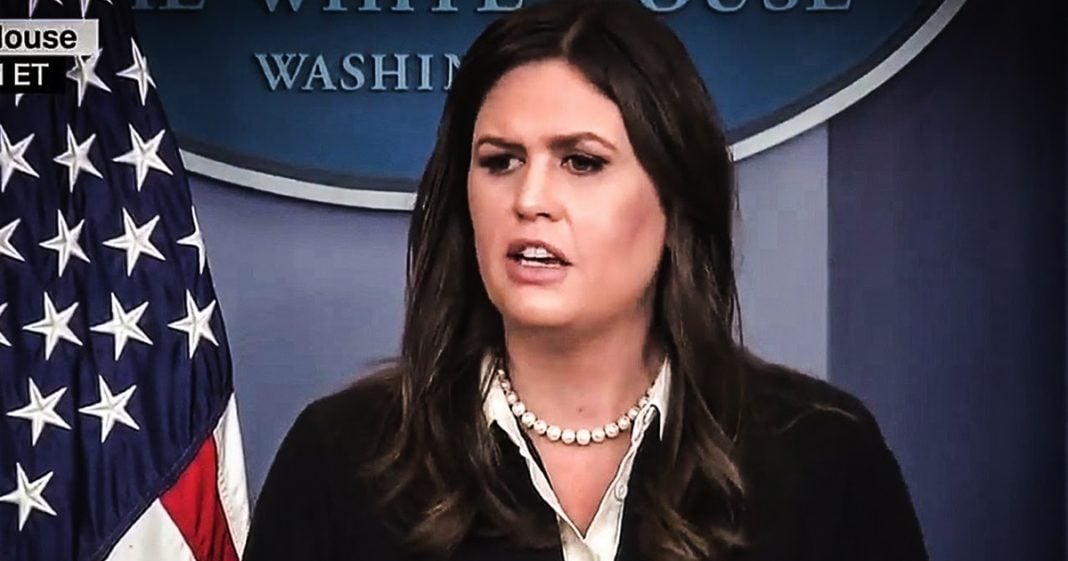 White House deputy press secretary Sarah Huckabee Sanders was forced to defend Trump’s disgusting tweets about the hosts of MSNBC’s Morning Joe, and she pulled it off in a way that only a true Trump loyalist could. She claimed that Americans knew what they were getting with Donald Trump, so they shouldn’t be surprised by his actions. Ring of Fire’s Farron Cousins discusses this.

Reporter: Sarah, doesn’t he have to meet a higher standard than cable news anchors?

Sarah Huckabee: Look, I don’t think you can expect someone to be personally attacked day after day, minute by minute, and sit back. Look, the American people elected a fighter, they didn’t elect somebody to sit back and do nothing. They knew what they were getting when they voted for Donald Trump and he won overwhelmingly.

Something Huckabee Sanders mentioned at the very end of that clip was that Trump won overwhelmingly. I think it’s important to point out the fact that no, he did not. He lost the popular vote by three million votes, okay? So let’s get that line of thinking out of our political lexicon. Trump did not win overwhelmingly by any margin.

But to be honest, part of me actually agrees with Sarah Huckabee Sanders. Nobody should be surprised by these tweets. They were disgusting, absolutely, but this is what we’ve come to expect from Donald Trump. We knew it during the campaign, we knew it when that 2005 Access Hollywood audio was leaked, that this was the kind of person he is, okay? Anybody who claims to be shocked by this clearly hasn’t been paying attention.

What’s really interesting about yesterday’s press briefing, not just that question, but the question that that same reporter had actually asked before Huckabee Sanders gave that response. Take a look at the exchange that took place before that.

Reporter: Two questions to follow up on that. One is that I understand your point that he’s the president of the United States, they are cable news anchors, so he has to stand to a higher standard, one. And two, you talk about criticism, he said that former president Obama wasn’t born in this country, right? So, he clearly was part of criticizing the past president who was not immune to criticism himself. I wonder how you make that argument.

Sarah Huckabee: Again, I think I’ve been pretty clear that when the president gets hit, he’s going to hit back harder, which is what he did here today.

Reporter: Doesn’t he have to meet a higher-

Trump has been one of the most toxic people in American politics long before he ever decided to run for president. He is the one who continuously for years pushed the issue that President Barack Obama wasn’t even born in the United States. That was flat out false, and yet Donald Trump continued to push it. He de-legitimized the first African American president of the United States for no other reason than to drum up hatred among Republicans. Nobody has sunk to that level in their attacks on Donald Trump. He is being attacked for his corruption, he is being attacked for the horrible things he says, for his lack of leadership, for his constant vacations. Any of these attacks, as the White House calls them, on Trump have all been based in fact. It’s not like people are just out there making fun of him because they want to, like Donald Trump does to people. We’re going after him because he’s a horrible human being and we’ve got factual evidence to back it up.

Furthermore, when asked if the president should be a role model, Sarah Huckabee Sanders once again explained it in the only way that a Republican can. The only real role model, according to Sarah Huckabee Sanders, is God. None of us are perfect. Yeah, I get that, but Donald Trump also has a young son. He has a young son who I’m assuming looks up to him, and he sees these tweets, and he sees the reporting on it. I mean, at this point even Sarah Huckabee Sanders and Sean Spicer and everybody else in that White House has to understand. Even Republicans are speaking out against these tweets, GOP senators and congress people. Fox News hosts think this was disgusting. And when your best excuse is that none of us are perfect, only God is perfect, or that the American people knew what they were getting into, then perhaps you need to take a closer look at the man that you work for and realize that this is not normal.