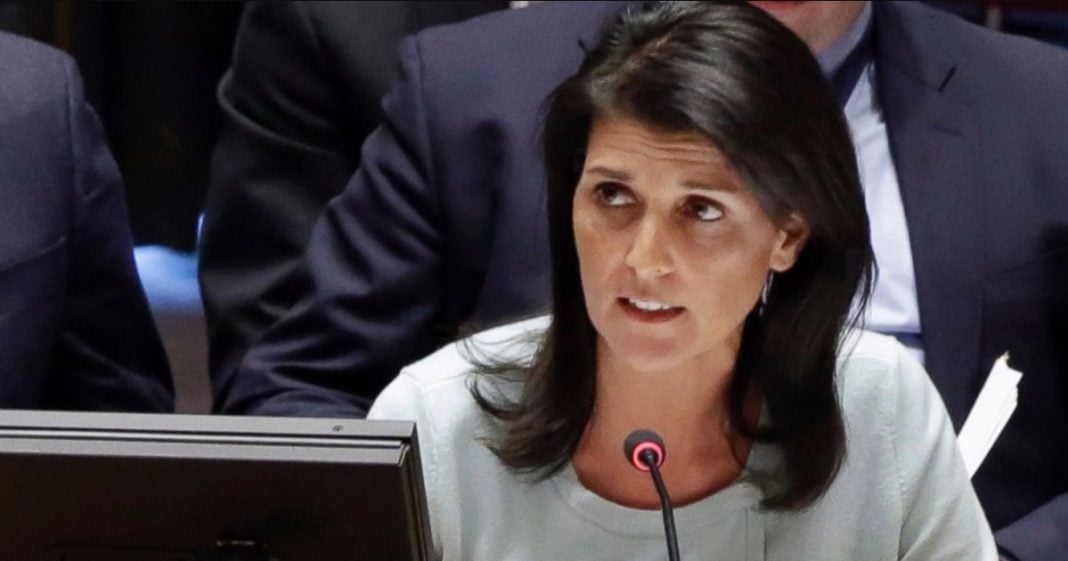 A watchdog group is calling out U.N. Ambassador Nikki Haley for potentially violating the Hatch Act when she endorsed a GOP candidate.

Citizens for Responsibility and Ethics in Washington (CREW) penned a letter calling attention to Haley’s actions, a letter that was sent to the Office of Special Counsel on Tuesday.

Norman, who won his congressional race, was helped along by not only the President of the United States, but by Haley as well, whose re-tweet of the president’s message is being interpreted as an endorsement.

“By posting this tweet on an account that referred to her official position, Ambassador Haley likely engaged in political activity prohibited by law.”

After it was pointed out to Haley that her tweet might be illegal, she later deleted it.

The federal Hatch Act is in place to prohibit the use of existing political office to change the outcome of another political race. The law does not apply to the President or Vice President, which is why Trump is not the focus of this inquiry.

Unfortunately for Haley, U.S. ambassadors do fall under the umbrella of the Hatch Act, and she could now be subject to disciplinary action including removal from her position, demotion, being barred from political office for up to 5 years, suspension, letter of reprimand, or up to a $1,000 fine.

If the Hatch Act, an old law established in 1939, sounds familiar, it’s because it has been brought up an awful lot in the recent year. Former FBI Director James Comey was accused of violating the act in November of 2016 when he made public an element of the Clinton email investigation shortly before the election between Hillary Clinton and Donald Trump.

Trump’s Social Media Director Dan Scavino Jr., was also hit for violating the Act when he called on supporters to oust a Republican congressman from office in April of this year. He was issued a warning letter from the Office of Special Counsel.

But in the case of Haley and Comey’s actions, finding them guilty of violating the act is more difficult than it seems. The act specifically refers to a politician intentionally trying to skew the outcome of a race by their action – if that was not their clear intention, they are not guilty.

If the current lack of justice in this Administration is any indication, Haley will face no consequences for her violation. At the very least, we can be grateful to have watchdogs like CREW to keep an eye on wrongdoing at every level.