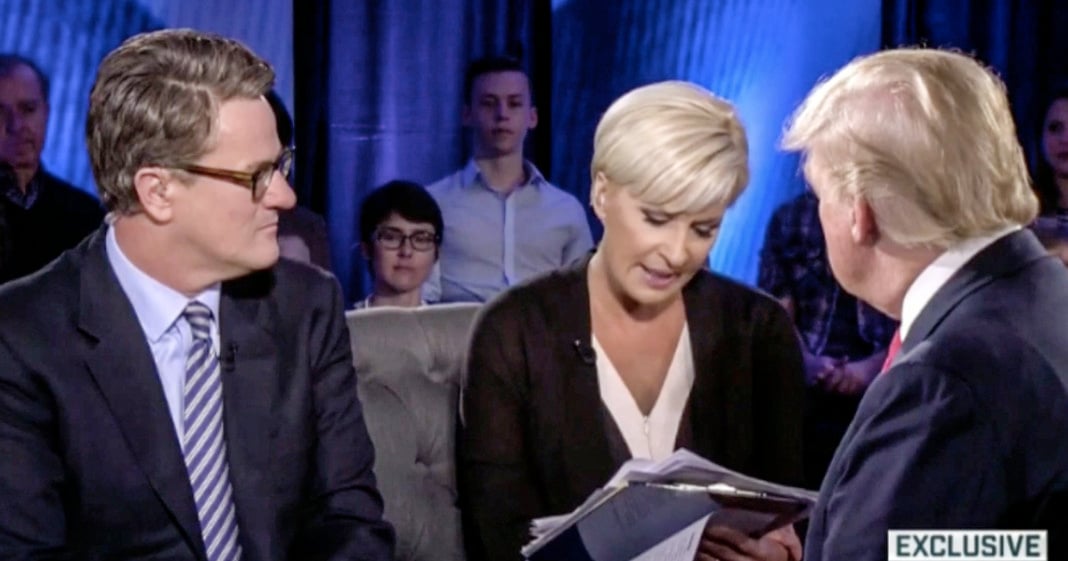 Watching a feud between President Trump and the Morning Joe crew is like watching a battle between a pair of spiders and a snake – you don’t really want either of them to win, but you recognize a particularly harsh blow when its dealt.

On Friday, the ongoing feud between Joe Scarborough and Mika Brzezinski and the President of the United States heated up as the co-hosts postponed their vacation to share new allegations concerning Trump, blackmail, and the National Enquirer.

In an op-ed published in the Washington Post titled “Donald Trump is Not Well,” the couple of conservative hosts called Trump’s relationship with them an “unhealthy obsession.”

According to Scarborough and Brzezinski, at Trump’s direction, the National Enquirer placed incredible pressure on the couple, as well as their family, to request the “spiking” of a scandalous story about the two.

According to the couple, they were instructed – and pressured – to call Trump and beg for a story the Enquirer was holding onto be killed, or it would be released and would scandalize the hosts.

“This year, top White House staff members warned that the National Enquirer was planning to publish a negative article about us unless we begged the president to have the story spiked. We ignored their desperate pleas.”

In addition to the statement in the column, the two appeared on MSNBC on Friday morning to give more details about their accusations, serious charges of blackmail.

Brzezinski said the harassment extended beyond the two public figures, and said that her children received calls pressuring their mother to appeal to the President.

“Let me explain what they were threatening. They were calling my children, they were calling close friends. They were pinning the story on my ex-husband, (but) I knew he would never do that. So I knew it was a lie and they had nothing. These calls persisted for quite some time, and then Joe had the conversations that he had with the White House, where they said, ‘Oh, this could go away.”

Responding to the allegations, President Trump predictably responded on Twitter, possibly confirming the claims made by the two, and lobbing a few more insults their way.

Watched low rated @Morning_Joe for first time in long time. FAKE NEWS. He called me to stop a National Enquirer article. I said no! Bad show

According to this tweet from the President, Joe indeed called and appealed to have the story killed, a request to which Trump said no. Could this mean that Scarborough’s account from the National Enquirer could be true? Did Trump just use Twitter once again to incriminate himself?

The National Enquirer denied Joe & Mika’s account, saying that they were never in communication with the White House regarding their story.

“At the beginning of June, we accurately reported a story that recounted the relationship between Joe Scarborough and Mika Brzezinski, the truth of which is not in dispute.  At no time did we threaten either Joe or Mika or their children in connection with our reporting on the story.  We have no knowledge of any discussions between the White House and Joe and Mika about our story, and absolutely no involvement in those discussions.”

The escalation of an often contentious (but sometimes jovial) relationship between the MSNBC show and the President came after Trump issued two extremely inappropriate tweets on Thursday, attacking Brzezinski on the basis of her physical appearance.

“I heard poorly rated @Morning_Joe speaks badly of me (don’t watch anymore). Then how come low I.Q. Crazy Mika, along with Psycho Joe, came to Mar-a-Lago 3 nights in a row around New Year’s Eve, and insisted on joining me. She was bleeding badly from a face-lift. I said no!”

While this story began as a mere tiff between an immature president and two of his former cheerleaders, what Scarborough and Brzezinski are alleging is incredibly serious – if they can prove that Trump did indeed attempt to blackmail them, it could mean serious consequences for an already scandalized POTUS.