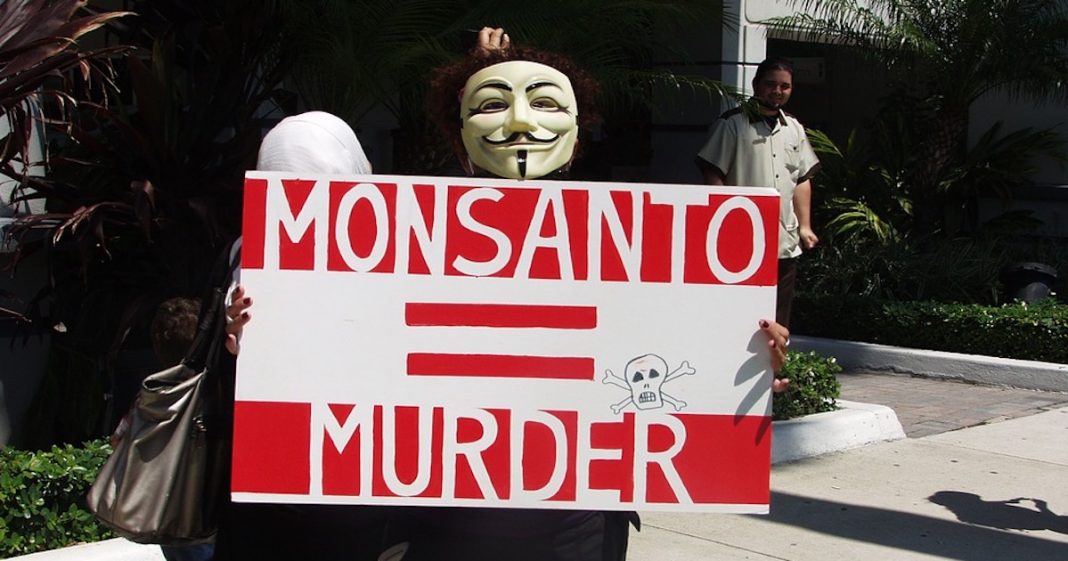 Monsanto lost a key legal battle that may end with RoundUp being labeled as cancer-causing. However, they continue to wage an unprecedented war on the truth. Ring of Fire’s Josh Gay weighs in.

Just last week a California judge ruled that glyphosate, the key ingredient in Monsanto’s herbicide RoundUp will be added to the state’s Proposition 65 list of carcinogenic chemicals.

The state is saying that the amount of the chemical that can be handled safely is 100 times lower than the EPA’s levels.

If you have been following the story, the fact that the EPA doesn’t take glyphosate seriously should come as no surprise – as earlier this year, it was revealed that Monsanto worked to falsify scientific studies and even had a source inside the government working to “kill” an investigation into the dangers of glyphosate.

Not only could we see bottles of RoundUp or other products with glyphosate be required to carry labels saying that the chemical could cause cancer, but so will foods that have been sprayed with unsafe levels of the chemical.

While this is a major victory in the fight against Monsanto’s dangerous chemical, we know that the company has major resources to continue the legal battle. Monsanto has spent millions of dollars to hire scientists to sign their names to ghost-written studies and to hire internet trolls to counter any derogatory comments made about glyphosate on social media sites and they have vowed to vigorously fight California’s ruling.

Even now, stories like ones authored by Reuters’ Kate Kelland attempt to discredit research that shows glyphosate’s deadly side. Kelland most recently wrote – just two weeks ago that key evidence was ignored by cancer research organizations in determining the danger of glyphosate.

Kelland cites the work of an “independent” statistician named Bob Tarone – when in fact Tarone has acknowledged that he is a paid consultant for Monsanto. Kelland also cherry-picked portions of testimony from a scientist from the US National Cancer Institute, Aaron Blair, making it sound as if he hid a study from officials that were reviewing the dangers of glyphosate.

Perhaps, most damning of all, Kelland herself has ties to an organization funded by companies like Monsanto, Bayer, and DuPont. The Science Media Centre works to connect bought-and-paid-for scientists with journalists to deliver more favorable coverage –and Kelland appears in several promo items for the group, including a video and an essay.

Fortunately, Monsanto is finally losing this battle – but if you think it is the end, you are mistaken. You can see that they have still found journalists in the mainstream media, like Kate Kellen, that will do their dirty work. While people are getting CANCER – Monsanto is busy spending MILLIONS of dollars on a sophisticated PR campaign to keep you in the dark.