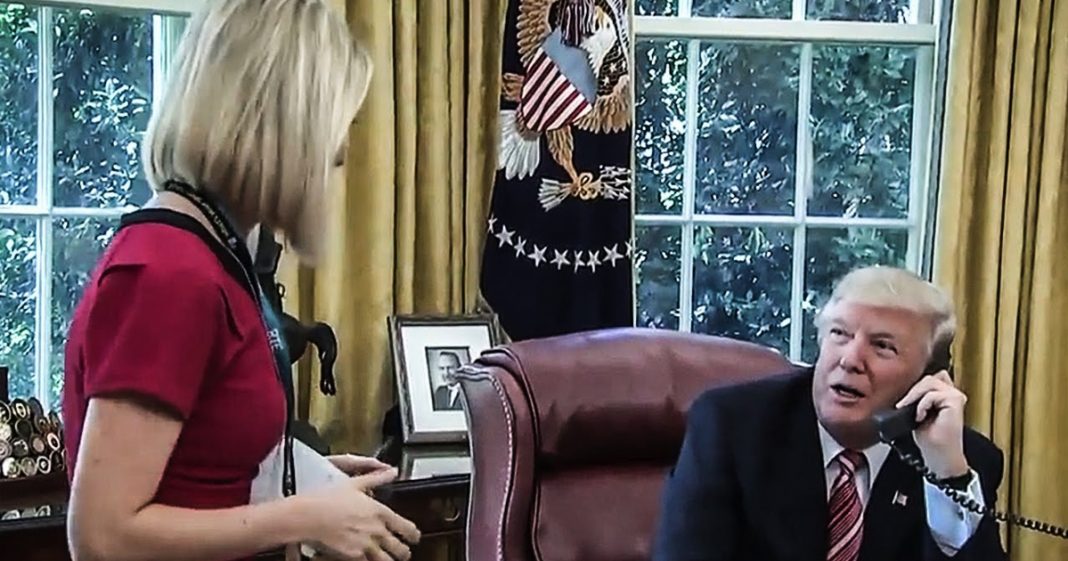 During a call with the newly-elected Prime Minister of Ireland earlier this week, Donald Trump interrupted the call to bring reporter Caitriona Perry over to his desk to tell her how beautiful she is. He then remarked to the Prime Minister “I bet she treats you well,” whatever that is supposed to mean. This is the behavior of a predator and should not be tolerated in any form from the President of the United States (or any human being, for that matter.) Ring of Fire’s Farron Cousins discusses this.

Earlier this week, Donald Trump managed to pull off one of the most disgusting moves of his entire presidency, and guess what? It had absolutely nothing to do with any form of legislation. During a phone call with the newly elected Prime Minister of Ireland, Donald Trump interrupted the call to bring over a reporter, Caitriona Perry, from RTE, an Irish version basically of public broadcast, to let her know that she’s beautiful. Take a look at the clip and watch what Donald Trump, our President of the United States, did while on a diplomatic call with a foreign Prime Minister.

Donald Trump: Caitriona Perry. She has a nice smile on her face, so I bet she treats you well.

Now, Republicans were quick to point out, “Look, she’s laughing and smiling. She didn’t mind it.” You know what? She did. After the incident happened, Miss Perry got online and said that the whole thing was truly bizarre. That was the best way that she could describe it without insulting or being accused of making something out of nothing, which all too often happens to women in that situation. What Donald Trump did there borders dangerously, and in my opinion, crosses the line into full blown harassment.

While he’s on the phone with a head of state, and people think this is okay? People think this is normal behavior, to objectify a female reporter like this in the Oval Office, while talking to a Prime Minister? That is undoubtedly the most disgusting thing I’ve seen Donald Trump do while President of the United States. This is behavior that we should not tolerate from any human being in this country, certainly not the President of the United States. Because you know what happened when that clip went online? Everybody saw it. Not just the United States, everybody. Everybody who has access to internet videos online has the ability to go and take a look at that clip and see what a disgusting, embarrassment the United States’ President really is.

That’s partly why the image of the United States is declining all over the world, because of this man. Not necessarily because of that incident, these polls came out before that, but that’s how they view him. To be honest, anyone who’s shocked by this really wasn’t paying attention during the election. I mean, this man is on tape saying that he likes to grab women by the genitals. He likes to push them up against the wall and kiss them, even if they don’t want it, and granted, he was married during these times when he claimed to be doing this, but I’m sure Melania doesn’t care about that, right?

This is a disgusting, psychotic individual, sitting in the Oval Office every day, making decisions that affect every single person on this planet. Given the opportunity, he would sexually harass any woman that he found worthy of it, and his little comment about, “I’m sure she treats you well,” that was one of the most disgusting scenes there, because it doesn’t take a genius to read between the lines there, and understand what Donald Trump is implying about this female reporter and her relationship to that Prime Minister. This is a disgusting man who needs to be removed from office. I can’t say that enough. He is a danger, not to just this country, but most importantly, to women everywhere.

I would not trust him around my wife or my daughter, my mother, my sisters, anyone. Donald Trump should be a registered sexual predator. That’s the kind of behavior he exhibits, and I’m sure a good psychologist spending five minutes with the man would absolutely slap him with that diagnosis. But instead of that, instead of being him diagnosed, instead of him having to go door to door and tell people he just moved in, he’s a sexual predator, no, we put him in the Oval Office as President of the United States, because that’s just the kind of country we’ve become.