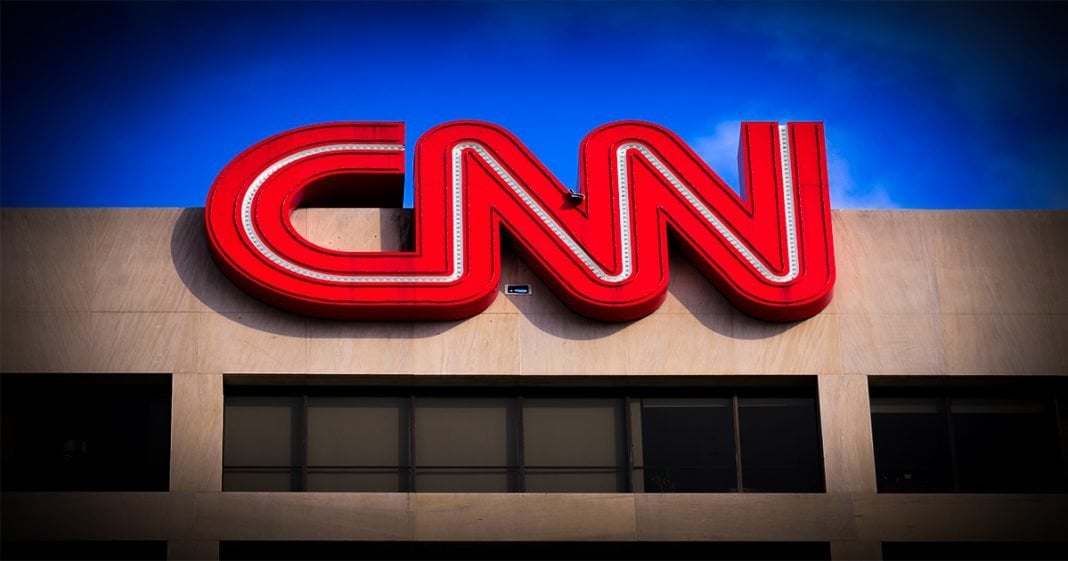 CNN has had a rough month. Between publishing false stories and journalists caught on camera saying that the network’s coverage of Russia is “bulls**t,” CNN’s credibility has taken a significant hit. Ring of Fire’s Josh Gay discusses how this only serves to legitimize Donald Trump’s war on media.

This is why I hate the corporate media. When I have to turn to Buzzfeed, Breitbart, “gotcha videos” to get a story on CNN, that proves our nutcase of a president is RIGHT about the media – it is a crazy world.

By now, I hope that you’ve heard about CNN’s now deleted story that tried to connect the dots a little too conveniently between Trump advisors and a Russian investment firm. After pressure from BuzzFeed – CNN acknowledged that the story did not live up to their editorial standards.

The three staffers involved in the story have resigned, including journalist Thomas Frank who had the byline for the story – however CNN has published articles saying that deleting the story didn’t mean it wasn’t true, but that it simply wasn’t properly vetted.

Three journalists, including a Pulitzer-prize finalist and a Pulitzer winner –  don’t resign over a “workflow issue.”

Don’t forget that this is the same network that directed protesters in London earlier this month and also had BREAKING NEWS regarding James Comey’s testimony – which turned out to be completely false.

Now – there is new undercover video exposing a CNN producer admitting that the network is sticking to the Russia, regardless of facts – for the ratings and video of CNN personality Van Jones calling the Russia story a “nothing burger.”

Now, I have to preface this by saying the video came from notorious conservative “gotcha journalist” James O’Keefe and his Project Veritas.

O’Keefe has been found to heavily edit video clips and engage in less-than-ethical practices to get his information. So, I viewed the Project Veritas video with a critical eye.

It is also worth noting that the producer caught on tape, John Bonifield, worked mostly for CNN’s health segment. It does not appear that Bonifield worked directly on Russia reporting.

However, from the tape and Bonifield’s resume, he obviously has fairly high-level access at the network and his quotes are not chopped up sound bytes.

In the tapes, Bonifield talks about throwing aside journalistic ethics in favor of pushing the business of media – aka ratings. When asked why CNN continues to push the Russia narrative, despite an admitted lack of evidence Bonifield said: “It’s the ratings” – and said the President is probably right by calling the investigation a witch hunt.

Bonifield even recounted a conversation attributed to CNN CEO Jeff Zucker – saying that after covering Trump’s withdraw from the Paris Agreement that journalists were directed to get back to Russia.

Zucker himself is rumored to be on the chopping block when AT&T finalizes their deal to take over Time Warner. News is not a focus for AT&T and Zucker’s management style does not fit into AT&T’s way of doing business.

I get it – Russia is a sexy story and there are just enough facts out there to keep things rolling – like evidence that Russia attempted to hack our voting machines. But, thus far each smoking gun we are told about simply doesn’t hold up.

Are the people surrounding the Trump Administration slimey? yep. So are most folks in establishment politics. Are their shady business deals that took place? Probably. But the American public keeps begging to find some way that Donald Trump is somehow directly involved with Russian espionage. So, CNN has an obligation – an obligation to their shareholders and their advertisers to feed the public more and more garbage on this Russia story.

And CNN isn’t the only one. Glenn Greenwald of The Intercept details how The Washington Post, MSNBC, The Guardian, and even CSPAN jumped in the Russian narrative with false claims – head first – only to pen weak retractions much later.

I don’t want to go all the way down the rabbit hole chasing the conspiracy of corporate media. There are very good journalists that are doing very good work. However, a lot of it is has an unstated agenda and is heavily influenced by ratings and clicks.

The problem with what CNN has done is that it simply proves Donald Trump and the unhinged conservatives right. They have railed on fake news and insisted that the negative coverage of the president is because of a concerted effort by the media to undermine the President.

Now, Trump and the right-wing nutjobs have evidence that the corporate media is “out to get him” – the last thing we need is to feed Donald Trump’s ego and CNN gave him exactly what he wanted all the while heightening tensions between the world’s two biggest nuclear superpowers.

We have already seen Sarah Huckabee Sanders stand at the podium and weaponize CNN’s scandal as justification for the White House’s war on media.

Now, because of the backlash – CNN has exactly ZERO stories above the fold on Russia. Yet – you know what – people continue to back CNN and the corporate media – because they are reporting exactly what they want to hear. Despite having truly talented journalists, sensationalism sells.