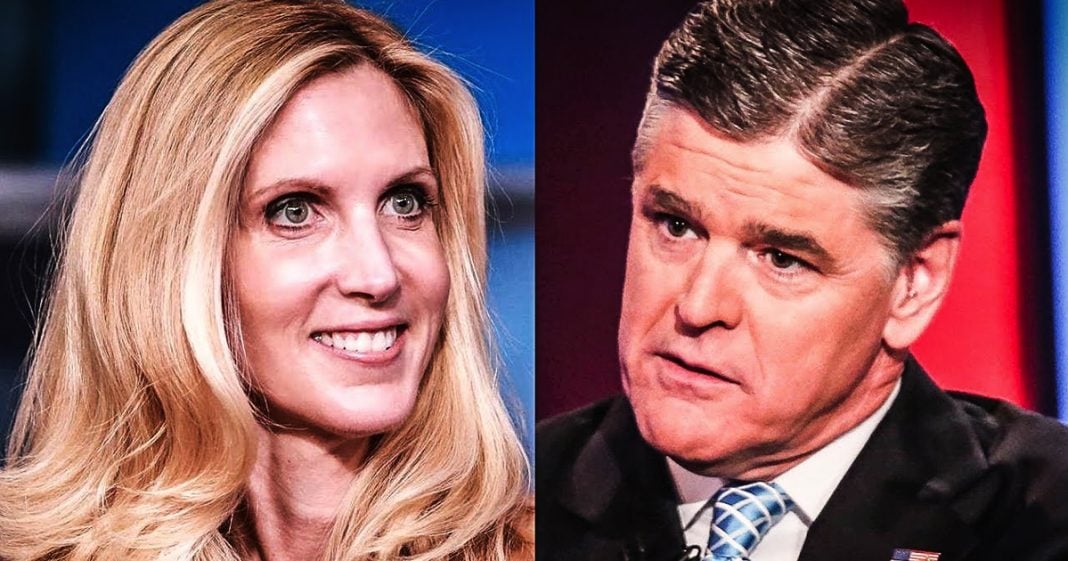 Ann Coulter lashed out Fox News host Sean Hannity for being a blind loyalist to Donald Trump, saying that Hannity would likely endorse Communism if Trump said it was good. Hannity fired back by saying that Coulters falls “in and out of love” with Republican politicians all the time and that she bores him. It’s the battle of the despicable Republican heavyweights! Ring of Fire’s Farron Cousins discusses this.

On Wednesday, right wing pundit and author, Ann Coulter, decided to write a blog post going after Sean Hannity for his relentless support of President Donald Trump. Now, if that seems a little odd to you, it’s because this is highly irregular for somebody like Ann Coulter. Now, we know in the past, Ann Coulter has come out and said that she’s losing faith in Donald Trump. We’ll get to that reason in just a minute, but in this latest blog post, Coulter claims that Sean Hannity, in his zeal to support Donald Trump, would actually endorse communism if Donald Trump came out and said it was a good idea. Hannity would endorse communism if Trump decided to enact the entire communist manifesto, is what Coulter wrote in the blog post.

Now, she also went on to say that Donald Trump needs to stop going after all these people from Goldman Sachs and putting them in his cabinet, but the main point is that she’s mad at Sean Hannity because he refuses to offer any criticisms of Donald Trump. Well, on Twitter, Sean Hannity fought back saying, “Ann, you fall in and out of love with Republicans all the time,” and proceeded to list Trump, Romney, Christie, and many others, but overall, Hannity told Coulter, “You bore me.”

Now, this is a fun little feud happening right now because it’s two sides of the exact same coin. The only reason that Ann Coulter is upset with Donald Trump is because his policies haven’t been mean enough, because he has not built that border wall that nobody wants and nobody can afford. That’s what Coulter is so pissed off about and she’s mad that Sean Hannity’s not holding him accountable for not building the damn wall. In fact, Coulter even said that the Republican version of healthcare plan is communism somehow, even though all it is is a massive tax giveaway for the wealthy, cutting 22 million people off health insurance, that in Ann Coulter’s delusional brain is communism.

Now, Coulter and Hannity have been friends for a long time. Sure, they’ve had a couple little spats here and there, and this one’s going to blow over as well, but again, they represent two sides of the same coin. Coulter is representing the alt right at this point, you know, those border line supremacists who want that border wall, who do not want immigrants, who want the travel ban, who believe that anybody who is a non-white Christian is some kind of terrorist, that’s what Coulter is representing. Hannity on the other side is representing the Republican chair leaders who believe that their leaders can do no wrong, even when they lie to us, even when they don’t uphold their promises, and even when they act like complete buffoons anytime they get on Twitter or in front of a camera, which is what Donald Trump does.

Sean Hannity will defend everything this president does. Ann Coulter’s 100% correct about that, but given the choice between the two, I would rather seen a numb skull like Hannity blindly support this president, poison his own audience with this, than somebody like Coulter who’s pushing Trump to build the border wall and ban any non-white from coming into this country, because that’s what we’re looking at here. That is the divide that has developed within the Republican Party at this point. You have Sean Hannity who wants the Republican Party to be mean to everybody, but then you have Ann Coulter who wants the GOP to be downright despicable towards everyone.