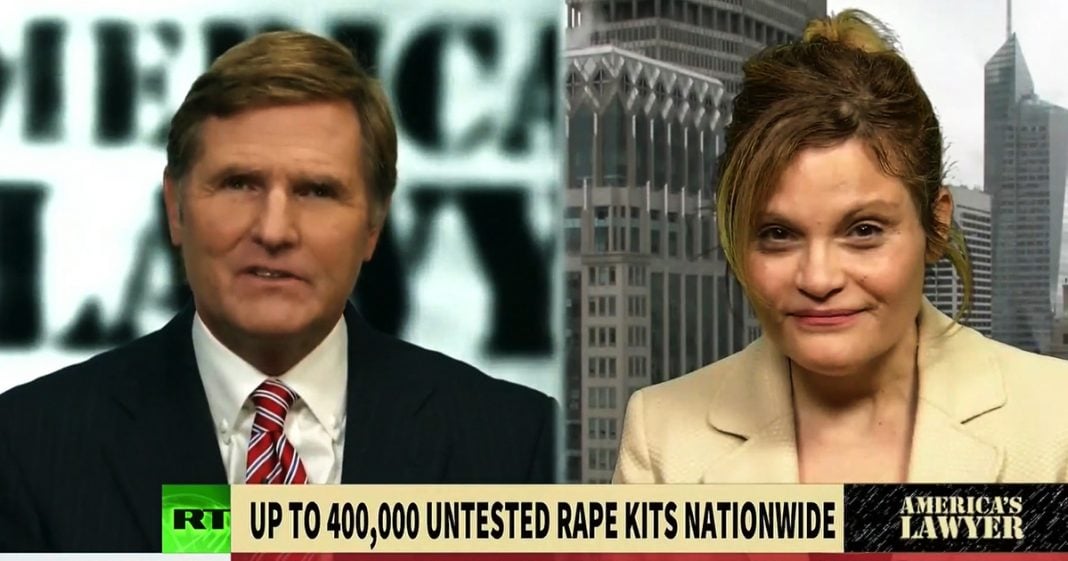 Via America’s Lawyer: Mike Papantonio talks to Natasha Alexenko, Founder of Natasha’s Justice Project, about the 400,000 untested rape kits across the country.

Papantonio: Every year there are about 300,000 sexual assaults committed in America. While this number has fallen by more than half since 1993, the vast majority of these cases are never solved. According to RAINN, the country’s largest anti-sexual violence organization, for every 1,000 rapes, 994 perpetrators will walk free, even though more than 300 of these assaults were reported to law enforcement. One of the biggest reasons for this lack of prosecution is that tens of thousands of kits containing forensic evidence collected by medical examiners from sexual assault victims are sitting on the shelves of police departments all across this country, and they’ve never even been tested for DNA. In fact, there are as many as 400,000 of these unexamined, completely unexamined DNA kits nationwide.

Joining me to talk about this crisis is Natasha Alexenko, sexual assault survivor and founder of Natasha’s Justice Project, an organization trying to eliminate the rape kit backlog, which is where we begin. Natasha, can you start by telling your story and how you got involved as an advocate for this extremely important issue?

Natasha: Well certainly, and thank you so much for having me today. I, myself, was raped and robbed at gunpoint by a stranger in 1993. To say that it changed my life is a grave understatement. Of course, it not only affected me, but affected everyone in my life, my family, my friends. It was absolutely devastating. I was a college student at the time, and I had a specific path and goal in life, and that all got derailed. It was very, very, difficult.

I submitted to a rape kit exam immediately following the assault. Of course, you’re first instinct is to take a really hot shower, but your body has become a crime scene. It’s important to ensure the integrity of any evidence that can be found on your body so that the evidence can be used to eventually find the perpetrator. Having gone through that really grueling process, unbeknownst to me that rape kit that was taken so meticulously, that was so very difficult to take, sat on a shelf collecting dust for 9 1/2 years.

Papantonio: What do you think are the biggest factors that led us to the point that we are today, where there are as many as 400,000 untested kits sitting on the shelf across this country, like you’ve described? It’s the heart of the examination. It’s the heart of what a prosecutor needs to get a conviction. What’s happened to where they’re just sitting on shelves now? It’s an outrageous story.

Natasha: Yeah, it is truly an outrageous story. We have a right to be outraged, because this is a public safety issue. The man that raped me was on a nationwide crime spree. A whole bunch of different crimes, burden on taxpayers, burden on law enforcement, so it’s something the public should be concerned about.

How we got here, I wish there was one specific thing, because then we could easily take care of it. Certainly, DNA is a technology that has developed far quicker than we’re able to as far as keep up with. Understanding that it’s such a great investigative tool, that’s certainly part of it. The second part of it is really encouraging law enforcement to gain training to understand the neurobiology of trauma. What a victim, after assault, goes through. We were reading through reports where kits had not been submitted, or law enforcement officials simply said, ‘She was laughing during the interview, I don’t think it’s a plausible rape,’ and not understanding that after that kind of trauma, we all have different reactions. The body has a way of just making us act in ways that, perhaps, we wouldn’t conventionally think a rape victim would act like, solemn, crying. They may laugh. They may be completely quiet and in a state of shock. Really, there’s been a great effort to train law enforcement to understand how a victim reacts after that kind of tremendous violence.

Papantonio: New York City and Los Angeles have both been able to clear their rap kit backlogs. How did they do that, and what should we learn from their examples? Why could they get it right, but we have police all over this country that don’t seem to be able to get it right? What’s the difference?

Natasha: Certainly, New York City has a really innovative district attorney. The NYPD is wonderful. Everyone goes through significant amounts of training. New York City had 17,000 rape kits that were unprocessed. What they did was they tested every single one. They just put them out on pallets. They sent them out. They tested what they could inside. New York City was really in a unique situation.

The reason why between 2000 and 2003 we’re looking at 17,000 rape kits was because they weren’t connected to CODIS which is the national database. It’s like the fingerprints, but it’s for DNA, so you’re able to find a perpetrator, like in my case, a stranger with their DNA. They weren’t connected at that time. Now, we’re in 2017. We’re connected to CODIS, so there’s really no excuse. People really should take New York City as an example, because we’re looking at a 70% arrest rate for rape in New York. That number is far less in the rest of the nation. It’s almost like rape isn’t a crime. Truly.

Papantonio: Let me ask you, another major issue that we see constantly in these cases is statute of limitations. In some cases, when it comes to prosecuting sex crimes, this is the biggest obstacle. How has this problem impacted the fight for justice for sexual assault survivors? Here, part of the problem is, let’s not forget where we started, you have an officer that’s taking a kit where we have DNA. It’s going to help us understand who is this person, who is the perpetrator, but it sits up on a shelf. It’s never tested, we never find out about the DNA, and the perpetrator goes on to rape somebody else, and somebody else, and somebody else. Give me your take, first of all, this statue of limitation issue, don’t we have to get better control of that, I think, nationally?

Really, throughout the country, prosecutors and law enforcement have found innovative ways around the statute of limitations. Of course, Advocates have worked so hard to eliminate the statutes in various states across the country. In the states where … Even though the statutes have changed, they still have to go by the law prior to that being changed. Like California, they’re able to show a pattern, so they may not be able to bring that case to trial, but they can show a pattern in that particular criminal in that he had other hits in the CODIS database. There’s other sorts of things like that. In Texas, they allow kits that have passed the statute of limitations, they allow those survivors to give a victim’s impact statement at the trial of the perpetrator who’s perhaps coming on for another crime that was in the statute of limitations.

That’s really innovative ways we’re doing it. Is it unfortunate? Absolutely. It’s so unfortunate. It’s an archaic law that was developed before we had DNA, which doesn’t forget, when we were primarily dealing with a witness and what their memory … How long does memory last? Well, we know it doesn’t last as long as DNA.

Papantonio: Well, look, thanks for joining us, and thank you for the work that you’re doing out there. I hope you continue to make inroads. It sounds like you’re making some important inroads already. Thank you for joining us.