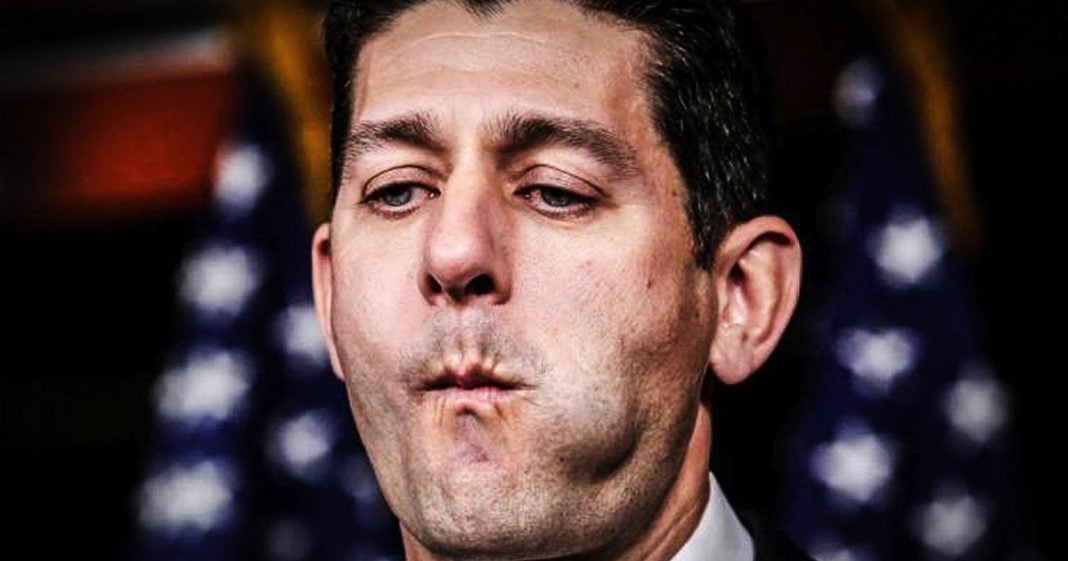 During an interview with Fox News, House Speaker Paul Ryan insisted that the Republican healthcare plan wasn’t going to kick people off their insurance. Instead, Ryan suggested that 22 million would simply make the “choice” to not buy health insurance. This man is delusional. Ring of Fire’s Farron Cousins discusses this.

During an interview that aired at Fox News earlier this week, House Speaker Paul Ryan defended the Republican health care plan by saying that there’s 22 million people in this country who simply either don’t like health insurance or they simply don’t want health insurance. The interview was Fox and Friends’ Brian Kilmeade asking Paul Ryan about the CBO score that said that 22 million people would be losing their health insurance under the Republican plan. So Paul Ryan decided to spin it as these aren’t people who are getting kicked off their plans. These are people who are no longer going to be forced to buy plans that they don’t like or that they simply don’t want.

There you have it folks. According to House Speaker Paul Ryan, it’s okay that these 22 million people in the United States are going to lose their health insurance coverage because they didn’t even want it in the first place. They like going to the doctor and paying full cost for a check up. They love walking into a pharmacy and paying $600 for a bottle of six pills. These people love that. They don’t want to have insurance come in and have to pay for pieces of that. I guess that’s how Paul Ryan’s brain is interpreting this.

Now Ryan did go on to explain that his health care plan, the Senate health care plan, gets rid of the individual mandate, which basically, according to Ryan, forces people to buy health insurance. The reason that Obamacare was set up that way was so that the shared responsibility of everybody in this country of having to pay for the uninsured went down. It saved us money, every one of us. That’s why that existed Paul. But according to Paul Ryan, these people are no longer obligated for fear of penalty to go buy a health insurance plan, so they’re free. They’re out from under this Obamacare burden that we’ve been suffering under that’s allowed us to go to the doctor and get medications and get treatments that we desperately need. We’re no longer burdened by our own health needs.

Here’s the thing that Paul Ryan is trying to avoid talking about. His plan, the Senate plan, gets rid of the funding, gets rid of most of the subsidies that helps low-income people pay for insurance. That’s why people lose their insurance coverage under the Republican plan. It’s not because they don’t want it. It’s because they can’t afford it without the assistance that we had been giving them. We’ve been giving them that assistance since the Affordable Care Act became law, and you’re taking it away. They can’t afford it. They have said themselves … Even Trump supporters have come out and said, “If you pass your health care bill, I can’t afford it.” It’s not that they don’t want it.

That’s like saying the homeless guy on the corner doesn’t want to buy a house or that he doesn’t like to have a house. No, I’m sure he wants to, but he’s choosing not to because he doesn’t have the money for it, Paul Ryan, and that’s the difference. When you can’t afford something, your choice is taken away from you. That’s exactly what the Republican health care plan is going to do. It’s going to take their choice away. Essentially the government, the Republicans I should say, are making those health care choices for them. It’s almost as if the Republicans and the government are acting as some sort of, I don’t know what you’d call it, maybe a death panel, telling people that you can’t afford health insurance because we’re not going to give you the subsidies and the financial assistance that we had been giving you for years. You’re on your own so go make the choice to drop your health insurance plan because you can no longer afford it.