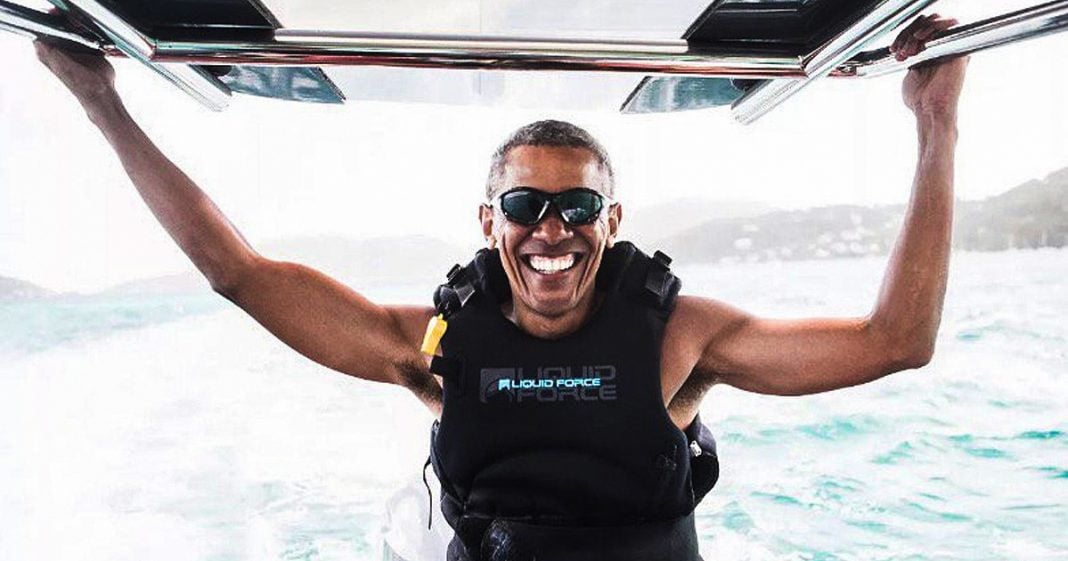 At the height of the healthcare debate this week, Fox News devoted only a few minutes to the issue that Republicans have been pushing for years. Instead, the network chose to attack the Obama family for going on vacations, claiming that the Left was furious at Obama for having fun. Ring of Fire’s Farron Cousins discusses this.

There’s no question that the biggest story in the United States for this entire week, and to be honest last week as well, has been health care. Specifically, the Senate version of the American Health Care Act.

In spite of that, Fox News has tried desperately to do anything possible to avoid talking about health care during their prime time lineup. In fact, on Monday evening, most of the shows did not even mention the health care bill. Instead, Sean Hannity decided to push the fact that there was absolutely no evidence of collusion between Donald Trump and Russia and that’s why Donald Trump’s gonna walk away scot-clean on this. Hannity seems to be forgetting that the investigation is actually ongoing and they haven’t released their findings, so we technically don’t know if there was collusion, but we’ll find out.

Tucker Carlson on the other hand, decided to talk about the Supreme Court decision on the travel ban. He talked about an initiative that was passed up in Alaska and just kind of danced around the issue.

But one of the most important stories, I guess, that Fox News has been pushing for the last few days, they’ve done this online, they’re doing in on their television shows, is the fact that the left, liberals, democrats, are super pissed right now about the fact that the Obama family is going on these extravagant vacations. That was the top story that Fox News actually had on their website for most of Tuesday afternoon, several different little stories about it.

Here’s the thing. As somebody who’s pretty fairly involved I would say, with liberal progressive policies, I sit at a computer all day and read news stories and do research, the only people I have seen talking about the Obamas going on vacation is Fox News.

Liberals, progressives, we don’t care. We don’t care. Do you know why? Because he’s not the president anymore. His kids are on summer vacation from school. They have a ton of money and they can do this. They’re private citizens now. Nobody’s out there bitching and complaining about the fact that Obama’s going on vacation with his kids and wife. He is entitled to do that.

They’re trying to divert our attention back to Obama and say, ‘Look. This guy just can’t stop going on vacation.’ Meanwhile, Donald Trump is going to play golf at one of his own resorts, an average of once every four and a half days since taking office as president.

This is a false comparison, folks. You can not compare the Obamas, who are private citizens, going on vacation, to the vacations of a sitting president. If Obama was the commander in chief right now, might be an issue. There’s things happening that the president needs to be dealing with at the moment. But that person is not Barack Obama. That person is Donald Trump.

And this just shows you how pathetic Fox News has become, basically when it comes to covering any important issue. They’re not talking about it, they’re not educating their viewers, they’re not informing their viewers, because they know they don’t have a leg to stand on. They know if they actually explain to their dim-witted viewers what this health care bill entails, they wouldn’t support it. They wouldn’t support republicans anymore.

And since there’s absolutely no good way to spin this, Fox is simply moving on, trying to create fake controversy about the fact that Barack Obama, Michelle Obama, Malia and Sasha, went on a vacation, as if anyone on the left actually cares about that.