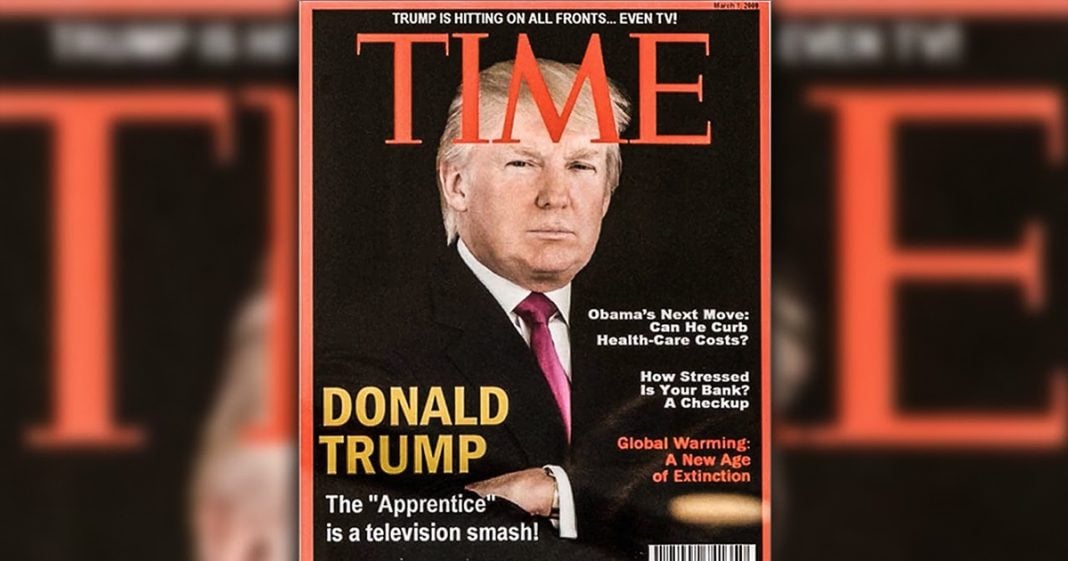 Donald Trump – the king of calling news outlets “fake” – has fallen victim to fake news himself. According to reports, the President has an issue of Time Magazine hanging in four of his golf resorts that features Trump on the cover. The only problem is that the issue doesn’t actually exist, it was just a photoshop effort by either a member of his staff or a fan. Ring of Fire’s Farron Cousins discusses this.

One of the more bizarre stories that we’ve seen from the Trump administration since they took office emerged earlier this week when it was revealed that Donald Trump has a fake issue of Time magazine, a fake cover of Time magazine hanging in at least four of his golf club resorts.

A fake issue, that didn’t ever exist. It was never created by Time, it was never published, never printed, never dreamt of by the folks over at the Time organization. Yet Donald Trump has it hanging prominently in the dining areas of four of his resorts.

What does this fake cover say? Well, it’s got a great picture of Donald Trump on it and it says, “Donald Trump, the Apprentice is a television smash. Trump is hitting on all fronts, even TV.” Wow, such great praise. Unfortunately, it never came from Time.

Donald Trump, at this point, we don’t know who created these covers. We don’t know how Trump got his hands on them, and we don’t know why he decided to hang it up without ever bothering to look and see if it was real. In fact, the date printed on the magazine was not even a date that a magazine from Time actually came out. The closest one to that date actually featured Kate Winslet on the cover.

Now, for a man who has made his entire presidency about calling out fake news, he sure does seem to fall for fake news quite frequently. Probably more than the average American. In fact, I don’t know of too many people who subscribe to the fake news outlets that actually have them printed out and hanging in their businesses like Donald Trump.

This is a man whose ego is so fragile that he doesn’t care if it was ever actually put out by the magazine. He saw it, somebody showed it to him, he loved it, and he wanted it hung up. Either that or the people who work for him discovered it or created it and decided, ‘This will make him happy because he’s such a fragile egomaniac. Let’s just put it up in the dining room anyway.’ That’s what’s happening under Donald Trump. That is the President of the United States.

Now, in the past Trump has even bragged about how many times he has been on the cover of Time magazine. Time actually had to come out and say, ‘You’re actually wrong. You were not on the cover that many times. In fact, you were only on the cover before you entered politics one time, and that was back in the 1980s.’

Furthermore, Trump has actually said that he’s been on the cover of Time magazine more than anyone. When, in fact, that is also not true. Richard Nixon, actually, has been on the cover far more than Trump. I make that comparison because that’s probably the closest person, you know, who really captures or embodies what Donald Trump himself is all about.

The bottom line is this, Donald Trump fell for fake news. Whoever created this, whoever disseminated it, good job. You pulled a fast one on the president. He honestly believes he was on the cover for that, even though, I don’t know, maybe he’s created a false memory of that where he does remember sitting down for that picture. Either way, when it comes to fake news, when it comes to sharing fake news and legitimizing fake news, nobody does it better than Donald Trump.