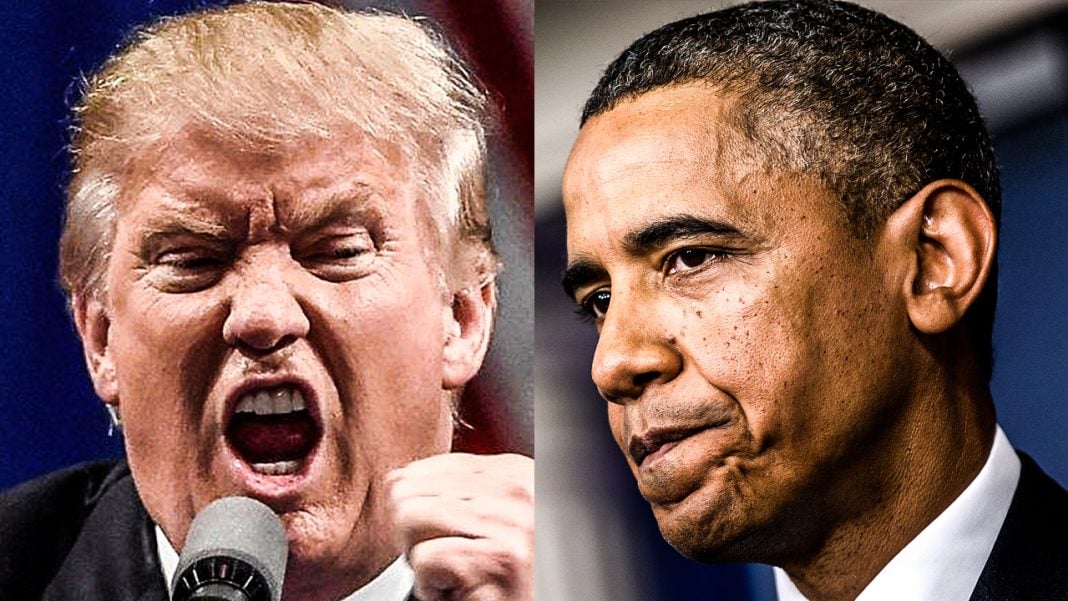 Donald Trump appears to be losing a little more of his mind every day. To begin this week, he launched into yet another Twitter tirade where he accused former President Barack Obama of somehow colluding with the Russians during the 2016 election. Ring of Fire’s Farron Cousins discusses this.

President Trump doesn’t seem to understand that President Barack Obama is actually no longer the president. He spent most of Monday going after Obama in an unhinged Twitter rant where he literally accused the former president of committing a felony. In his Twitter rant, President Trump said that the reason that Barack Obama did absolutely nothing about the CIA intelligence that showed Russian meddling as far back as August when Obama was handed this … The reason he did nothing was because one, he expected Hillary Clinton to win and he didn’t choke according to Trump, he colluded or obstructed, which is ironic considering the fact that that’s literally what President Trump is currently under investigation for allegedly doing with the Russians. So now, Donald Trump has somehow turned it around and it’s not the Trump administration that colluded and obstructed. No, it’s President Obama who somehow I guess colluded with the Russians to help Trump win and he didn’t say anything because he thought Hillary was going to win and nothing at all makes sense in anything Donald Trump has ever said.

This is utter insanity, folks. Donald Trump is getting so desperate to divert attention from his constant scandals that he is now trying to invent things in his brain to show that it was actually President Obama who did all the colluding and all the obstructing. What happened according to reports was that Obama was trying to take a little bit more of a practical approach to whatever Russia was accused of doing, whatever we have evidence of them doing. He didn’t want to immediately jump out there, send the nation into a Red Scare panic by saying that Russians hacked into whatever. He was smart about it. You should try that sometime, Donald. Maybe don’t jump on Twitter and just spill your guts about every secret you’ve ever learned and take a calm, practical approach. It’s called diplomacy. Might work well for you.

That’s what Obama did. But the other side of this coin is the fact that if Trump is admitting that Russia did hack DNC servers or whatever or they meddled in the election, doesn’t that kind of prove the other stuff that’s been reported? I mean Trump’s the one who’s been saying that there was no meddling whatsoever but now he is saying there was meddling and Obama knew about it, the CIA knew about it but they were colluding and obstructing because they thought Hillary would win. If you’re following along at home, I know it’s hard to make sense of any of this but what we do know is that this Russia story is not fake news, it’s not a nothing-burger. There is something to it. Whether or not Donald Trump colluded with them or his campaign colluded with them is the question that we don’t know. Whether Obama did, I guess we technically don’t know but any logical person could probably come to a pretty reasonable conclusion on that.

But we do know that they meddled, okay? That’s not up for discussion or debate anymore, folks. Those of us who were kind of holding out saying we wanted evidence, well guess what? The evidence is there. Now the people who say that it didn’t happen are ignoring that evidence which we cannot do. But the bottom line is that Donald Trump is starting to get scared. That’s why he’s coming out attacking the former president, still attacking Hillary Clinton as if he’s rerunning the 2016 election in his head and meanwhile this investigation being conducted by Bob Mueller is getting closer and closer to Trump himself as he watches all his little allies around him, Sessions, Kushner, Pence, everybody has lawyered up because everybody is expecting the worst from this investigation and from what we’ve seen so far, the worst is yet to come.