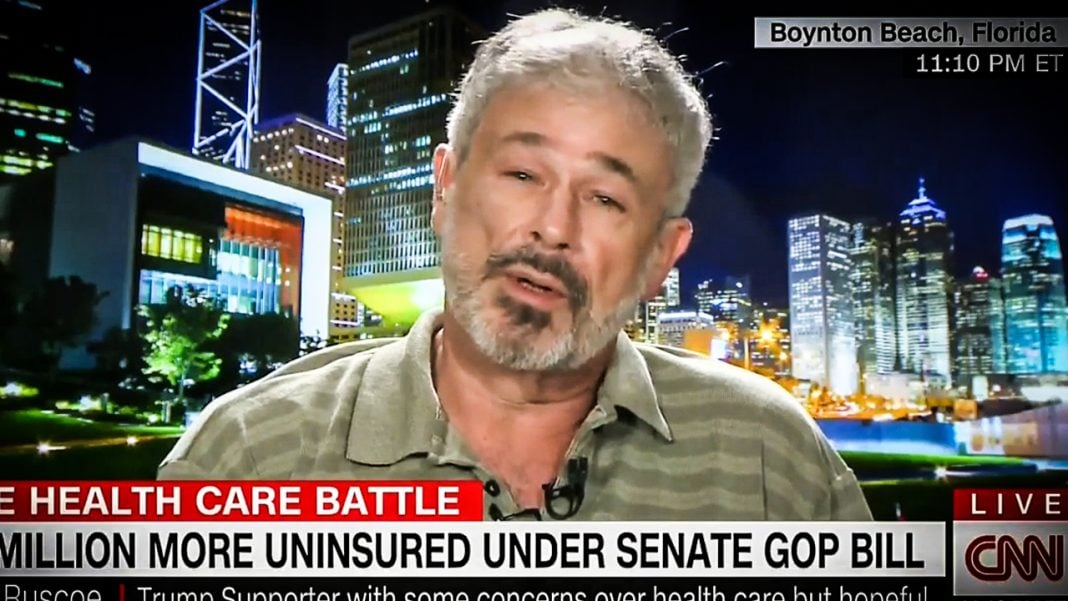 CNN’s Don Lemon interviewed a Donald Trump supporter who appeared to get emotional when discussing the fact that he and his wife will lose their health insurance coverage if Obamacare is repealed.  Is he surprised by this?  He voted for people who told him they would do that, so what did he expect?  Should we feel sorry for him? Ring of Fire’s Farron Cousins discusses this.

Farron:
CNN’s Don Lemon actually had a really interesting segment the other night where he brought on a Donald Trump supporter and asked him about his thoughts on the Republican healthcare bill. Take a look.

Lemon:
Bob, I’m going to bring you in now, because you’re a lifelong Republican, yet you and your wife are insured through the ACA, through Obamacare. What will happen to that insurance if Obamacare is repealed?

Bob:
We probably won’t be insured.

Lemon:
Do you know what it would cost you to get insurance on an open market? Could you afford that?

Farron:
My gut reaction after watching that clip is to be overwhelmed with sympathy for this man who understands that he, his wife, his family, they’re going to lose their health insurance because of what these Republican bills, the one in the House, the one in the Senate, because of what they do to people. At the same time, part of me can’t help but feel like you kind of deserve it. I know that is a horrible thing to say, and I don’t think this man deserves to lose his health insurance. I don’t think anybody does, regardless of party affiliation. But he voted for this. He freely admits that, he’s been a Republican all his life, and so if you vote for someone who says they’re taking this thing that you depend on away from you, what the hell do you accept to happen?

We have seen so many stories come out, whether it’s people whose loved ones have been deported because of Donald Trump’s immigration policies, yet they supported Donald Trump and they’re shocked by this. The healthcare bill, same thing, people are shocked by this. “I supported this man, how could he do this?” Because he told you he was going to do it. When Republicans came out and said, “We’re going to repeal and replace, we’re going to give you something better,” where were the specifics? Where were the specifics? All you voted based on was somebody saying that, “We’re going to give you something better. I’m not going to tell you what, because we have no frickin clue, even though we’ve been talking about it for seven years. We didn’t bother to actually do the leg work, but don’t worry. You can totally trust me if you vote for me, I’m going to do this thing.”

Come on, people. You have to wake up a little bit. The Republicans are supposed to be the party of personal responsibility, yet Republican voters don’t want to take voters for the fact that they put these people in office and these people are doing what they said they would do. In the last 17 years, when was the last time a Republican passed legislation that helps middle class and under class American citizens? Seriously. When was the last time? I can understand being duped occasionally, it happens to the best of us, but after 17 years, 17+ years of being duped and knowing that everything this party has done has been to benefit either corporations themselves or the wealthy CEOs who run those corporations, at some point you have to realize that they’re lying to you.

If it took 17 years for that realization to happen, then yeah, part of you kind of deserves it. And I hate to say that, I’m not that kind of person, but Republicans have been doing this for years, people. They do not care about you. If you are not a millionaire, or more, they don’t care. If you don’t believe it, go back and look at the history of their legislation this century. Not a single bill has been passed by Republicans that is designed to specifically and only help middle class or below. Everything that’s disguised as a middle class whatever has little things built in to actually benefit the 1% more, to benefit corporations more. That bankruptcy bill that George W. Bush signed in 2005, you know what it was?

It wasn’t a way to help American citizens with bankruptcy filing, no. What it did was give a massive handout to credit card companies and said that if a person files for bankruptcy, you no longer get to get out from under your mountains of debt, you still owe it to these companies. While the middle class was cheering this as some kind of relief, it actually screwed them over even more. Destroyed their credit, and they still owed the money to the big banks. I do feel some sympathy for this man, I don’t feel like he should lose his health insurance, but at the same time, if you claim to have been a lifelong Republican and you are in the middle class or the under class, you have to pay attention to what these people have done and understand that they have never, at least sure as hell not in my lifetime, ever done anything to help the middle class.