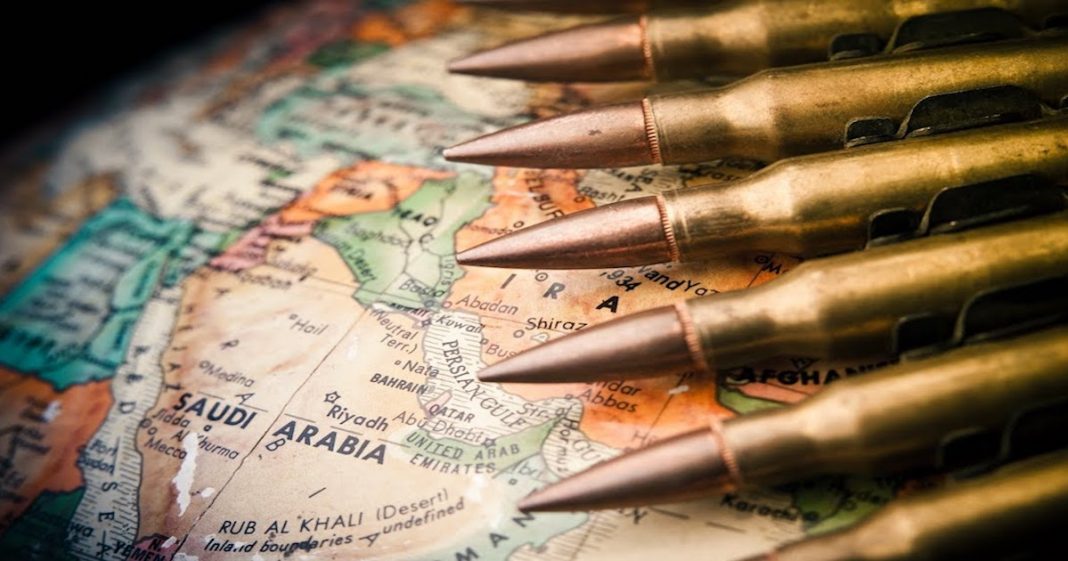 The conflict between Saudi Arabia and Iran is nothing more than a proxy war between Russia and NATO forces. Ring of Fire’s Josh Gay breaks it down:

(Transcript of Above Video):

Just the other day, we shot down a Syrian plane, a Russian-backed Syrian plane. We also shot down an Iranian drone. And there were reports that we put a missile launcher in Syria, nowhere close to ISIS troops, that are right near Iranian-backed Syrian forces. It looks like we’re trying to pick a fight with Iran and your government doesn’t want you to know about it. But why would we want to pick a fight with Iran? I mean, President Obama, right before he left office, opened up talks with Iran. But you know what? Go look online. The corporate media hated it. Iran is a close ally with Russia, so they hate that too.

That’s all this is. It’s just an attempt to fight with Russia. We’re already blaming Russia for faking information that’s surrounding Qatar, the information that says they supported terrorist organizations. That led to a blockade from Saudi Arabia. Now, Iran still remains friendly to Qatar. That, of course, pisses off Saudi Arabia.

Of course, it’s no coincidence that we sold $110 billion in weapons to Saudi Arabia. Of course, to hedge our bets, we sent F-15s to Qatar. We are trying to start a new regional proxy war, supposedly over this tiny little country of Qatar. But if all of that wasn’t enough, Rex Tillerson, the Secretary of State, said that the new US policy towards Iran is for a peaceful transition of that government. In American terms, that typically means regime change or war. Whether it was when we went after Saddam in Iraq or it was NATO’s efforts in Libya or Yugoslavia, regime change always means war, no matter what we call it. Thousands will die as we try, once again, to force our ideals on sovereign nations in the Middle East. Saudi Arabia and Iran, they are a powder keg right now. They’re fighting over Qatar, they’re fighting over oil rigs, they’re fighting over territory and lines in the water. It’s a powder keg and we’re holding the match.

While all of you guys are worried about Michael Flynn’s dirty business deals, they probably happened and it’s a big problem, we are about to touch off an all-out war in the Middle East and all of it is just a proxy conflict with Russia. Yes, Russia is a problem. They interfered in our election but that wasn’t to help Trump. It was to disrupt anything American. It was to disrupt the American democracy. You know what? All this talk about Russia-gate surrounding Trump, all it does is piss him off more and make him want to prove that he’s not Putin’s puppet. What better way to do that than to support a war, half a world away, between two countries that we don’t give a crap about?

So, next time you read the news and you gloss over something that mentions Iran or Saudi Arabia, replace Iran was, I don’t know, Russia. Replace the word. Read the story that way. When you see Saudi Arabia, replace it with the US, because that’s what’s going on. Russia knows better. They know they could go to all-out war with us. We’re the same way. We’re both armed to the teeth with nukes. We cannot touch off a global conflict between the two world super powers. But you know what? We sure as hell will do battle on somebody else’s turf, especially if that turf is rich with crude oil.

So, Americans, pay attention. Iran and Saudi Arabia are about to touch off a global, global war, a huge war. Or as Matthew Gault of Reuters put it, “Right now, the Middle East looks a lot like Europe on the eve of World War I.”