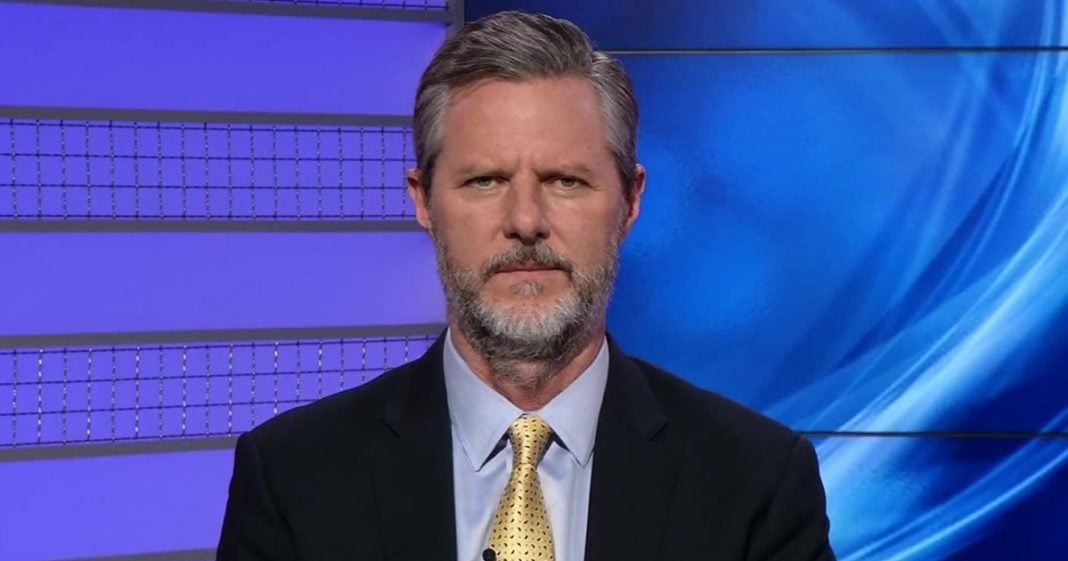 While paranoid right-wingers are wringing their hands over the prospect of Muslim “Sharia Law” being imposed on them, the Trump Administration appears to be doing its best to shove its Christian counterpart (known in medieval times as “Canon Law”) down our collective throats. First it was his selection of running mate, Mike Pence – a Puritanical science-denier who, in 2002, told Congress that “someday, scientists will come to see that only the theory of intelligent design [creationism] provides even a remotely rational explanation for the known universe.”

Then there’s Supreme Court justice Neil Gorsuch, a social conservative who consistently favors religious exemptions to civil rights laws. Then there was his choice of Betsy DeVos for Secretary of Education, who has stated that she wants to use educational reform to “advance God’s Kingdom.” Now, as if that wasn’t enough, Trump has selected the son of late televangelist Jerry Falwell to head his “education task force.”

Jerry Falwell Jr. inherited his position as president of the largest Christianist institution of higher learning on the planet, Liberty University. Among other things, he wants to eliminate federal Title IX regulations governing the investigation and reporting of sexual assault on college campuses. Though it is alarming to see Falwell being appointed to a political position, according to the Associated Press, the only reason he isn’t in DeVos’ position is because he didn’t want to move his family to Washington D.C.

Ironically, Trump is the very antithesis of Christian values – but that hasn’t stopped him from kissing up to the evangelical Christian Right, which embraces him wholeheartedly for numerous bizarre reasons. Ultimately, this is what his choices of people like DeVos and Falwell are all about. He is repaying a debt to the one voting demographic who were largely responsible for his victory last November.

Of course, conservative evangelical Christians have barely a nodding acquaintance with the real teachings of the Rabbi of Nazareth, who preached love for all, tolerance, and compassion and generosity toward the least of us. As British comedian and actor John Cleese has accurately pointed out, to these so-called “Christians,” it’s about sex and little else.

Considering that Trump is a serial adulterer, has supported abortion and LGBT rights in the past, and owns a chain of gambling casinos, this makes that support all the more mystifying. That is, until you consider that the evangelicals are looking for the End Times – and many believe Trump will “immantize the eschaton.” For those unfamiliar with the term, it refers to (among other things) the idea of establishing the “kingdom of God” on earth – which, by her own words, is Betty DeVos’ mission.

For more on that topic, check out this recent story.

Now, it’s payback time. Trump’s choice to appoint theocratic pseudo-Christian Talibaners like Pence, DeVos, and Falwell are part of that payback. Chances are, they won’t be the last such appointments.