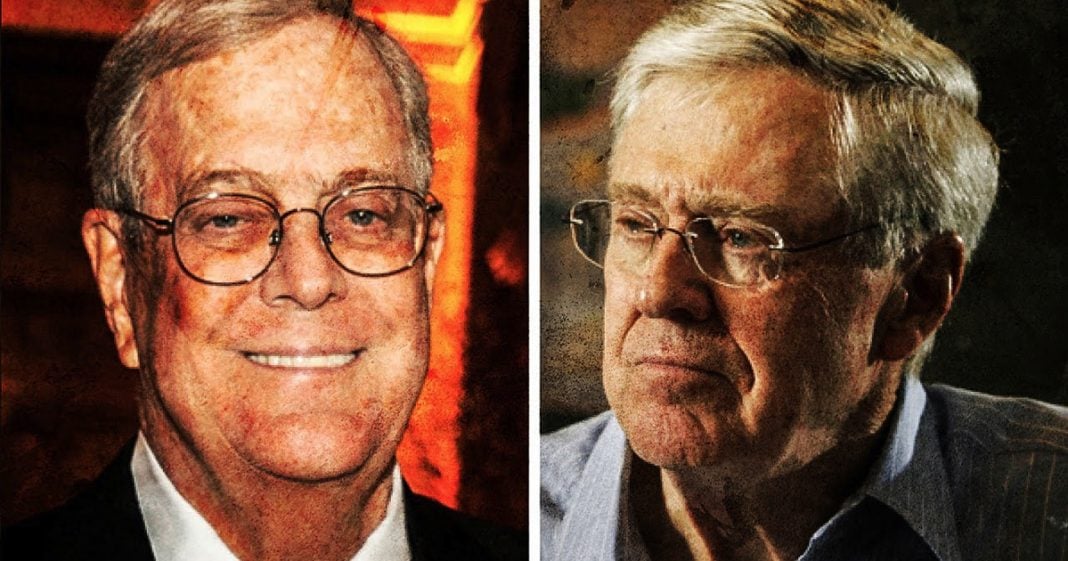 At a Koch Brothers retreat this weekend, wealthy Republican donors – including the Kochs themselves – warned the politicians in attendance that if they do not pass tax reform and the Obamacare repeal, they can kiss their campaign money goodbye. That is the textbook definition of extortion, but don’t expect the wealthy elite to ever go to prison for it. Ring of Fire’s Farron Cousins discusses this.

This past weekend, the Koch brothers hosted a donor retreat where at least 18 elected officials also attended, where they met with wealthy Republican donors, talked policy, and basically just mingled and had a great time with one another. During this meeting, both the Koch brothers and several other wealthy donors issued a warning to Republicans in the United States, “If you do not pass healthcare reform and if you do not pass tax reform, we are going to close the piggy banks.” Specifically, one wealthy Republican donor from Dallas said that his Dallas piggy bank is now closed until those two initiatives, those two pieces of legislation actually get passed.

Now I have no sympathy for members of the Republican Party whatsoever, not even the least little bit, but they are currently being held hostage by these wealthy donors. They know that they have to go back to D.C. and pass healthcare reform only because it cuts taxes on the wealthy. They have to pass their so-called tax reform because it cuts taxes for the top one percent, and that’s what these wealthy donors want. That is what they’ve been trying to get done for years but couldn’t get it through Obama, and now the Republicans control everything. They’re calling in the chips. They’re saying, “It’s time for you to deliver for us because we have consistently delivered for you.”

That’s what big money does to American politics. These Republicans and even those who weren’t in attendance, people like Paul Ryan, who is completely beholden to the Koch brothers, they owe them everything and they will deliver on everything that they can for these wealthy donors. Those are the only people that they care about. They do not care about their constituents. They do not care about the environment, policy, healthcare, Medicaid, anything other than cutting taxes for their wealthy donors because they know, and Republican donors proved it, confirmed it this weekend, that if they don’t do that, if they don’t give these billionaires more money, then their campaign funds are going to dry up.

Now a skilled lawyer could come in here, see what these people said at these meetings, and absolutely move forward with extortion charges. Unfortunately, our US Supreme Court says that political money is free speech, so it would be a little difficult to actually get charges against these people for this. But make no mistake, if this were any other situation, not politics, the men at that meeting would absolutely be charged with extortion.