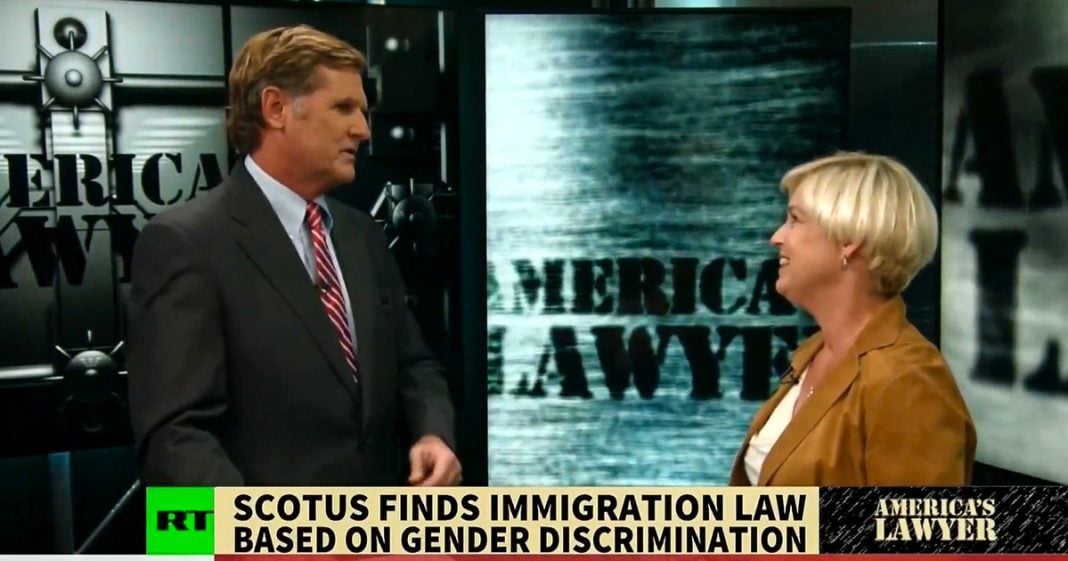 Via America’s Lawyer: Mike Papantonio is joined by Mollye Barrows, Legal Journalist with the Trial Lawyer Magazine to talk about a Supreme Court decision on gender discrimination in immigration cases.

Mike: The US Supreme Court has struck down a law that unequally favored children born abroad to unmarried women over unmarried men. In a nutshell, a law enacted in the 1950s made it easier for children born to unwed mothers to achieve citizenship, then it did children with a single father. In the majority decision, Justice Ruth Ginsburg wrote, ‘”The gender line, Congress drew is incompatible with the requirement that the government accord to all persons, the equal protection of the laws.” Effectively saying this law is unconstitutional for, more on this. I’m joined now by Mollye Barrows, legal journalist with the Trial Lawyer Magazine. Mollye, first of all, what was the law that created this gender disparity to begin with? Where did this all start?

Mollye: The Immigration and Nationality Act of 1952, so going back several decades, there was this notion that children born to parents out of wedlock whereas the dad may have been a citizen or the mom is citizen, they had unequal requirements for how the child born in that union, how the child could become a citizen. For example, unwed fathers had to spend at least, that were US citizens, unwed US citizen fathers had to spend at least five years in the United States in order for the child to become a citizen, whereas the requirement was only one year for the mothers and basically the reason for that is that the Supreme Court back in the day thought that unwed fathers were less likely to care for their children than the mothers.

Mike: Obviously, this lack of being able to evolve, but what were the circumstances that caused the Supreme Court to eventually look at this and finally take action to strike it out?

Mollye: Yes, so finally this, a recent case at immigration where the United States was trying to deport a repeated felon, a repeated convicted felon, and his name is Luis Ramon Morales-Santana, so he’s from the Dominican Republic. His mother was a Dominican Republic citizen. His father a US citizen, but he didn’t automatically meet the requirements to become a US citizen because his dad just missed the window of years that he was supposed to have spent in the United States in order for this child to become a citizen. Well, the parents later married. They moved to the United States. Luis gets arrested for a number of things, convicted felon and the United States government wants to deport him back to the Dominican Republic and he says, ‘But wait, I am a citizen. I want to become a citizen. It’s this law that’s unfairly kept me from becoming a citizen based on sexual discrimination.’ So that’s the case that went to the Supreme Court. That’s what they heard and they basically decided that we agree with you. This is sexual discrimination.

You’re not getting equal protection under the law, but it didn’t really work out in his favor as far as, while they may have agreed with him that it was sexual discrimination as we’ll explain in a second, it really didn’t work out as far as his bid for citizenship.

Mike: Did this really, what does this mean for people like Morales and other people in similar situations?

Mollye: Well, I think ultimately, he was certainly hoping that they would come back and say, ‘Yeah, you’re right. Not only was it sexual discrimination, you’re not getting legal protection under the law, but we’re going to go ahead and let you become a citizen. We’re going to take a whole new look at this.’ But that’s not what happened. They pitched it back in the Congress’ lap and said, ‘Congress, you need to come up with a rule that’s equitable. That applies to all people in these situations, but in the meantime, we’re going to make it fair and that now, children born to unwed mothers have to meet the same requirements as those born to unwed fathers.’ So he’s not going to be a citizen.

Mike: Yeah, people watching this have to conclude the same thing that you and I.

Mike: These aren’t great years for people like Morales because of the Trump years to begin with so.

Mike: This is an important ruling for certainly from an equal protection standpoint. I don’t know that it really is a step forward for huge, swaths of immigrants that want to come to the United States and still have equal protection under the law, but it’s a start.