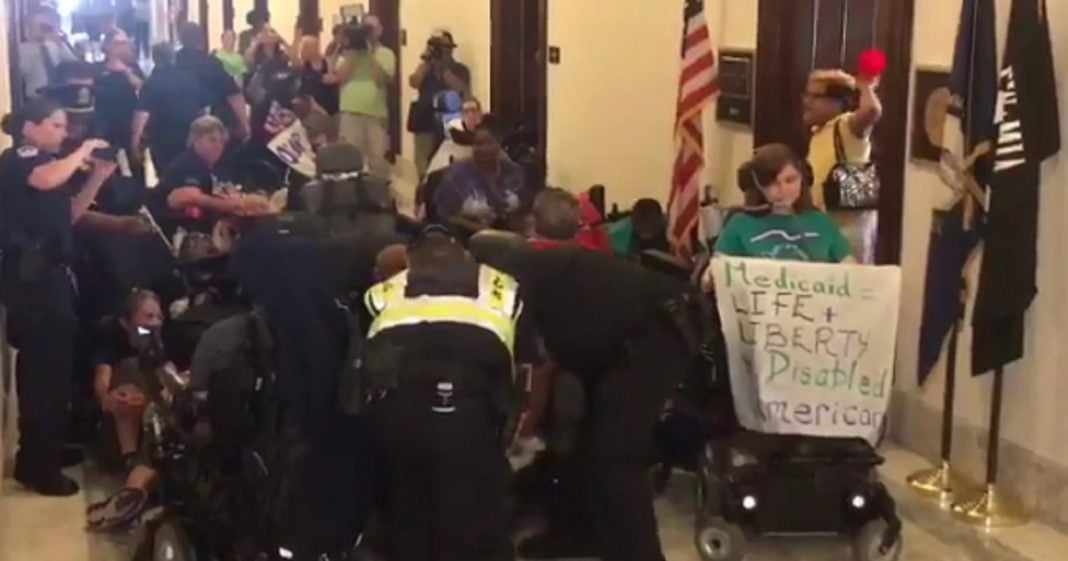 On Thursday, just as the Senate finally released their latest version of the AHCA, a group of disabled Americans staged a “die-in” outside of the office of Senate Majority Leader Mitch McConnell.

The group’s aim was to demand transparency and fairness as Republicans continue to produce major legislation that will affect 60 percent of the economy and will guarantee the fate of Americans with pre-existing conditions nationwide.

The protest was organized by the National ADAPT organization, a national grassroots disability rights organization “fighting to end the institutional bias.”

Let this sink in: People with disabilities are BEGGING their government for their lives. This is the United States of America. Shameful. https://t.co/Lsjyr88n9y

As the protest gathered, Capitol police began to assemble, taking some of the more non-compliant protesters out of the area by force. Because many of those in attendance were in wheelchairs, the image of these individuals being removed by police was striking.

“No cuts to Medicaid, save our liberty.” Group chants in front of @SenateMajLdr‘s office. pic.twitter.com/fVJpufMDgC

Many of those removed, even those clearly incapable of causing any harm, were arrested, taken away in a wheelchair-accessible paddy wagon. Others had to be removed via paramedic.

At one point, it appeared that Capitol police made a serious error in their removal of the protesters and dropped one of the wheelchair-bound individuals.

The new version of the AHCA rolled out today cuts Medicaid even more than the passed House version had, despite earlier promises from President Trump to keep those social safety nets intact.

This is the tragic state of American politics and health – people so desperate to preserve their healthcare that they are willing to be degraded and dragged from the Capitol in order to make a point.