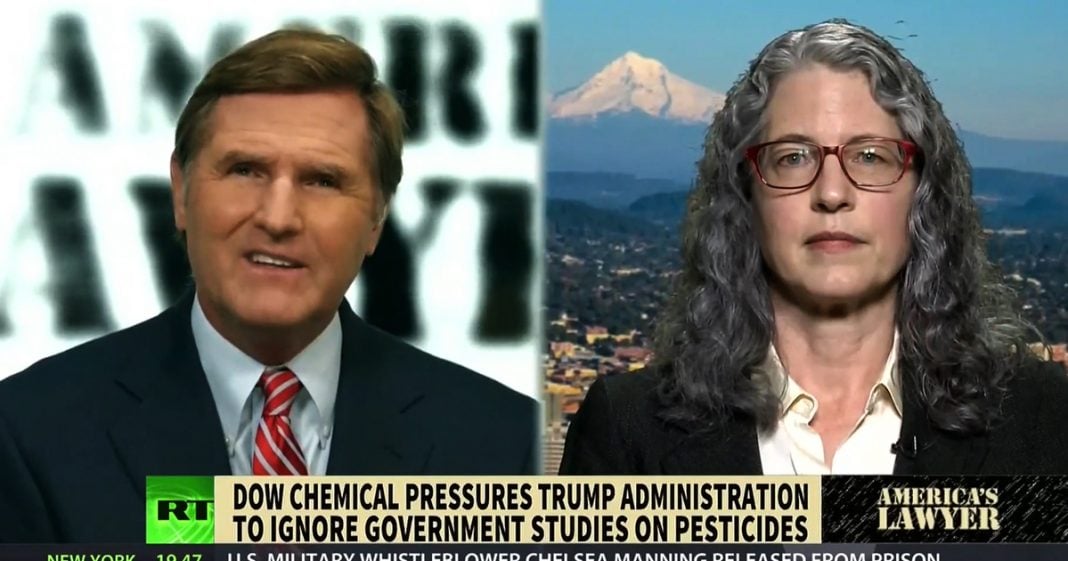 Via America’s Lawyer: Mike Papantonio talks to Stephanie Parent, Senior Attorney at the Center for Biological Diversity about how Dow Chemical is putting pressure on the Trump Administration to ignore government studies on the dangers of certain pesticides.

Papantonio: Last month, attorneys for the chemical giant Dow sent letters to the heads of three government agencies. These letters requested that the Trump administration completely ignore the findings of government scientists concerning a group of pesticides found to be harmful to nearly 1800 critically threatened or endangered species. This request came just weeks after the EPA administrator Scott Pruitt announced that he’d reversed regulation on one of the pesticides called chlorpyrifos. It’s actually put on food, and he made the request that we do away with that regulation despite an agency study showing it could hurt the development of children’s brains.

Here to discuss these developments is Stephanie Parent, a senior attorney at the Center for Biological Diversity. Let me ask you, can you start please by outlining what the government’s own studies tell us about the harm of these pesticides, how they pose a serious threat to endangered species and to humans? Talk about that a little bit.

Stephanie: Sure, Mike. Pesticides are poisons. They’re designed to kill, so it comes as no surprise that the government scientists found that when these are used, they are likely to cause harm to vulnerable wildlife, and in some cases to children. These three pesticides are insecticides, and they’re very highly toxic not only to insects, including endangered butterflies, but also to fish and aquatic invertebrates. The EPA studies, called biological evaluations, determined that when these pesticides are used where this vulnerable wildlife and plants are found, they’re likely to be harmed.

Papantonio: Even beyond endangered species, as I mentioned, this request came just weeks after Scott Pruitt reversed a rule that would have barred the use of something that was used on food that can cause harm to the development of children’s brains. I mean, I don’t know how you get anything clearer than that. The government knows exactly what they’re asking this agency to do. Chances are, the EPA is going to go along with it because it’s almost as if it’s demanded that they do that. What’s your take on this? Am I reading too much into this?

Stephanie: No, Mike, you’re not. That decision by Scott Pruitt concerns chlorpyrifos, and that decision has already been made. In that case, it’s really shocking to the conscience and it’s irresponsible that Scott Pruitt is endangering the health and the well-being of children. The reason is that there is substantial independent research, and two recent EPA scientific assessments, that show chlorpyrifos causes damage to children’s brains, and it’s irreversible damage.

Now, there’s a reason that we banned the use of chlorpyrifos indoors over a decade ago. This is already found in our drinking water, and we need to not use it on our food. It’s not safe.

Papantonio: Okay, the point is this: if you really analyze what’s happening here, is the only way to actually fight back … The government obviously is not going to fight back. We’re seeing that firsthand. The Trump administration doesn’t appear to be willing to fight back; in fact, they’re part of the problem. The media, basically, if you can even find a story where they tell how serious this stuff is, they gloss over the truth. It seems like the only way that you can do anything about this type of conduct is lawsuits. What is your take on it? What else can we do, if we can’t count on anybody else to do their job?

Stephanie: Even to get these studies done, it took multiple lawsuits to get the EPA to do these studies on the wildlife. The ban on chlorpyrifos has been in litigation for a decade. The court finally lost its patience and ordered EPA to make the findings, and the EPA scientists proposed that we needed to ban the use of chlorpyrifos from our food. It’s on our strawberries and it’s on our almonds. It’s those scientific studies that Scott Pruitt has now decided to disregard, and has pulled back and said that no decision will be made on banning chlorpyrifos probably until the year 2022.

Now, the attorneys in that case have already brought another action asking the court to order the EPA to do the right thing, which is based on their scientific evidence.

Papantonio: Okay, but really, isn’t it your experience, because it is certainly mine, that the only thing that really stops the corporation from doing what the corporation should do responsibly is to hit them with a money award where the stockholders, the shareholders say, ‘Gee whiz, if we get hit like this many more times, the company could go under because of this one product?’ What’s been your experience, and what is your take on that? As I analyze what’s happening with the Trump administration and the way they’re tampering with agencies, I don’t know what any other alternative is. What is your take?

Stephanie: There are some lawsuits going on, personal injury lawsuits, concerning other chemicals. This one is glyphosate, because it causes non-Hodgkin’s lymphoma. That case is well under way, and we’re learning a lot through discovery about what a cozy relationship the chemical companies have with this administration and with the EPA. Those are well under way, and as you know, those will take some time. Yeah, we do need to hit them where the pocketbook is, and in the case of endangered species and the regulation of these other pesticides, we’re doing what we can to ensure that they are held accountable and that eventually they need to heed to what the science is showing.

Papantonio: Aren’t you seeing firsthand, though, this cozy relationship between … Not just the Trump administration. We saw it with the Obama administration, we’ve seen it with Clinton, we’ve seen it all the way back, this love affair that takes place between the White House, the regulators, and industry, where we actually see the industry saying, ‘Gee whiz, we will hire the regulators, we’ll pay them more money, we’ll let them know that ahead of time so they’ll do what we want them to do.’ We see it constantly. We see it with the SEC, we see it in the EPA, we see it with the FDA. What’s been your experience and what’s your take on that problem where we really don’t have government oversight, because all of these people want to end up going to work for the Dows and the DuPonts and the Pfizers? Isn’t that a huge problem that we’re faced with, where regulators, they’re not really regulating because they’re looking for the big payday?

Stephanie: There’s definitely a revolving door going on between the EPA pesticide program and the chemical industry. There’s plenty of evidence of that. With respect to Dow, who’s asking Scott Pruitt to ignore the science in the case of these three pesticides and vulnerable wildlife, it’s been widely reported that Dow gave a million dollars to the presidential inauguration. Dow spends millions of dollars every year lobbying Congress, and they’re getting their money’s worth. The fact is that the CEO of Dow was sitting right next to President Trump, and was handed the pen that the president had just used to sign an executive order that is aimed at eliminating regulations.

Now, there’s a real false narrative about regulations and what they do, but the fact is that regulations are what we have to avoid harm to vulnerable people, children, and vulnerable wildlife on the brink of extinction. It’s what levels the playing field, and it addresses or balances the health and economic interests.