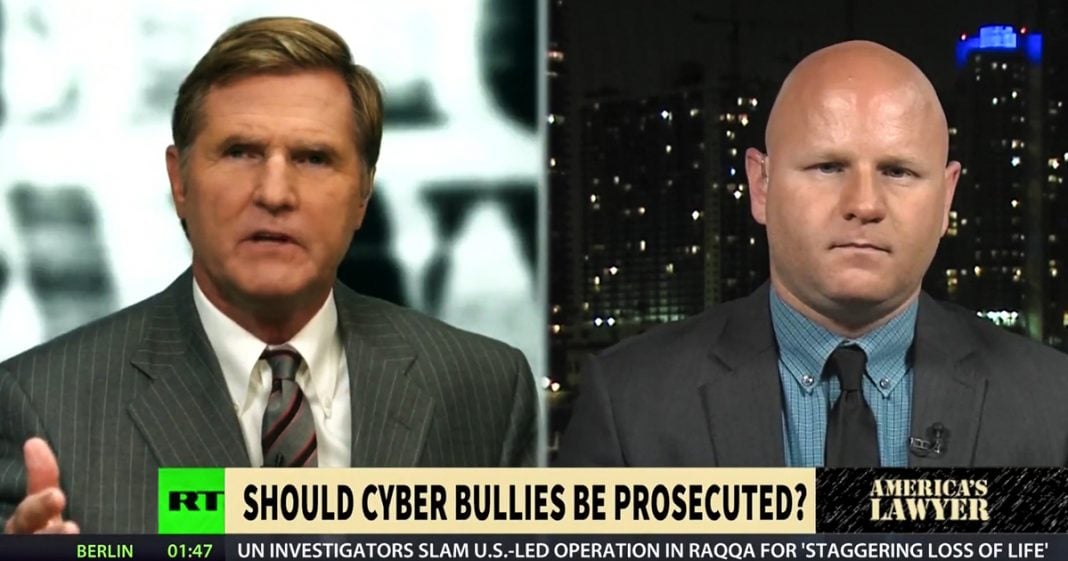 Papantonio: Law makers in the state of Utah have approved a new law that’s meant to crack down on the increasing problem of cyberbullying. The new regulation gives prosecutors the ability to send online bullies to jail for up to one year, and makes it a crime to post personal information about a person online that’s meant to intimidate, or abuse, or threaten, or harass, or frighten, or even disrupt the electronic communications of another person. Critics of the law say it’s too broad and could penalize people for their First Amendment rights. But supporters say this is the only way to crack down on targeted online threats.

Here to talk about this issue is Farron Cousins, executive director of the Trial Lawyer Magazine. Farron, start by telling us how bad this issue of cyberbullying really is becoming in the United States.

We know that 20% of high school aged children have freely admitted that they have joined in to cyberbullying when they’ve seen someone attacking someone else online. They jump in and do that. We have, I think, about 85% of children under the age of 17 have a social media account, in many instances that their parents set up for them. So they have plenty of access to the entire world. They’ve got access to people, and they use this online cloak of anonymity, or even if they know who they are, they can use it as a way, ‘I can say things behind your back online, that I couldn’t say directly to your face.’ It gives this level of confidence that in the past they didn’t have. They can say whatever they want to without having to see somebody, and see that reaction.

We do know, according to health statistics, people who are cyber bullied, adults, teens, and children alike, report feeling depressed, feeling sad, feeling angry. Ultimately, they feel like their entire self-worth, their self-confidence has completely disappeared because of this cyberbullying.

Papantonio: Okay. Can you explain what this law in Utah … What are they attempting to do here? It’s obvious to me, you have to stop it. I totally agree. You either have to put some parents responsible for this, where the parents have got to pay some money damages. They’ve got a kid that’s got a screw loose, and he thinks this is fun, driving someone to suicide. Well, maybe that parent needs to be pulled into this case, since they’re supervisory of that, since the computer’s probably in their home. There’s a lot of things that can be done here. But what are they trying to do in Utah?

Farron: Basically what they want to do in Utah, is make sure that any kind of cyberbullying that would specifically identify someone, or where that person lives, make that a criminal activity. It is a very narrow focus, but they’ve learned from mistakes that we’ve seen in states like New York, and North Carolina, where their cyberbullying laws were struck down by the courts, because they said they were too broad. Basically, what you’re trying to do would have this chilling effect on the First Amendment, and would lead to … They always like to go to the scare tactics. They always tell us, ‘Well, gee, if you say something negative about the color of their house. Or if you say something negative about a politician, they can turn around and prosecute you for that. You don’t want that do you?’ And that’s how they sell it to the public, saying, ‘Look, this is a huge violation of your First Amendment rights.’ When in reality, it’s trying to save people’s lives.

We have students, teenagers and children across this country, who have committed suicide due to cyberbullying, and a disgusting trend that’s happening is after they commit suicide, on their Facebook memorial pages they are still being bullied by the same students who didn’t learn a thing from it.

So, I’m not totally sold on this being a problem. I think this is something that has to make it to the United States Supreme Court. What do you think?

Farron: Oh, absolutely. We do have other countries, our neighbors up in Canada, the United Kingdom, they have very strict cyberbullying laws. Because they don’t necessarily have this kindergarten written First Amendment that says you can’t restrict anything. We have to understand … Look, when this Bill of Rights was written, yes, it was written for a purpose, it still serves a purpose today. But we have to understand how much things have changed in the centuries since this was written, and we do have to adapt. We’re not trying to infringe on somebody’s First Amendment freedoms, we’re trying to save people’s lives from these people who see nothing wrong with pushing a person to suicide, and having absolutely no accountability when they do it.

Papantonio: Here’s the way you see it. Accountability has to do with this. Misdemeanor. If a child, a teenager, one of these freak teenagers walks into a store and steals a candy bar, there’s a misdemeanor charge. There’s going to be problems attached to that. But here, the other part is … And I think this is what is going to develop. Lawyers are going to start suing the entire family. They’re going to sue this child … It doesn’t make any difference whether he’s a child. If he’s a 16 year old kid, get a judgment against him, that he has to deal with for the rest of his or her life. That’s the new trend I think we’re going to see happening here, Farron. Because otherwise, nothing ever happens. You have these little … You’ve got these kids that are maladjusted, the parents not overseeing what they’re doing, they don’t teach their children very well that this isn’t something they should do.

So, A, go after them for misdemeanors, possibly even felonies. Second of all, money judgments that follow the family around. Follow the child around, and possibly even the parents around for the rest of that child’s life. That’s the only way I see out of this.

Farron, thank you for joining me, okay.