In an extraordinary exchange with Vox reporters on Thursday, Senator John McCain seemed intent on ignoring any real elements of the AHCA in order to focus on the one thing that seems to matter to the GOB: getting the votes.

During the bizarre interview, reporter Tara Golshan repeatedly asked McCain to speak about the aspects of the American Health Care Act that he thought was concerning, or at least might offer resistance to the passage of the bill.

Despite having several specific questions directed at him, McCain again and again elected to talk about the complicated effort of winning the votes necessary to pass the legislation, rather than discussing what was contained in the bill. 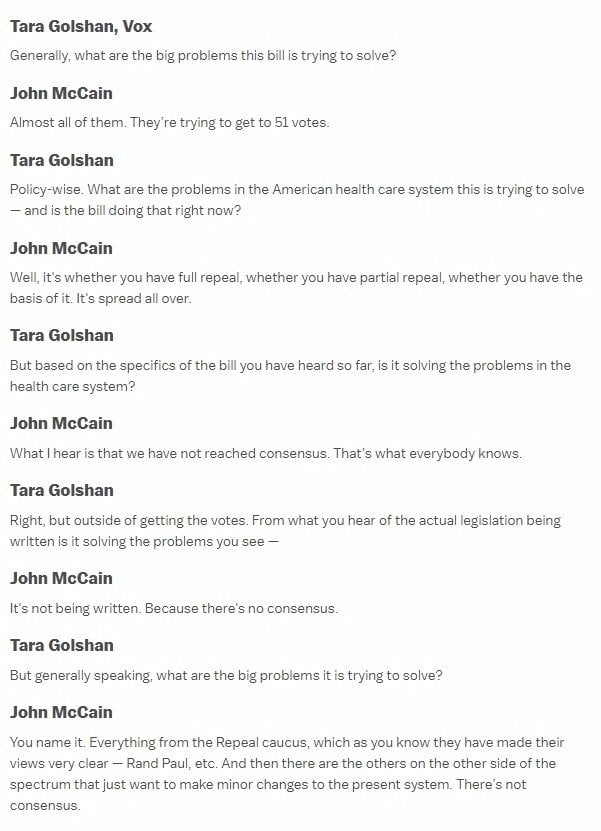 It appears that McCain was trying his level best to pretend that the bill Republicans are desperate to pass will actually affect real people. Like many others in the party, McCain is certainly aware of the flaws of the legislation – and they are numerous – but is choosing to look past them, putting party over country.

McCain’s behavior echoes that of Senator Orrin Hatch who, earlier this week, noted that he didn’t care if the public ever got a chance to see the bill before its passage, as long as it passed.

These officials who were elected to represent the people are engaging in the most malignant form of Democracy-undermining imaginable. They clearly do not care what is best for the nation, or for its people – they only care that they can put a win in the President’s pocket and give the middle finger to the poor.

Sure, 24 million will lose their healthcare coverage, but at least the Republicans will have passed their legislation! Hoorah!