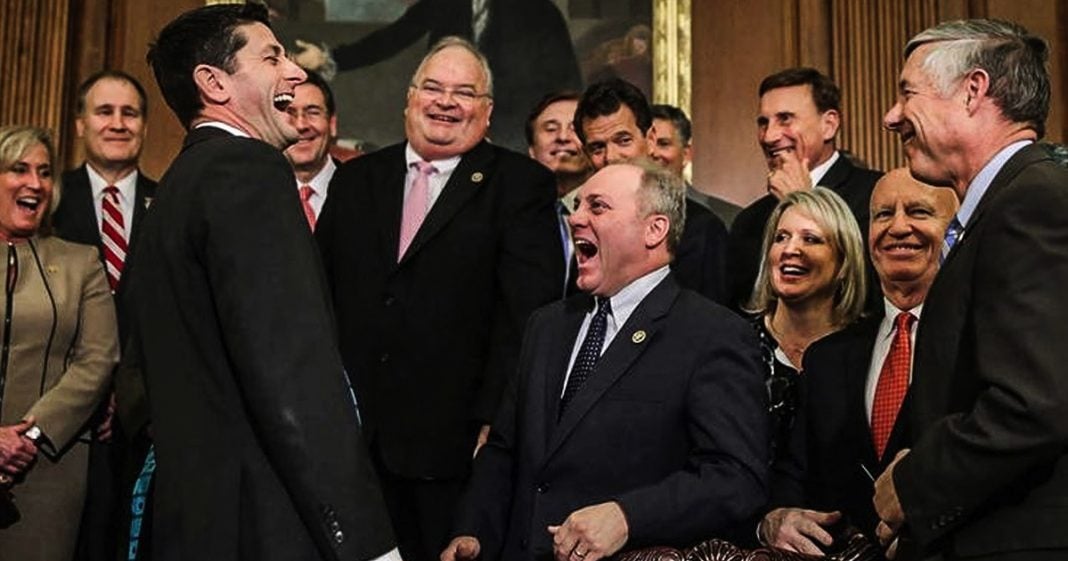 In the months since the Trump Administration took over, corruption has risen to levels not seen since the 1920s. Furthermore, they aren’t even attempting to hide it anymore.

Although it is not the first time the GOP-controlled Congress has attempted to shove bills through in the dead of night, the recent drive to pass the latest “Trumpcare” scheme through the Senate lends a whole new definition to the word “egregious.” Opportunities to read the bill and comment have been denied not only to the constituents these people are supposed to represent, but to Congressional Democrats as well.

The bill has been drafted in secret, and two GOP senior Senate aides told Axios that the Republicans “have no plans to publicly release it.”  One of those aides went so far as to say, “We aren’t stupid.”

Of course, this is only one manifestation of a GOP majority out of control. This week, while the country was focused on the “Russiagate” hearings, the House of Representatives passed a bill along party lines effectively gutting Dodd-Frank – the only regulations that might had prevented a replay of the financial meltdown of 2008.

Also this week, the U.S. Senate Radio & Television Correspondents Gallery issued new rules that make it nearly impossible for members of the press to interview Senators – or even have access at all.

That’s not all. Remember that in February, over 200 cowardly and craven Congressional Republicans refused to meet with constituents in the face of massive opposition to ACA repeal and concerns Trump’s ill-advised immigration policies and travel bans.

Since the GOP has gained control over two branches of government (and, with the installation of Neil Gorsuch, effective control of the judiciary as well), it has become abundantly clear that the Republicans have abdicated their Constitutional responsibility to represent the citizens of the United States. They represent nothing except their own interests and those of the corporations and the billionaire oligarchs who finance them (and now, have purchased the Executive Branch).

Of course, none of this is news to regular followers of The Ring of Fire. It is still worth understanding what this portends, however – and the dangerous precedent set by such secrecy and obfuscation and dismissal of citizens’ concerns and needs in favor of the wants and demands of a corporate oligarchy. What we are seeing with this Administration bears the hallmarks of fascism, which include control and suppression of the media and protection of corporate power.

There have been other signs, of course; rising nationalism in the form of hate groups and white supremacists, tacitly approved by Trump, as well as the ongoing disdain for human rights as police run roughshod over people of color. There was the creation of scapegoats and “enemies of the state” and obsession with national security in the form of travel bans, the intimate relationship between religion and government represented by people like Mike Pence and Betsy DeVos, Jeff Sessions’ obsession with crime and punishment (especially the latter, at least for low-level offenders and people of color) and of course, the rampant cronyism and corruption that define the Trump Administration.

Although many have pointed out the frightening similarities between present-day America and Germany during the 1930s, there are a few differences that give us reason for hope. One of those differences, which Thom Hartmann has pointed out on occasion, is that America has had well over two centuries of experience with representative democracy, whereas Germans of that time had very little. American democracy may be on life support, but there are still those – even in the GOP – who see what is happening and are willing to stand up against it.

The relative decentralized nature of American government may also save us as states and local communities stand up to the Trump and GOP agenda. In these days of creeping fascism, it’s good to remember the old saying: “All politics is local.”

There is another saying that is also worth remembering these days: “Sunshine is the best disinfectant.” The very fact that the GOP is doing its level best to hide its agenda clearly indicates their full awareness that it will meet vehement opposition – and that means it must be exposed to the light of day by any means possible.