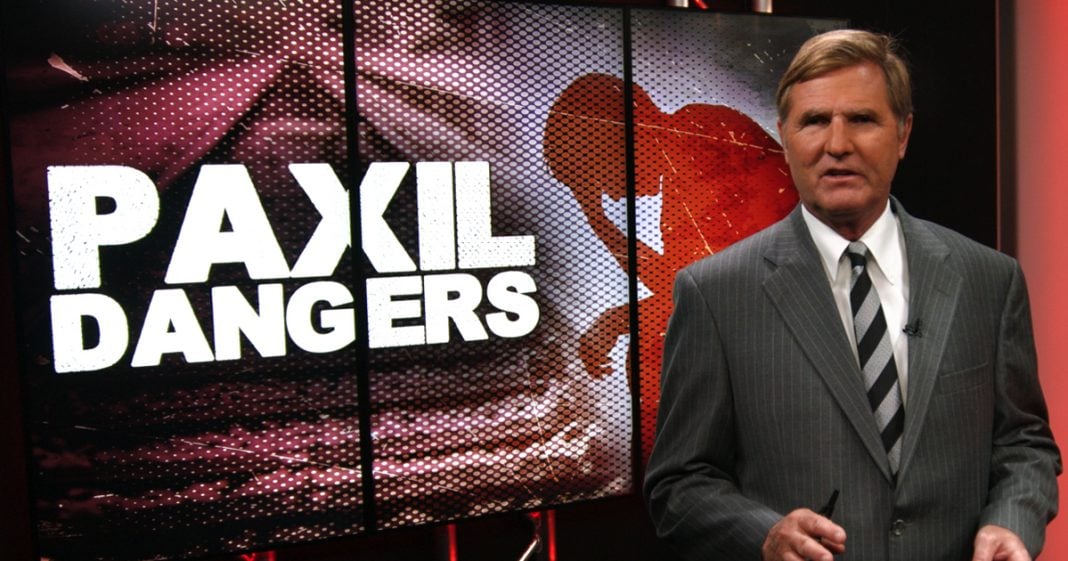 America’s Lawyer Mike Papantonio talks about how anti-depressants like Paxil have been marketed to consumers, and why many of these drugs are far more harmful than their labels would have you believe.

According to the National Institute of Mental Health, in 2015 an estimated 16 million American’s experienced at least one major depressive episode. That’s more than 7% of the population over the age of 18. But Big Pharma doesn’t see that number as 15 million people who are suffering, they look at it as 15 million people they can sell pills to every single day. There are dozens of different anti-depressants on the market today, with each drug company trying to capture as many of those 15 million patients as possible. And while anti-depressants have shown promise in treating depression sometimes, many of them now carry warnings of an increased risk of suicide and they should.

That’s what happened to Stewart Dolin, a Chicago attorney who committed suicide by jumping in front of a train after taking the generic version of the anti-depressant Paxil. Mr. Dolin had only been taking this medication for 5 days, 5 days, when he committed suicide. GlaxoSmithKline, the maker of Paxil, had known for years that their medication increased the risk of suicide in patients, and for the longest time they attempted to cover up the dangers to keep their profits flowing.

Paroxetine, one of the active ingredients in Paxil, had been studied by GSK since 1989 when they first developed the medication and submitted their application to the FDA. According to some of the earliest studies produced by GSK, Paxil actually showed a decrease in suicidal thoughts and actions compared to placebo groups – or at least, that’s the way the company presented it, but it was a lie. As it turns out, GSK was actually manipulating their own data to show an increased risk of suicide and suicide attempts among placebos that didn’t exist at all. It was all fabricated. It was all phonied up. And again, GSK did this to convince the FDA that it’s anti-depressant was completely safe.

An internal email from the company from 1999 showed that the studies had been manipulated to count placebo suicide attempts that should never have been counted at all. Again, they were phonying up the data. The internal email also laid out the many ways that GSK was twisting the data for the FDA approval.

For example, in 2004, the FDA ordered GSK to include a black box warning for their drug showing an increased risk of suicide in young users, but it didn’t specifically mention patients over the age of 24 and GSK knew that was a problem. In April of 2006, nearly 7 years after GSK’s own internal documents showed that the company knew it was misrepresenting, making up findings, GSK finally decided to “re-analyze” it’s data and found that yes, absolutely, Paxil does in fact cause a statistically significant increase in suicidal thoughts and actions in adults with Major Depressive Disorder. And yet, the product label was still not updated to reflect this fact that GSK was absolutely aware of.

That brings us back to the case of Stewart Dolin. Had Glaxo properly warned doctors and patients, and even the FDA, about the dangers they understood 20 years ago, Mr. Dolin and all the people that have died from this product, might still be alive today.