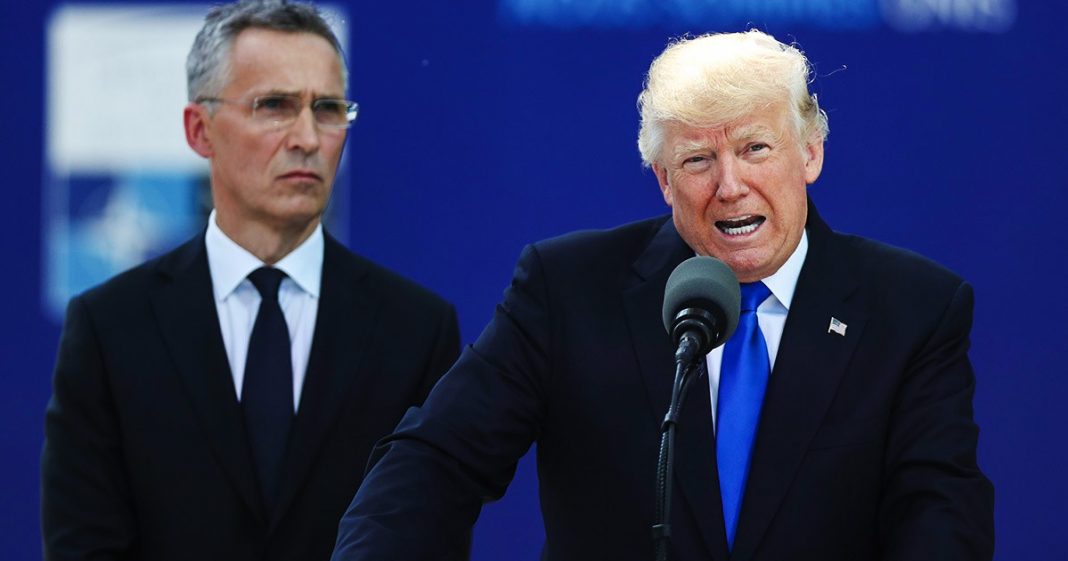 Ring of Fire’s Sam Seder is joined by Heather ‘Digby’ Parton to talk about President Trump’s latest trip to Europe and his latest barrage of tweets and why his closest advisors feel like Trump isn’t listening to them anymore.

Sam: Digby, in the last hour, you were making a point about, and you had written about this I think this week as well in Salon, that H. R. McMaster, the National Security Chief, Rex Tillerson, Secretary of State, Mattis, the Secretary of Defense, all three were personally assuring newspapers and allies and had sat down with President Trump. They all believe that President Trump and his European speech would make a nod to Article 5, which is the central sort of organizing principle of NATO, which is you attack any of us, we’re all going to attack you. That type of thing. We’re here to back each other up. They were all blindsided when this was not in the speech.

You’ve seen Mattis go out there and make all sorts of excuses. I think he quoted Winston Churchill by saying, ‘The American people will make all the wrong choices until they make the right one” or something to that effect. Basically saying don’t worry. Don’t believe our president. We’ll be fine.

There was also something that struck me. First off, in this era in particular, but I think I’ve always had this perspective, but it’s even more so now, when you read stuff in the paper or it’s reported, particularly coming out of this White House, there is an agenda associated with it. The fact that we know this a week later suggests to me that one of those three guys or all three of those guys, their team put this out there. They may have done it to assure our allies in some fashion, though I’m not sure that’s very reassuring, frankly. It sounds like a piece that you put out if you want to say, ‘Hey, I just want to get this on record. I’ve been dissed.’

This coupled with a piece in Salon earlier in the week, or maybe it was The Daily Beast, about H. R. McMaster, his friends in the military saying, ‘We feel like he’s being abused.’ I think you mentioned Thomas Ricks had a piece like this. That, to me, sounds like at least one person who is trying to set up a public case for why he has to leave the administration. A guy like McMaster, supposedly he’s there because he’s military, and he has a duty to his country, and some of these guys are supposedly in there to temper Donald Trump. It strikes me as, when you start to read these stories, they are, what do you call it? Hosing down the runway. Greasing the slide. Fueling up the getaway car. It sounds like they’re attempting to lay the rationale for their exit from the White House.

Digby: I agree with you. The Ricks piece, I wrote about that, too, a week or so ago because it actually struck me that … Ricks, he writes for Foreign Policy, and he’s very enmeshed in the military-

Digby: And the national security establishment. He’s a good guy as far as I know. He’s not like some tool or anything. He’s a real reporter. But his deal was, is that he had thought it was important that good people joined the Trump administration in the beginning because it was necessary for the good of the country to have people there who knew what they were doing and would be able to, as you say, temper Trump and give him good advice. You couldn’t just refuse to serve your country in a situation like this. Maybe it was more important than ever that good people go in there.

He’s changed his mind because he agrees that McMaster is being abused, and that Mattis is being thwarted at every turn, and that these people who may have had good intensions, they’re not just partisan actors here, that they were trying to do their best for the country, that they’re being turned into enablers of Trump rather than actually influencing Trump. He feels that, actually, the country would be safer now if people like McMaster and others were not in the White House, that they should resign because by doing that, you just sort of leave Trump there, that he’s so inept and incompetent that he will do less harm without having these people around enabling him, people who actually give some credence to what he’s doing, whereas otherwise people won’t listen to them at all.

I found that just astonishing that people are actually thinking along these lines. It’s unbelievable.

Sam: That is stunning. I had a conversation earlier this week with sort of a Republican operative type who was saying there’s nobody … This report came out as well. Out of the 559 key positions that are supposed to be staffed, these are key positions in the functioning of the executive branch of the government, out of those 559, something like 450 there’s not even a nominee for. There’s not even an appointee. There’s not even a hint as to who those people might be. There are something like 1,200 positions that are supposed to be staffed by the … Like I say, 449 are key ones. But there’s no one there, and they could talk about obstruction all they want, but the Government Ethics agency, the Democrats, they can’t hold up nominees if there’s no nominee.

It really is stunning how, I guess, just the level of incompetence that is now … When you combine the Russian investigation, if that’s how you want to call that, omnibus intrigue around the Trump administration, between that, which is distracting Donald Trump significantly, and the failure to appoint all these people to these key positions, there is, I think, a lot less harm being done than could be if there was some measure of competence associated with this administration. So fortunately, on that regard, it’s not. But at the same time …

And I should add, too, I’m sorry, folks, there’s just so much news, that every major defense firm who is qualified to represent a president in regards to a Department of Justice or FBI investigation has basically said to Donald Trump, ‘Pass. We’re not going to take your case.’ Which is virtually unheard of.

Sam: So we have all this. It’s a massive distraction. The White House is more or less paralyzed it seems. That brings up two major problems, it strikes me, and I want to take a break and then we’ll talk about them. One is, regardless of the fact that the administration doesn’t know how to appoint people to these key positions, bad things happen. Natural disasters, manmade disasters happen. I don’t know how our government responds. But two, while all this intrigue and all this incompetence takes place at the White House, in the Senate, Mitch McConnell, who is very competent, sadly has been working on this House Obamacare replace and repeal bill. When we come back, we’ll talk about why it looks like, despite all the notions that they were never going to come together, they very well may.

We got to take a break. We’ll be right back after this. I’m Sam Seder. Ring of Fire Radio.