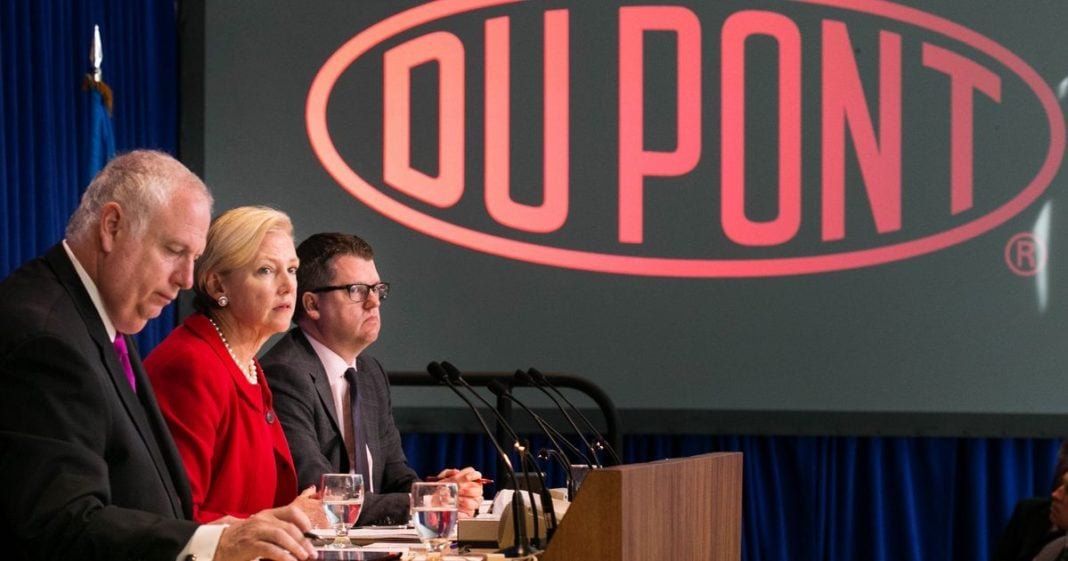 In 2009, DuPont began replacing the chemical PFOA – better known as C8 – with a new concoction known as “GenX” after the company was given the go-ahead by the Environmental Protection Agency. The new chemical, now used in the manufacture of non-stick cookware, is touted by DuPont’s corporate offspring Chemours as a “more sustainable solution” with a “favorable toxicological profile and very rapid bioelimination.” Of course, the few health studies on the effects of GenX appear to have been generated by the manufacturers – and we know what those are worth.

Larry Cahoon, who teaches biology at the University of North Carolina Wilmington, points out that GenX is an “emerging contaminant,” according to the EPA. This essentially means that it hasn’t been around long enough and so little is really known about it other than there are no protocols on which to base regulations of the substance. Cahoon considers this to be “really troubling,” pointing out that Chemours “is being allowed to conduct a really big experiment on all us 250,000 guinea pigs, without knowing whether it’ll hurt us.” Unfortunately, under EPA guidelines, such unregulated chemicals are considered “safe” until they have been proven to be toxic.

Mike Papantonio, one of the lead attorneys who helped reach a $670 million settlement with DuPont and Chemours on behalf of people injured by C8, says the evidence is beginning to show that GenX is likely to cause the exact same injuries as C8. He has just posted a comprehensive website on GenX for individuals to stay informed of recent developments and health concerns.

DuPont’s own lab tests have already shown that GenX is causing the same problems as the chemical it was designed to replace. One of those experiments involved lab rats who were fed GenX in varying amounts over a two-year period. The rats contracted cancer of the liver as well as tumors in the pancreas and testicles. Some of those rats also developed kidney disease and other liver and reproductive problems. Despite the evidence, DuPont’s senior research toxicologist said “these tumor findings are not considered relevant for human risk assessment.” Why? Because of the difference between rats and humans. The researchers concluded that the mechanism leading to the formation of cancer in rats “might” be different in humans.

This is exactly what DuPont’s biostitutes said about C8 in 2004.

As late baseball player Yogi Berra reportedly said, “It’s déjà vu all over again.” Dr. Alan Ducatman, a physician specializing in the study of the effects of toxic chemicals on health, described DuPont’s own review of the internally-generated data as “cherry picking.” He calls it a “partial argument that could be interesting only to those who are not strongly following the literature.” In other words, if some of the data doesn’t say what DuPont wants to hear, they’ll simply minimize it.

GenX has now made its way into the Cape Fear River, which provides drinking water to approximately 250,000 people. Furthermore, the Cape Fear Public Utility Authority reports that they are unable to remove the substance from the water.

It is becoming painfully obvious that DuPont has learned nothing from having to pay the recent $670.7 million settlement (a figure that could go up by another quarter-billion) to Ohio River Valley residents who were poisoned by C8.

Were DuPont a natural human offender, it would be considered a recidivist and by rights would be locked up for years. Unfortunately, as a “corporate person,” all that can be done under current law is to continue to hold them financially accountable – and considering that the combined assets of DuPont and Chemours amount to nearly $48 billion, fines and restitution of a paltry few hundred million is little more than the cost of doing business, and unlikely to change their corporate behavior.