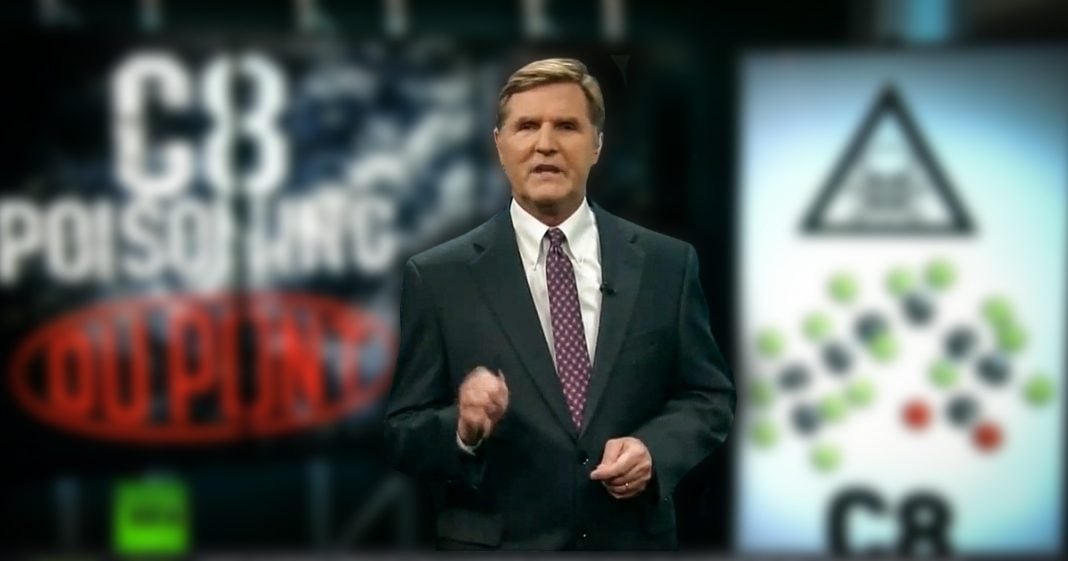 Via America’s Lawyer: C8 is a product that the DuPont corporation used to manufacture Teflon. In the process of manufacturing Teflon, DuPont pumped millions of pounds of C8 directly into the Ohio River, and that cancer-causing toxic ended up in the drinking water of more than 70,000 residents along the Ohio River, all along the valley. Mike Papantonio discussed this with attorney Gary Douglas on a recent episode of America’s Lawyer.

Learn more about the dangers of C8 here.

Papantonio: C8 is a product that the DuPont corporation used to manufacture Teflon. In the process of manufacturing Teflon, DuPont pumped millions of pounds of C8 directly into the Ohio River, and that cancer-causing toxin ended up in the drinking water of more than 70,000 residents along the Ohio River, all along the valley. Not only did the cancerous toxin end up in the drinking water of men, women, and children along that Ohio Valley, it also ended up and it’s going to remain in that population’s blood for 20 to 25 years. The biggest problem with having that poison in their blood is that it causes cancer. As a matter of fact, a federal judge had a team of specialized epidemiologists study the damage that the C8 poison causes to the human body, and that team concluded that the C8 poison that DuPont dumped into the Ohio River starting in 1950 caused kidney cancer, testicular cancer, and a host of illness that can be fatal.

Here’s what we know: as early as 1961, DuPont toxicologists reported that the C8 poison used to produce Teflon was producing extreme liver abnormalities in laboratory animals. Even as early as 1961, DuPont was telling their own employees that C8 should be used with extreme care, but you know what? They didn’t tell the public that. They kept it secret. Then by 1988, DuPont was warning their own employees that C8 could cause cancer, but again, they weren’t telling the public. They wanted to keep that secret. Then again, in 1997, DuPont told their employees that C8 could cause cancer again, but again, they kept that secret from the men, women, and children who were drinking the contaminated C8 toxic water every single day.

The documents clearly show that DuPont had a reason to keep the toxicity of C8 a secret. As a matter of fact, when you go back and look, this document shows as early as 1992 that DuPont was concerned that their C8 contamination would become their number one personal injury concern, but still they continued to keep that information secret from the people who were drinking the water every single day.

By 2001, DuPont’s chief in-house lawyer predicted that when the public found out about why and how these people were contracting cancer, that DuPont would be hit with punitive damages by a jury. That lawyer, he was ignored. They didn’t listen to him, and just last week a jury in Columbus, Ohio punished the DuPont company for their reckless conscious disregard for the safety of health and safety of the entire community who drank that water. A jury returned a verdict against DuPont for $12.5 million. That jury saw documents like the one on the screen that shows that DuPont scientists were so concerned about the dangers of C8, that high levels of C8 might require the public to actually wear gas masks in order to live safely along parts of the Ohio Valley. The bad news is that the incriminating and remarkably callous documents went downhill even from that.

To talk about DuPont’s poisoning of the Ohio Valley is Gary Douglas, one of the trial lawyers who tried the case against DuPont last week. Gary, take us all the way back to the beginning of the C8 story. What is this chemical, and why did DuPont start using it to begin with?

Douglas: Well, Mike, you know the story well, and by the way, thanks for having me here. I guess it goes back to the 1950s when this miracle concept of a Teflon pan and the non-stick pan was going to change everybody’s lives in the good old days of 1950s, but what was happening secretly behind closed doors in DuPont’s laboratories as they made billions selling Teflon, was they needed this chemical C8, which as you know is a poisonous and causes cancer, they needed this chemical to make the product. Behind closed doors in their secret laboratories, they understood way back in the late 50’s and early 60’s that it was potentially toxic and possibly may cause cancer.

They started over decades to conduct a series of tests on laboratory animals from rats to rabbits and beagles and monkeys, and you know this story well, Mike. They got the news that they didn’t want to have, which was that it was in fact something that can cause cancer and was extremely harmful to people, especially if it got into folks’ drinking water, which as you know and as you explained before, they were dumping it by the tens of thousands of pounds into the Ohio River and emitting it from their massive smoke stacks into the sky, and it made its way across the river into the well fields where people, innocent folks, would get their drinking water from. That’s how this whole story unfolded, and it was kept secret.

Papantonio: Gary, you were able to show in trial, you actually have hit DuPont, you’ve hit them three times. I think the first time you hit them for 1.6 million. The second time you hit them for 5.6 million. This time you hit them for $12.5 million. After handling those cases, is it apparent to you that after very few years, the company understood that their own studies showed that C8 was a compound that was poison and would potentially cause human disease? Was there any question that a jury could have to wrangle with in the cases that you’ve tried?

Douglas: There is no question, and I think the reason for the increase in the verdicts is because we’re learning how to deal with how they have tried to defend and obfuscate the truth over the years. I like to say they’re in the business of manufacturing deniability, and rather than own it, and step up to the plate, and be transparent with the folks who are drinking their poison, who were unknowingly drinking their poison, they went about a strategy to hide and obfuscate and create deniability and do studies that were designed to find nothing. They hid the fact for years from these poor, innocent folks that C8 was in their drinking water.

Papantonio: Gary, you have about 3,600, 3,700 cases just how Ohio Valley right now. Again, you’ve shown this company time and time again. The juries just are furious once they hear the facts. Is the company softening on their position? Are they trying to do the decent thing, and that is to pay these people for their cancers, and their thyroid disease, and the all sort of [colitis 00:07:00] disease that they’re suffering from?

Douglas: Unfortunately, Mike, I don’t think so. I think this is one of the most egregious cases of corporate malfeasance in the history of America. I just think it’s a corrupt corporate mentality where they have for decades dug their heels in to fight this, and they just can’t get passed themselves, and they continue to dig themselves in. We hope that with these verdicts one after the next, then one after the next that some folks at corporate headquarters are going to wake up and say, “Well, what the heck is going on here? It’s time to do the right thing for these f-, poor folks in the Ohio Valley.”

Papantonio: I heard about the job you and a lawyer from our firm, Wes Bowden, did on that case up in Columbus, Ohio this last go around. I think what the jury apparently was most impressed with was your level of range at what you had seen. You talked about in one of your closings the fact that one thing that made you so angry was the fact that this is a biopersistant poison that’s in these people’s blood for 20 to 25 years. Talk about that a little bit.

Douglas: Well, you mentioned a little bit about the outside of the show. I just got to say, by the way, you mentioned Wes Bowden, who is a terrific trial lawyer, and couldn’t have had this last victory in court without him, but the biopersistance is something that resonates with folks because as we’re sitting there in court and our client, Kenny Vigneron, his cancer was diagnosed in 1997, he still has this cancer-causing chemical all of these decades later coursing through his blood.

This is something that I think resonates with jurors or anybody who has a sense of some sort of decency. They didn’t just pollute the river, they polluted people, and they didn’t just pollute people, they polluted them with a chemical that will not leave their body for decades. You have to walk around for decades knowing that this chemical that may cause cancer is still coursing through your blood. It just resonates with jurors, and it is easier to get enraged and angry when you’re trying a case like that.

Papantonio: Well, they said that your closing argument was superb, and I’ve seen that anger before. I know in this case it simply is appropriate, but I’m wondering about how … This started in 1950. How is it that corporate media never reported this story, and they’re still really under-reporting this story about how serious this is? What’s your take on how that happened? Why is there no story out there from corporate media?

Douglas: Well, of course, it doesn’t help the corporate America for jurors and folks to hear about stories like this and how things really work, and that chemical companies like DuPont just about have free reign. You think that the EPA is out there, we’d like to think, anyway, the EPA is out there and our government’s out there protecting us from companies that may dump harmful chemicals in our drinking water or pollute the air, but the fact is there’s only so much that they can do.

These corporate entities like Dow, DuPont, you name the company, they’re so entangled with the regulators that these stories get suppressed, and I think just folks get desensitized to this. We’ve heard so many stories like this that it’s just hard to get traction amongst regular folks, but again, it’s like folks like you, Mike, and you failed to mention that we tried those first two cases together, and you’re a mentor of mine, and you know that one of the ways to get the message out is to try these cases, and that’s what we’re doing.

Papantonio: Gary, I got to tell you something. I really mean this. I honestly believe you’re one of the best trial lawyers in this country, and it pleases me to know that you’re out there going after DuPont. I know the people in the Ohio Valley are going to get justice. On behalf of those people, I certainly thank you for the effort that you’ve shown in this last trial. Thank you very much, Gary. Thank you for joining me.