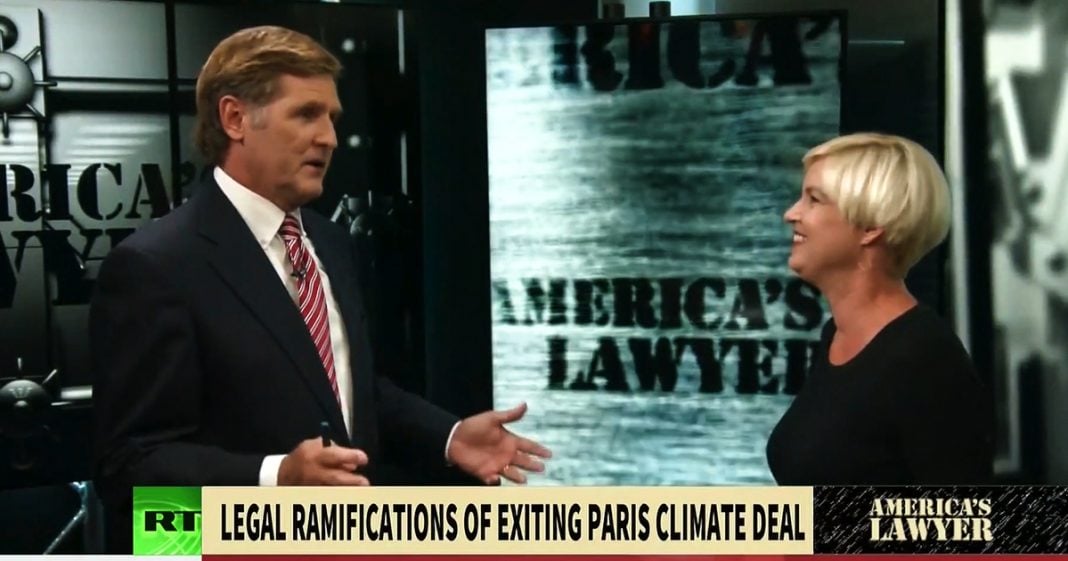 Via America’s Lawyer: Mike Papantonio is joined by Mollye Barrows, Legal Journalist for the Trial Lawyer Magazine, to discuss the legal ramification of the Trump Administration’s decision to pull out of the Paris climate accord.

Papantonio: The United States joins Syria and Nicaragua as the only countries in the world to reject the Paris Climate Accord, really. But Trump’s decision to pull out of the global agreement may not be as simple as it seems. Joining me now to talk about that is, about the legal issues surrounding the Paris deal is Mollye Barrows, legal journalist with The Trial Lawyer Magazine. Mollye, first of all, what’s the deal supposed to do?

Mollye: Well, essentially it’s voluntary, really. All these countries have come together, and they’ve said, ‘Hey, we’re going to come up with these individual voluntary plans to reduce greenhouse emissions.’ The United States has agreed to attempt to reduce greenhouse gas emissions by up to 28% by 2025. Well, each individual country, each individual plan is voluntary. The legal requirements come in when they start talking about accountability and reporting. Even those legal requirements are more about global peer pressure if you will, coming together every five years to set goals as established by science, taking a look at those goals, reporting if they’ve met them or not to the public as well as to each other. But again, that goes back to more of a global peer pressure. But that’s where the legal requirements come in as far as what the United States has agreed to do and what they’re bound to with this agreement.

Papantonio: The process of pulling out of this thing is not that clear cut. Explain what’s involved. I mean Trump just thinks, ‘Okay, well, I’m got to announce it, therefore I’m going to pull out.’ It’s a little more complicated, isn’t it?

Mollye: As with most things I think that this president tries to take a stand on, it’s not as simple as it would come across. We just signed on in November of last year. It was an executive order signed by President Obama under his administration. According to the Paris Agreement you can withdraw, but you have to be … The earliest you can do that is three years. So we’re looking at November 2019 before we can even legally give notice that we want to withdraw, and then you still have another year before that withdrawal is even effective. We’re looking at four years down the road, November of 2020, before we can even effectively get out of this, if they decide to withdraw just from the Paris treaty alone or the Paris Agreement.

Papantonio: So that’s an obstacle. Are there any other obstacles right now or is that the biggest one?

Mollye: Yes, that’s one of the biggest ones. Now there is another angle that they could take, which is to withdraw from the United Nations Global Climate Change Agreement Treaty if you will that they agreed to in 1992. Now that was signed by then President George H. W. Bush and it was also ratified by the Senate, so that’s going to be a little more complicated if they decide to go that route. By exiting that treaty they would essentially pull out of the Paris Agreement as well, because that’s the foundation for all these countries to agree that something needs to be done about global warming, about climate change, what can we do to have our role in it.

The Paris Agreement is really about the steps to take to reach those goals. If they don’t want to go through the lengthy process of withdrawing from the Paris Agreement, they could go through a quicker process of trying to withdraw from the 1992 agreement. Why say a quicker process? If they actually withdrew from it, if they successfully withdrew from that 1992 treaty, then they would be out of it in a year. But the problem is because it was ratified by the Senate and also signed by then President George H. W. Bush, they may have to go through, they may have to get … He may have to get congressional approval in order to withdraw from the 1992 agreement. Remember also Trump’s also saying, ‘Well, hey, maybe we won’t pull out altogether. We just need to renegotiate.’ And they’re like, ‘Oh no. You don’t get to do that. I’m sorry. One party wanting to renegotiate. You can change your contribution, but we’re not going to let you just pull out as you want to.’

Papantonio: It’s almost as if nobody gave him the legal analysis before he did this, and the worst thing is now we, as a world leader we’re in the back seat. China is at the table, other countries are at the table in leadership positions. It affects us in the worst kind of way. Thank you for joining me on that Mollye. The story to me is incredible.