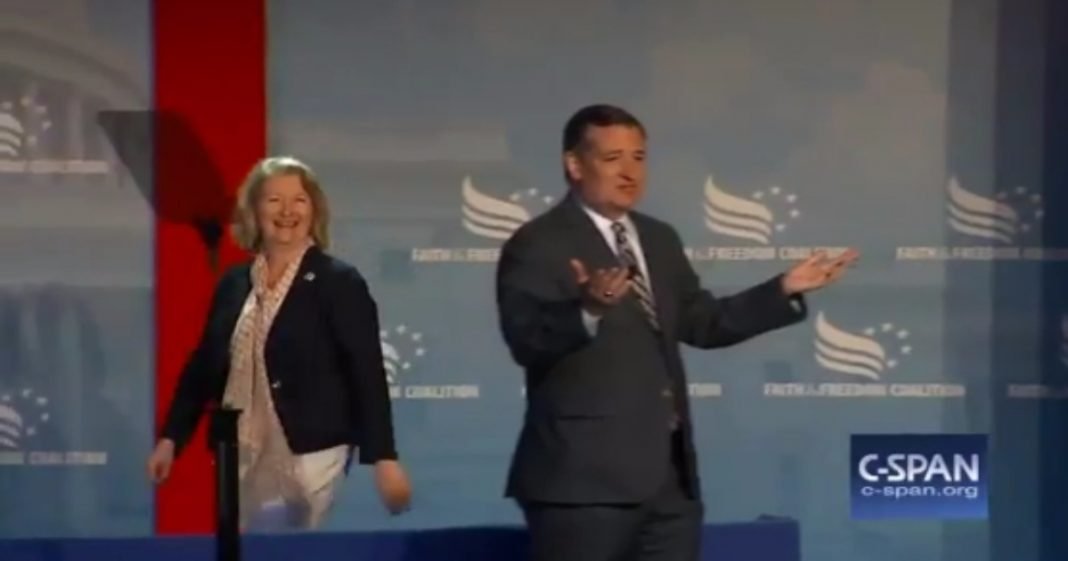 It’s safe to say that Senator Ted Cruz is one of the most interesting elected officials in the Senate – he loves quoting the “Princess Bride,” he once bought 100 cans of soup after his honeymoon, and he looks an awful lot like Kevin from The Office or Grandpa Munster (depending on your age).

But on Thursday, Cruz wasn’t entertaining because of what he did but because of what was done to him. Cruz was addressing a crowd at the Faith and Freedom Coalition’s “Road to Majority” conference when he was abruptly cut off by a booming announcer’s voice and the entrance of another speaker.

please enjoy this footage of sen. ted cruz being forced off the stage at a faith and freedom conference pic.twitter.com/BtWIVDLxLs

Cruz was busy thanking those an attendance for their religious faith, using his usual dramatic talking style to enthrall the audience. As Cruz thanked the religious attendees for their contributions of time and energy in political matters, the announcer introduced a new speaker.

Hilariously, Cruz had just declared that he wanted to say two things right before getting interrupted. He was able to list the first but was cut off before he could utter the second half.

Cruz looked around confused for a moment as the next speaker took the stage before throwing his hands up weakly and walking meekly from the stage.

A statement was issued by the coalition which apologized for the event and said that the interruption was a mistake.

“Senator Cruz had not completed his remarks when a member of the audio-visual team mistakenly announced the next speaker. We sincerely apologize to Senator Cruz who is a great friend of this organization and people of faith across the country.”

Oh, Ted. At least that’s not the worst thing to happen to you in the last couple of years, right buddy?