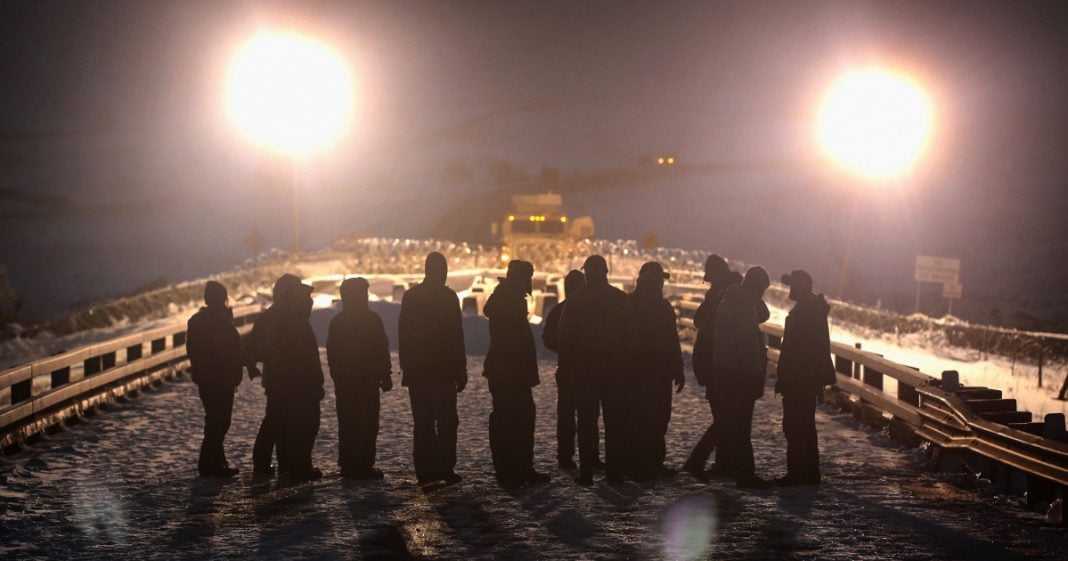 Sam: So Will, in the last segment you were basically giving us the broad strokes of the Dakota Access Pipeline fight. We should say, at this point, the Trump Administration has more or less green-lit it. Before we get to the actual status of it now, I just wanted to ask you one more element of this fight, because we have a sense of why the government, in the form of the police and the sheriffs and state troopers and what not were so virulent and we’re gonna know of, basically from these leaked documents, the coordination that was with the private, I guess, mercenary force on some level, and why it was so … What was the relationship between the indigenous fight between Native people who did not want their specific water supply threatened, and the broader climate activists who were there working with them. Was there any conflict or was that immediately reconciled because the activists saw that this could set a precedent, which would help in that cause, and indigenous folk also equally care about the planet.

Will: Yeah. I don’t have a very specific knowledge of that, but generally speaking what I observe is that this is a fight that was instigated by indigenous people. They were gaining a lot of traction, attention, they were successful in making this a major issue and it’s not hard for climate justice activists to recognize the climate element of this. And, of course, a lot of the indigenous people involved in this have climate change at the forefront of their concerns as well.

They formed an alliance, every major national environmental group that I’m aware of was involved to some degree, if only supporting things from afar through promoting the struggle against the Dakota Access Pipeline. There was certainly an alliance between the indigenous people trying to protect their water, trying to protect their sacred sites, burial sites and so on that were being chewed up by this project, and people whose main concern is the climate crisis.

I think one thing you might be pointing to here is that TigerSwan, in one of the internal documents we got, well actually in multiple of them, referred to the importance of exploiting rifts between Native and non-Native people involved in the struggle, and there’s a strong indication that some of the infiltrators that they tasked with going into these camps to protest, specifically were there with an intention of trying to exploit those risks, increase the dissension between different elements of the opposition to the pipeline.

Sam: TigerSwan, tell us, what is TigerSwan, as we talk about these documents that The Intercept has published?

Will: TigerSwan is a private contractor that started out working for the US military and the state department overseas in places such as Afghanistan and Iraq. They were founded in 2007 by an Army DELTA FORCES veteran named James Reese, specifically with the idea of competing with Blackwater, which is sort of the best known, most successful private mercenary corporation that did work for the US military in that particular period of the so-called War on Terrorism.

The company TigerSwan, which is based in North Carolina, has increasingly marketed its services to private corporations in recent years. We are just, I think, in the beginning stages of understanding the extents to which it is involved in contracting with private corporations in the United States. But after the dog fighting incident that you mentioned earlier where a private security firm was recorded biting protestors and bloodying them, which caused a major uproar. TigerSwan came in and became the company that oversaw all of the different private contractors in behalf of energy transfer partners and set up their own intelligence gathering operation that paralleled an intelligence gathering operation on the part of police, who were more I guess conventionally involved in those sorts of things.

They work together, the public law enforcement work together with TigerSwan in monitoring these protestors through everything from looking at their social media feeds on a constant basis to using informants, using electronic and digital surveillance of various kinds of aerial surveillance through helicopters and these sorts of things. Those things are among the things that these documents indicate. Also, TigerSwan talks explicitly in the documents about how their mission includes supporting the prosecution of protestors who have been arrested and are facing charges for their role in protests.

Sam: I find that element less … I mean, I find it disturbing. I find it less disturbing than the interaction between this private entity and the almost like, seamless interaction between this private entity and the police forces there. This is not a situation where, again, where we have large protests in the middle of a crowded area, we need to protect the public and what not. This is, very much it seems to me, basically the police force simply being an extension of a private entity’s police force in engaging in this type of …

Will: If you start with the assumption that the police’s job should be to protect public safety and play a professional role at an arm’s length from the issues involved in these protests and protect both the rights of the entity being protested and the protesters themselves. Well clearly that didn’t happen, clearly, based on the relationship that the police had with this private mercenary corporation that was accountable only to this oil and gas company. There was a very, as you said, seamless relationship there and the police … This raises a lot of questions about the role of policing overall, not just in this protest but that fact that the police so easily fit into this relationship, or so easily struck up this relationship with this private corporation.

Why is that they felt empowered to do that? Why is that there aren’t laws preventing that sort of collaboration. One thing that I’m finding, through talking to scholars and experts of various kinds is that really, there aren’t any laws that prevent that sort of collaboration, and it’s a big loophole that is being exploited on the part of private corporations that are working with police that are favorable to them. This isn’t the first time something like this has happened, although I think the scale of this, the fact that this was a multi-month counter insurgency style campaign maybe is unique, and I hope will push the issue more into peoples’ consciousness because I think it is something that needs to be addressed.

Sam: Just in 20 seconds, what is the status of this pipeline today?

Will: The pipeline’s essentially been completed, the company’s been doing some tests by sending some volumes of oil through, testing the pumping stations setup along the pipeline and so on, and there have actually already been at least two leaks that I’m aware of in the pipeline and it’s not even fully operational.