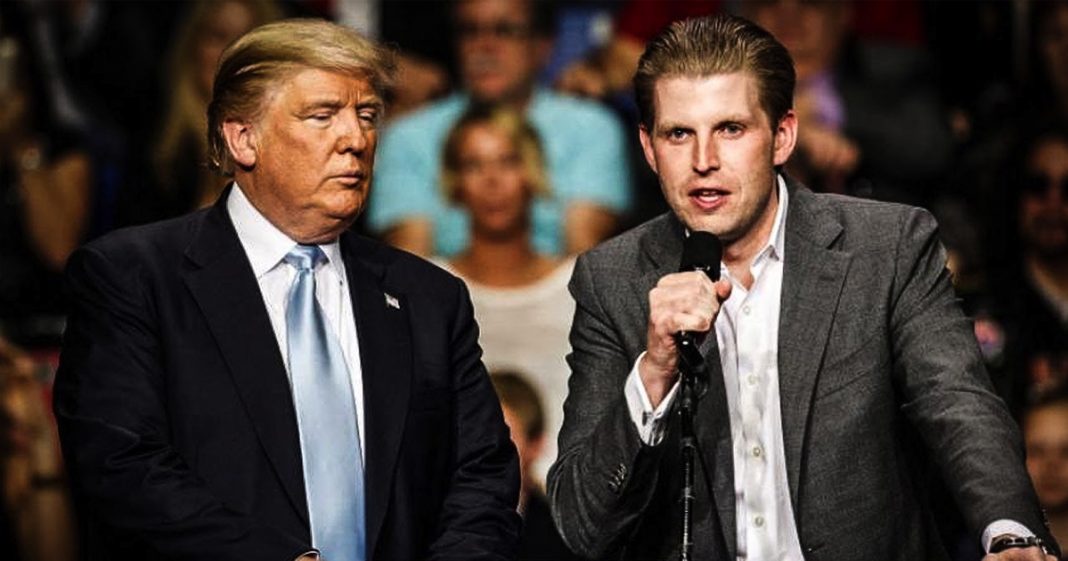 According to a new report by Forbes, the Trump family – specifically Eric Trump – funneled money to his companies that had been donated by people under the belief it was going to St. Jude’s Children Research Hospital.  The Trump family literally stole money from children with cancer, do you need any more proof that these people are pure evil? Ring of Fire’s Farron Cousins discusses this.

According to a new report in Forbes, Eric Trump funneled money that was meant to go to the St. Jude’s Children’s Research Hospital back to the Trump Organization, Trump properties. Basically took money meant for kids with cancer and instead gave it to the Trump Organization. Here’s how this little scam from Eric Trump and the Trump family worked. According to Eric Trump, while he was speaking at one of these fundraisers for St. Jude’s, he told the people in the crowd that, “What’s great about using these Trump properties that we own is that we don’t have to charge you for it. We get to use this area for free so all your money goes to the charity.” That is what he told those audiences.

Behind closed doors, Donald Trump apparently got a little pissed off that Eric Trump had not been charging for use of the properties, so they decided to go back and not only charge the charity for use of their properties but overcharge. They inflated their rates for the charities to use their properties so that they could make more money and recoup all those years that they didn’t charge them for the use of the Trump golf course or Trump hotels. They took money which totaled hundreds of thousands of dollars over seven years that was meant for children with cancer, and kept it for themselves.

Eric Trump did this at the request of Donald Trump, who as everybody knows, is our current president of the United States. Ladies and gentlemen, at this point in American history, this country is being run by a Scooby Doo villain. He literally took money away from kids with cancer and other illnesses. He took their money and kept it. People believed they were supporting a good cause, but instead it went into the pockets of Donald Trump. This really is like some kind of villain out of a bad movie who comes up with a dastardly plan. “I’m going to take the money from the kids with cancer.” You can’t write stuff like this, but that is what we’re dealing with. That is what our president did, according to this investigation, and Eric Trump was right there to help him charge these people for use of their property instead of giving that money to charity.

Also, according to the report, Eric Trump took some of the money that was meant for St. Jude’s and instead directed it to his charity, which then in turn also paid for the use of Trump properties at other events. Eric Trump is not just doing his father’s bidding. He was already trying to funnel some of the money out and get it back to himself and his father’s company.

This is disgusting. This is deplorable. When we talked about that basket of deplorables, it doesn’t get any more deplorable than stealing money from sick children. I don’t think that anyone in this country should be able to read this report and still say, “You know what? I think Trump’s an okay guy. I think Eric Trump’s pretty decent.” No, they are monsters. They do not care about children. They do not care about anyone in the American public. They each and every one of them only care about themselves. What happens to the rest of their family, they don’t care about. It’s all about them. They’re willing to let children die because they want to pocket that money that was supposed to go to a charity.