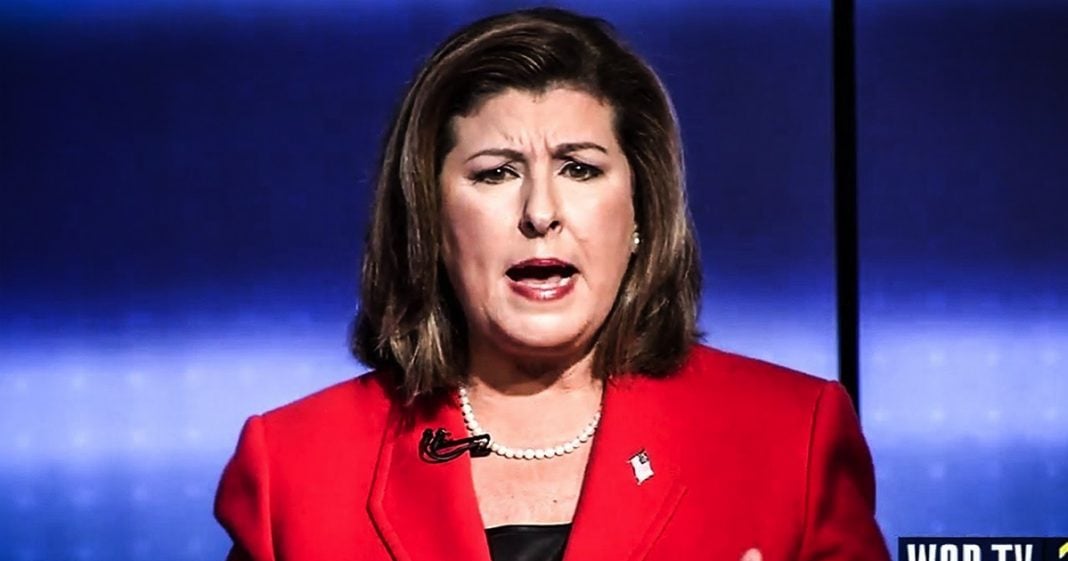 Karen Handel, the Republican candidate for Georgia’s 6th Congressional district House seat, apparently forgot how to hide the truth during a debate with her opponent Jon Ossoff this week when she freely admitted that she doesn’t support a livable wage for workers. Georgia’s minimum wage is currently more than $2 below the federal minimum wage, making it one of the lowest in the country.  Ring of Fire’s Farron Cousins discusses this.

Farron:                       This week there was a debate between the two candidates who are running for the Georgia House seat for the sixth district in that special election. John Ossoff, the Democrat, versus Karen Handel, the Republican. Now during this debate they were asked about the minimum wage. This is what each candidate had to say about that.

Jon Ossoff:                     Yes I do. The minimum wage should be a living wage. I think we can raise it indexed to the cost of living because the cost of living varies widely in urban and rural areas in different states across this country. I think that increase needs to be implemented at a pace that allows business owners to adapt their business plan so they’re not shocked, their business plans are not shocked by a sudden increase in labor costs. Look, if someone’s working a 40 hour work week they deserve the kind of standard of living that Americans expect. That’s part of the American dream and there are too many folks who are having trouble making ends meet.

Karen Handel:                 This is an example of the fundamental difference between a liberal and a conservative. I do not support a livable wage. What I support is making sure that we have an economy that is robust with low taxes and less regulations so that those small businesses that would be dramatically hurt if you impose higher minimum wages on them, are able to do what they do best. Grow jobs and create good jobs for people in the sixth distract.

Farron:                       Notice that in Handel’s answer she doesn’t refer to it as a minimum wage, she says, “I do not support a livable wage.” Then she goes on to talk about, well, nothing. She just uses Republican talking points. Less regulations. Less taxes. More jobs. Economy good. Words that literally mean nothing to anyone because when she’s saying lower taxes she’s talking about lower taxes for the top 1% who really aren’t hanging out in Georgia’s sixth district. No offense, but you don’t have a lot of Forbes 25 in there running businesses. Meanwhile Jon Ossoff gave a very clear answer about what was going on and how to make it so that businesses can prepare for it. He talked about cost of living increases. He talked about tying it to other standards and informing business. He talked policy not talking points. That was the difference, obviously aside from policy itself, between those two answers. But here is a reality check for Karen Handel. The minimum wage in Georgia’s sixth district in the state of Georgia actually, is $5.15 an hour.

Do you know what minimum wage was when I got my first job in the state of Florida in the year 1998? It was $5.15 an hour. Georgia, almost 20 years later, still has the same minimum wage that I started working at in 1998 when I got a job at McDonalds and Georgia hasn’t updated theirs. Now, the Federal minimum wage is only $7.25 an hour. That covers a lot of workers in that district and in the state, so Georgia doesn’t feel the need to raise it. But you still have plenty of people who are working for that wage. Now, in the sixth district of Georgia a living wage, according to calculations, would be $12.01 per hour. Minimum wage workers in that district are making less than half that. And Karen Handel doesn’t support raising it, because lower taxes and less regulations and things that really don’t affect the small businesses that she’s talking about. They affect big businesses, the ones who go out there and pollute and exploit cheap foreign labor and want to get away with violations of [OSHA 00:03:53] laws and EPA laws, but they don’t affect the small businesses that she’s specifically talking about. They only affect the top 1% and that is all that people like Karen Handel and the entire Republican party care about.