Ahead of Thursday’s testimony, the opening statement expected to be read by former FBI Director James Comey has been released by the Senate to the public.

The several paged letter reads like a narrative and contains Comey’s thoughts concerning several meetings he had with President Trump in the months leading up to and following his Inauguration.

Among many other shocking details relayed by Comey (in surprisingly well-written prose) is a moment when Trump demanded Comey’s complete loyalty. 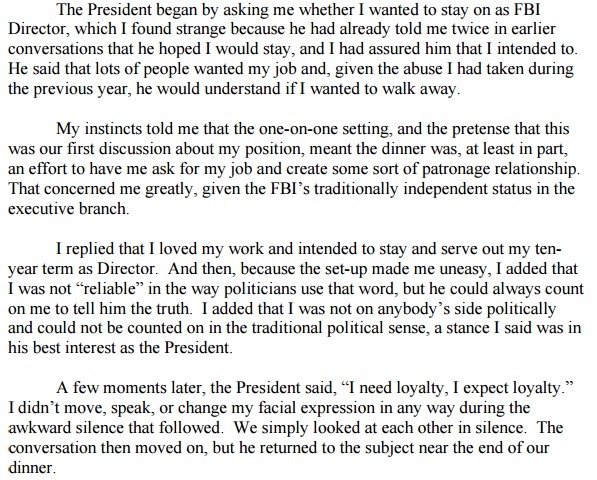 Comey’s statement, consistent with earlier reports, show his continued efforts to maintain distance between his non-political position and the ever-familiar tactics of President Trump.

At the time that President Trump emphasized the importance of loyalty, Comey never outright denied the President his request, but instead sat in stony silence. Later, during the same dinner, Trump asked for “honest loyalty,” to which Comey agreed.

Comey also related in the letter his explanation for why he wouldn’t have passed this loyalty demand, or Trump’s request to drop the Flynn investigation, onto any other branches of the intelligence community.

With such an informative beginning to a hearing that has yet to even begin, we can expect Thursday’s hearing to be quite the show-stopper. After all, as Trump once said, Comey is a real showboat.

You can read the remaining of Comey’s opening letter here.