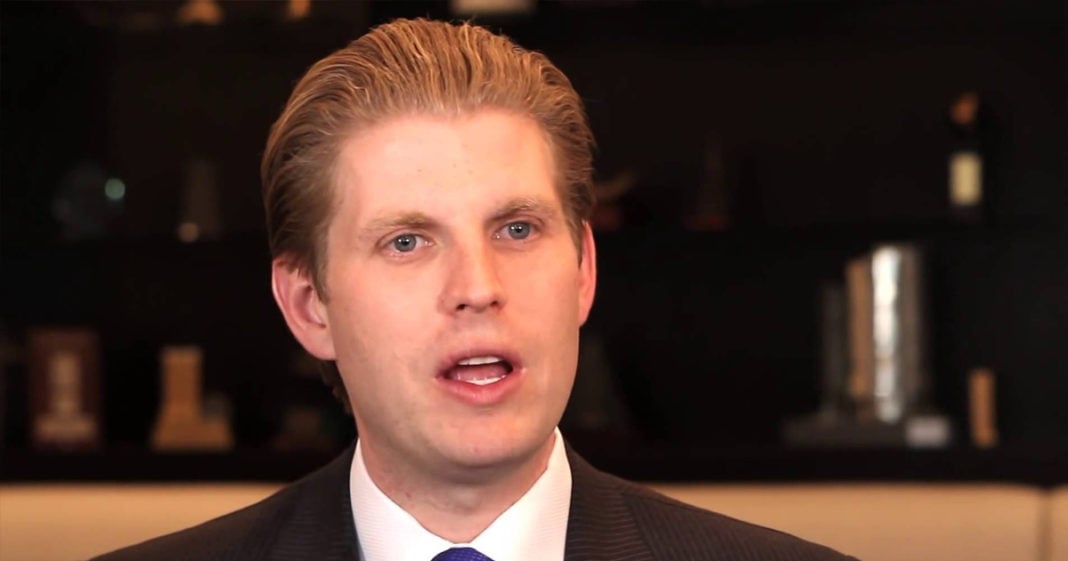 President Donald Trump’s youngest son Eric declared Tuesday that those who express negative feelings towards his father are “not even people.”

Trump made his disturbing comment on Sean Hannity’s show Tuesday night, saying that the hatred he sees expressed toward his father and his father’s decisions cause him to consider those opponents inhuman.

“I’ve never seen hatred like this,” Eric Trump said. “I mean, to me, they’re not even people.”

Eric Trump, the son of the President of the United States, says Democrats aren’t even people. pic.twitter.com/2uhP8o8579

While some may dismiss Trump’s comment as mere hyperbole and a response to aggression towards his father, the reality is that dehumanizing ones’ enemy is a long-standing element in oppression, fascism, and genocide.

If Eric Trump and the rest of Trump’s associates can convince themselves that those who oppose them are not even human, they won’t think twice about taking away freedoms from those “non-humans.”

If one isn’t human, why would one need to worry about pesky things like civil liberties or due process? Why worry about infringing on the rights of others if they don’t even warrant the label of fellow human?

In warfare, this type of dehumanization helps soldiers reconcile the death and destruction they see and carry out. If one imagines that the men on the other side of the battlefield are such a threat that they aren’t even human, it makes blowing them up that much easier.

It’s a well-documented, nefarious phenomenon that humans experience, often times without even realizing it. A Washington Post article by a man who spent time around soldiers in Afghanistan shared his own experience witnesses dehumanization in warfare. At one point, as an enemy crawled nearby, his legs shot off, a crowd of American soldiers cheered.

“But of course they have dehumanized the enemy — otherwise they would have to face the enormous guilt and anguish of killing other human beings. Rather than demonstrate a callous disregard for the enemy, this awful incident might reveal something else: a desperate attempt by confused young men to convince themselves that they haven’t just committed their first murder — that they have simply shot some coyotes on the back 40.”

Of course, Eric Trump isn’t talking about war when he criticizes his Father’s opponents, but it is those same human impulses that influence him now. His failing is to recognize that political opponents are just as human as he, and just as deserving of respect.

Trump is applying this blanket statement to the entirety of the Democratic party, as well as many globally who do not wish President Trump the best. For Eric and many others, those who disagree with him aren’t just the enemy – they’re not even human.

This “otherizing” of millions of innocent Americans is dangerous, and it isn’t something to take lightly.