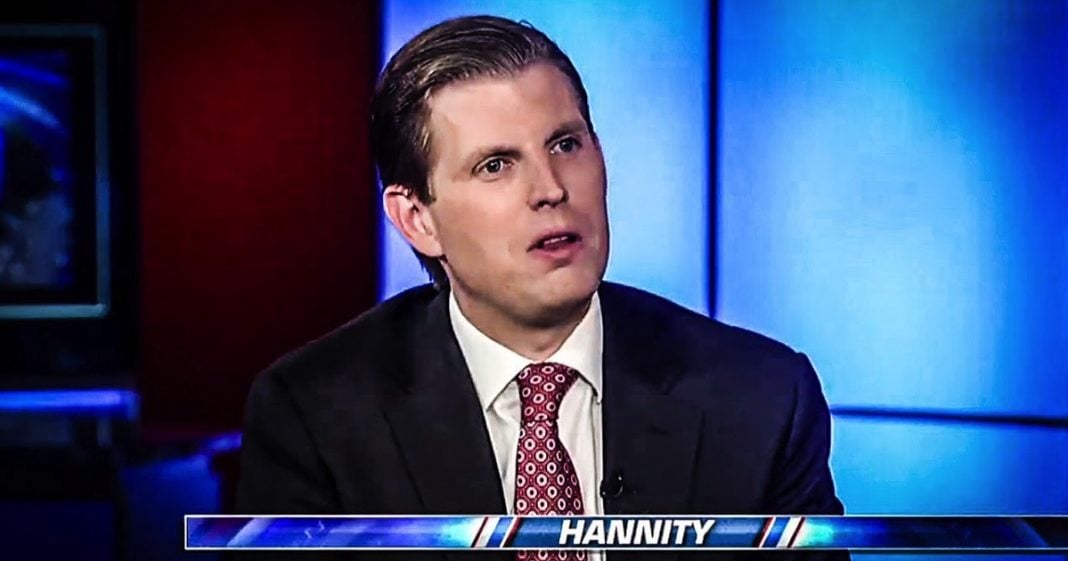 Donald Trump’s son Eric is making headlines for his scamming of a children’s cancer charity, so he decided to appear on Sean Hannity’s failing Fox News show to attack Democrats. Eric Trump said that the people criticizing his father and “obstructing” his agenda – the Democrats – aren’t even human beings.  Ring of Fire’s Farron Cousins discusses this.

Farron:                       Not unlike Kellyanne Conway, Eric Trump is super upset that people are being so mean to his daddy, so he did what every member of the Trump Administration does when they want to complain about people being mean, and he went on Fox News, specifically Eric Trump went on Sean Hannity’s failing news program, to just talk about how darn mean those liberals in Washington are being to his daddy. Take a look.

Farron:                       Now, keep in mind, this man, who’s complaining about people being so mean, and full of hatred, and they’re not even human, this is a man who stole hundreds of thousands of dollars from kids with cancer, but I digress. The real fact here is that Eric Trump doesn’t understand what is actually happening in this country. People don’t just dislike Donald Trump. We’re not just being mean to him because it’s fun, or because he’s an easy target, or because he gives us so much fodder. No. We’re doing it because we’re calling him out on his lies. We’re calling him out on his horrendous policy proposals that are going to screw over the poor to benefit the top 1%, basically your family, Eric Trump, and you know that.

You know that everything your father is trying to do in Washington, D.C., these very things that you claim the Democrats are trying to obstruct, everything he is trying to do is to benefit you, and your family, and himself, and a few other members of the top 1%. The bottom 99% in this country, which includes veterans, it includes seniors, it includes a hell of a lot of people who voted for Donald Trump, they get nothing. In fact, they get less than nothing because they’re going to lose quite a bit. We’re going to lose a lot of our veterans’ benefits. We’re losing a lot of school programs and teacher eduction. 23 million of these people are losing their health insurance under the Republican plan, should it pass. So yeah, we have a right to be a little angry.

On top of that, you want to talk about obstruction? You said you’ve never seen it like this before? Then where the hell were you for the last eight years, jackass? This is what the Republicans did. They made it a plan, and they didn’t even hide that secret. Statistically, the most obstructionist Congress in history led by the Republicans, of which you are a part of. Don’t come to me with all this nonsense about Democrats being the party of obstruction. You can whine to Sean Hannity all you want. That guy doesn’t know a thing to save his life. He doesn’t know what’s actually happening in the world. He’s Fox News’ useful idiot, and now you are too.

People in this country are suffering. People in this country could die when your father strips them of their health insurance coverage, so yeah, they’re going to be a little testy about that. They’re going to be a little angry, and as you said, the chair of the DNC is just some whack job, the Democratic Party’s imploding, are you serious? Like, are you paying attention to anything? There’s problems in the Democratic Party, absolutely. But we’re not the ones imploding, buddy. You need to look at the RNC for that. Your party doesn’t know where they stand on anything. They had to try several different times just to pass a bill that they all actually agreed on, so yeah, maybe you need to focus on what’s happening with the Republican Party and just leave the Democrats out of it for now. They’re going to be just fine, but your party, because of your father, is on the brink of extinction, and I don’t think anybody’s going to be crying when that species finally goes extinct.