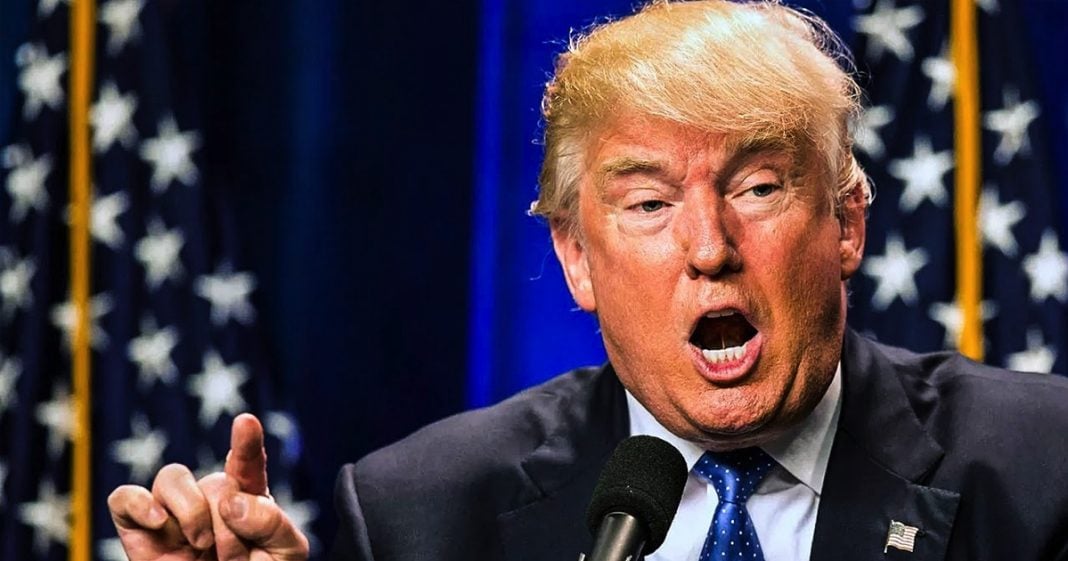 According to the latest round of polling, more Americans believe that impeachment proceedings should begin against President Trump than people support the president.  Less than 5 months into his term and the President is already approaching a historically low approval rating and the public is ready to be rid of him.  Sad. Ring of Fire’s Farron Cousins discusses this.

I know Donald Trump likes to think that negative polls about him are fake news, but he really needs to start paying attention to what the American public believes right now. According to the latest route of polling — in fact, according to all polls — Donald Trump’s popularity is once again slipping. Now he did have a slight uptick in his approval rating back in March when he decided to send a few dozen Tomahawk missiles overseas and he got a little bit of a bounce from his overseas trip where he embarrassed the United States at every turn. Not sure why his approval rating went up at that point, but it did a few ticks. Either way, Gallup now has his approval rating at 36%, which is only one point away from his all-time low of 35%. Polls across the board, even right wing polls, Rasmussen and Fox News polls, show the president with a dipping approval rating, but what’s interesting here is another poll that shows that one aspect of the president’s life, he’s actually getting higher numbers on and that is the percent of Americans who support impeaching the president.

According to the latest polls, support for impeachment is now up to 43% among the American public, so while Donald Trump’s approval rating continues to plummet, support to begin the impeachment process continues to rise. Almost half the country at this point thinks that we have enough evidence to go forward and begin these impeachment proceedings, so Donald Trump may not like to think about the fact that the American public not only doesn’t approve of him, but they want to get rid of him as our president. That should tell him something, but again, he’s not going to pay attention to these. To be honest, at this point I don’t know that there’s anything you can do to at least stem the tide of the growing calls for impeachment at this point.

Now a lot of people have said if we begin the impeachment process too soon, we’re going to, you know, basically screw our changes and give Donald Trump even more power, and that is absolutely true. We need a little bit more evidence. However, we do have the evidence of the obstruction of justice on several different instances, so that alone right there is the evidence we need. Now I guess we need a little more facts to kind of bolster that evidence, but it exists. We’ve got Comey’s testimony coming up on Thursday. Something is going to happen. I refuse to believe that Donald Trump is going to make it through these first four years without some kind of impeachment process at least being attempted in earnest.

Whether or not Republicans go along with it and vote him out of office is another thing entirely, but given what we’ve seen already from people like representative Al Green, representative Maxine Waters, it is very likely that the impeachment process will begin most likely before the end of this year, so Donald Trump can continue getting on Twitter, yelling about fake news, but he really should start paying attention to the fact that the American public really, really seems to dislike him as our president.