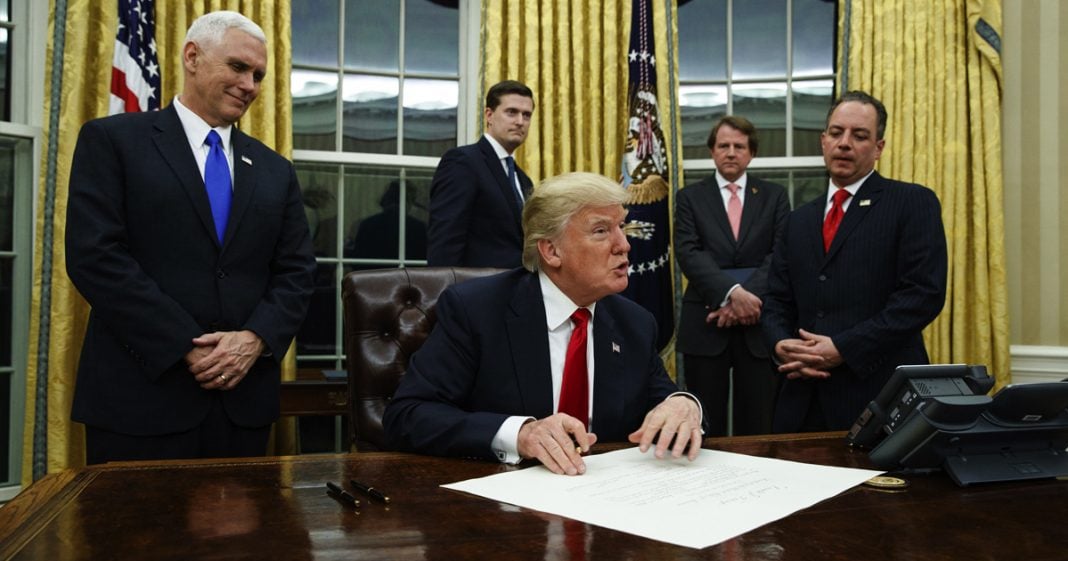 On Monday, President Donald Trump held one of his many signing ceremonies intended to showcase his latest executive order or political action. But unlike so many other similar events held by Trump, this one was missing something pretty important – an actual order for Trump to sign.

Yes, it appears that our President, who is most dedicated to ratings and pageantry, held a signing event for a memo and letter he penned to Congress voicing his support for privatizing the Air Traffic control industry.

The problem is, there was no binding nature to his signature, and was merely a public display. President Trump “signed” his memo surrounded by key members of his administration and lawmakers who he invited to attend.

But truly, can one really blame Trump? Despite having been in office for months now, Trump has yet to pass any major legislation that he could proudly sign. Sure, he’s had a large number of executive orders on which he proudly scribbled, but where is his Obamacare replacement? Where is his tax reform? Where is his nationwide ban on brown people?

The toddler president instead was forced to placate himself with a bit of make-believe, a ceremony of insanity that his fellow Republicans willfully participated in.

To commemorate the event, ceremonial pens were given to the Republican lawmakers in attendance. By all accounts, it was a mockery of the real legislative process and turned what should be serious, important ceremony into mere pageantry.

Basically, by holding this public spectacle, the President let everyone know that he supports privatizing the air traffic control industry in America, but his signature made no legislative impact. Instead, his base sees the President looking, well, presidential, despite doing what amounts to pretending to take a bite of an invisible sandwich before a group of toddlers.

In case you were thinking about what President Trump could have been doing while he was filming his own version of the “Apprentice: White House Edition,” I was too.

Among many other things, Trump could have been expressing his condolences for the victims of the London attack, offering American solidarity to British leaders in the wake of the tragedy. Trump also could have been nominating the hundreds of political appointees he has yet to fill – most of which could be appointed without Congressional approval. Trump could have been visiting with his son Barron, the child he used for political points against Kathy Griffin but with whom he has been spotted infrequently in the months since becoming President.

Trump could have been doing any number of things, big or small and they all would have been more important and more real than the fake display he pulled off at the White House on Monday.