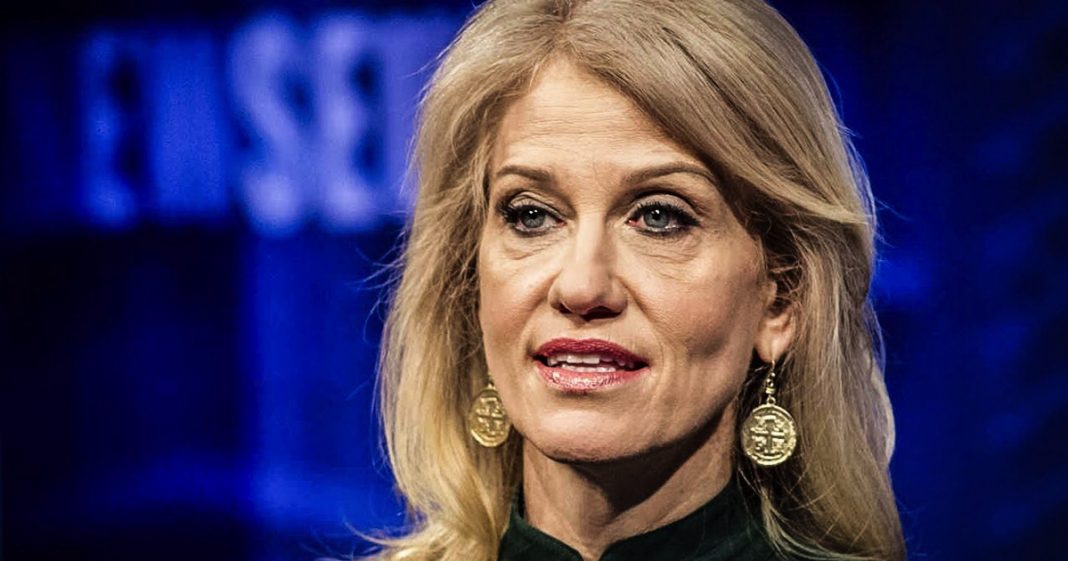 After a disastrous interview on NBC’s Today Show, Kellyanne Conway appeared on a far more friendly network – Fox News – to whine about how mean the media outlets are to Donald Trump, and she questioned why these mean people still have jobs after attacking the President. Ring of Fire’s Farron Cousins discusses this.

Farron Cousins: On Monday morning, Kellyanne Conway, went on NBC’s Today Show, to defend Donald Trump’s latest Twitter meltdown. The interview didn’t go very well, in fact Kellyanne Conway got called out many times for saying that, you shouldn’t be covering the President’s tweets in the media. So then after that disaster of an interview, she decides to go over to friendly territory. Kellyanne Conway followed up the NBC interview by going on Fox and Friends, on Fox News, where she lamented the fact that these pundits, these cable news TV hosts, still have jobs. Take a look.

Speaker 2:  Kellyanne, the President’s saying he’s trying to prevent a terrorist attack here, or another one from happening here, he wants to keep families safe, he’s going to eradicate ISIS, but then you have Thomas Roberts, who is one of the journalists at MSNBC, he’s suggesting that the President is trying to provoke terrorism here, listen to this.

Thomas Roberts: The President doesn’t want us to be politically correct right? So let’s not be PC about this. Is the President trying to provoke a domestic terrorist attack with this Twitter rant, because only to prove himself right?

Speaker 2: What’s your reaction that?

Conway: Does he have a job today? I mean that is really over the top, even by those standards. Think about what he said, for people on TV to be saying what they’re saying, a CNN anchor yesterday, calling the President an expletive, Kathy Griffin also of CNN, doing what she did last week, which is really over the top, and then blaming the Trump family. People are really losing their minds over this Presidency, instead of trying to cover the things that he’s doing to help all Americans, and really coming together.

Let me tell you something, defeating terrorism and putting ISIS truly in retreat, and eliminating them from the face of the earth, should be a nonpartisan issue in search of bipartisan support. And when you hear things like that, and people still keep their jobs, it’s truly remarkable.

Farron:                       According to Kellyanne Conway, what she told the folks at Fox News, if you’re so mean to the President, if you don’t talk about any of the good things he’s done, then you shouldn’t still have a job. Now, she mentioned Kathy Griffin in that little tirade she went on there, Kathy Griffin was in fact fired. Kathy Griffin in fact, did what Republicans did for eight straight years, when they hung effigies of Obama, and burned them and hung them from nooses, or portrayed him and his wife as primates. But yeah, forget about all that hypocrisy and be pissed off at Kathy Griffin, Republicans, you’re not fooling anybody there.

But the bottom line is this. When Donald Trump does something good, I promise you Kellyanne, we’ll cover it. Almost five months in, I’m still waiting for something good to happen, I’m waiting for this man to not be a complete waste of time for the American public, I am hoping that the next three and a half years are not completely wasted, or even worse, see this country moving backwards under Donald Trump. I don’t want him to fail and take this country down with him, I want it to succeed, all of us do. You’d have to be a real horrible person to say that, “I hope the United States goes down in flames.” No, we want our country to prosper and be economically sound, and lift the poor out of poverty, and give everybody medical coverage.

But that’s not what your guy’s working on. No, he’s working on just pissing off the entire planet one tweet at a time. He’s working on embarrassing the United States overseas, by pulling us out of the Paris Climate Accord, by attacking a Mayor whose city was just attacked. When Donald Trump does something good Kellyanne, I promise you all of the media outlets are going to talk about it, and in fact, they’ll probably be talking about it for days. But even on the issue that you’re discussing there, as far as responding to global threats, he’s not doing anything, he hasn’t even filled most of the positions in Homeland Security, that deal with those things.

So don’t get out there and say people are being mean to Donald Trump, and they need to lose their jobs, that is total BS. The only person in this scenario that needs to lose their job for being incompetent or untruthful, is you.