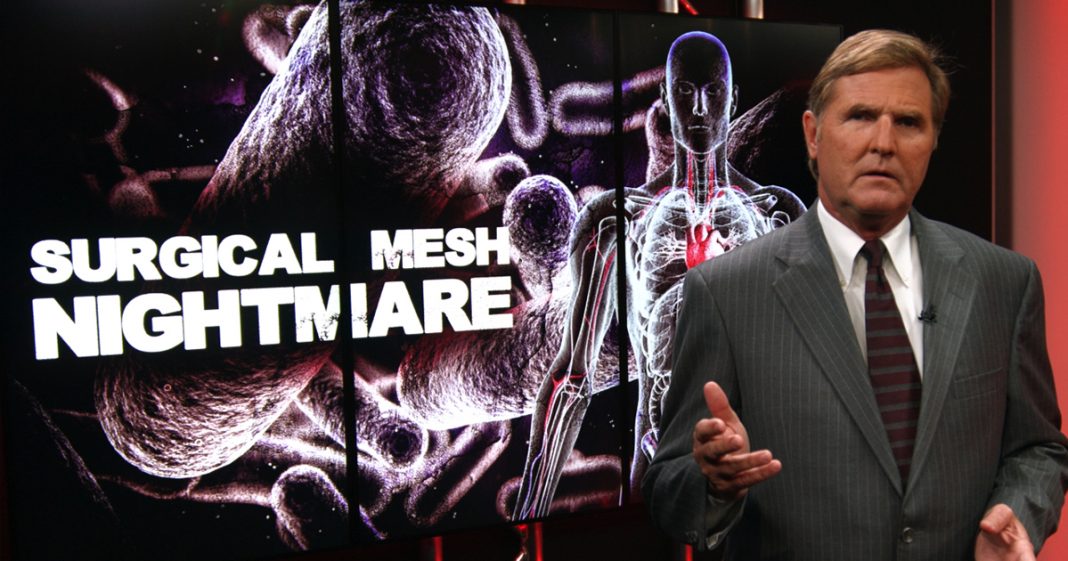 America’s Lawyer Mike Papantonio discusses the story about surgical mesh that is being implanted in the bodies of thousands of people every day. It’s not a story the corporate media would ever tell you. In fact they can’t tell you because their corporate advertisers the people who make these product won’t allow them to do investigative exposés about how dangerous surgical mesh really is. The advertising dollars are just too big.

The story about surgical mesh that is being implanted in the bodies of thousands of people every day is not a story the corporate media would ever tell you. In fact they can’t tell you because their corporate advertisers the people who make these product won’t allow them to do investigative exposés about how dangerous surgical mesh really is. The advertising dollars are just too big.

Surgical mesh reinforcement use has become routine for hernia repair and a handful of other surgical procedures that are performed every day all over America. What most patients don’t realize is that the mesh is made up of polypropylene and has the ability to oxidize and degrade directly into human tissue and throughout the entire body. The first signs of this manifestation begins with things like chronic fatigue syndrome, extreme consistent rashes, and diffuse joint pain throughout the entire body.

In addition to those issues with polypropylene that we’ve seen so often, the added problem is the use of experimental coatings that have been used mostly as a sales gimmick by manufacturers to sell doctors a product that has potential to degrade and migrate throughout every organ in the body. The pitch that the companies use is that the mesh is quick and its fast and anyone can do it… even without special doctor training.

The sales gimmick coatings have been associated with increased infections, bowel perforations, fluid build up within the wound, and overall failure of the device which necessitates a second third and sometimes a fourth surgery to correct the problem. The most interesting part of this story is that mesh is not even necessary to do the type of tissue repairs that takes place with procedures like hernia repair. For decades, doctors who are specifically trained for natural tissue repair have successfully made hernia repairs and other human body tissue repairs with natural body tissue. With no use of anything called mesh.

The obvious advantage to that is that there is no introduction of a foreign body into the procedure that has the ability to degrade and migrate throughout the body triggering autoimmune reactions. Which is what we see with the coated mesh gimmick that is being sold to any and every doctor who wants to perform a procedure without any kind of special training.

Here’s the real stinger, none of these procedures had been studied before they received approval by the FDA. In fact, the only reason that these products are on the market is because of a fast track 510 K procedure that the FDA permits for these types of surgical devices. Unlike what most people believe there is no FDA testing with these experimental meshes before they are placed on the market. But everybody believes that’s the case. That the FDA is looking over the manufacturers shoulder, that’s just is not how it works.

As we’ve seen so many times again and again it’s always about quick profits and big risks where it comes to so many medical devices and pharmaceuticals that have been placed on the market where patients actually become guinea pigs. In this particular story, guinea pigs are not doing well, at all.