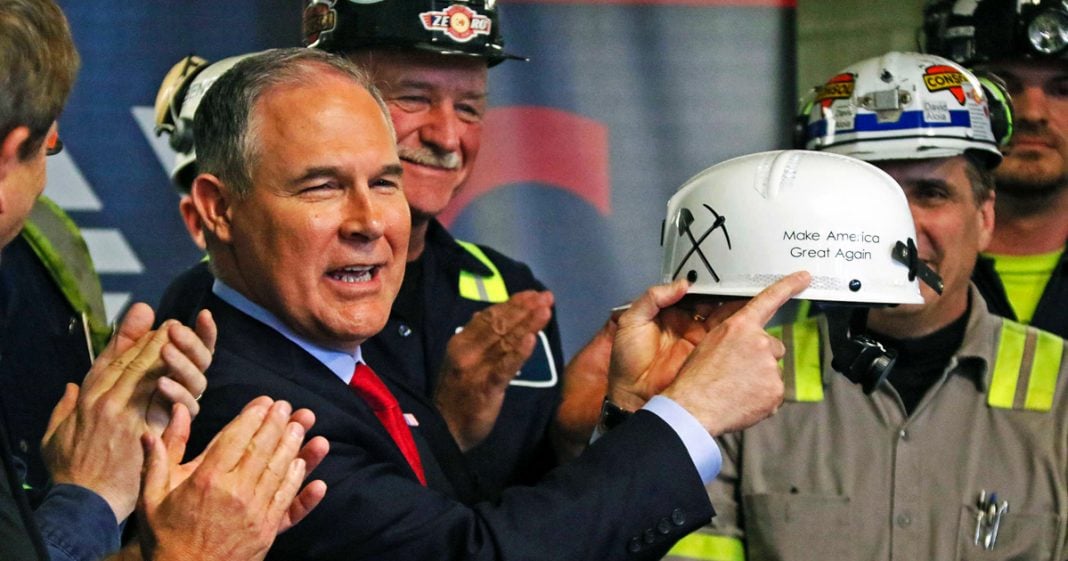 Republican politicians are creating a more persistent and a closer threat, a more “real” threat, to people’s livelihoods and to their way of life that, responding to climate change represents, versus climate change. Ring of Fire’s Farron Cousins & Sam Seder discuss this topic.

Sam: So Farron, when we broke, we were talking about your story in Truthout on how it is that despite the fact that there’s some polling that suggests that Republicans, by a slim margin, actually accept the reality of climate change, but how it is that they continually vote for Republican politicians who completely deny the existence of climate change, deny that it is a function of what humanity is doing. You suggest in your piece that it has to do with the Republican politicians creating a more persistent and a closer threat, a more real threat I guess is another way of saying it, to people’s livelihoods and to their way of life that, responding to climate change represents, versus climate change, which is maybe far off and doesn’t necessarily impact you and whatnot. And I was suggesting at the end that part of it is also that it’s become a cultural signifier, that if you’re really gonna be a member of Team Red, you’ve got to basically, more or less, deny climate change almost in public. Maybe secretly you can think there could be something to it, but in terms of being a real conservative, you just have to because that’s what you’ve been told on some level.

Farron: Well, they’ve built it into their identity, and that’s something that has taken place, really, since the Bush v. Gore election, because they painted Al Gore as this elitist, this Ivy League, liberal snob. They did the same thing to John Kerry, and they do the same thing to climate scientists. They do the same thing to those Hollywood elitist liberals telling you about climate change. What do they know? That’s the argument they use. These guys are elitist, they’re know-it-alls, they’re stuck-up snobs. You’re not like that. You’re an average, work-a-day American, and you don’t need to worry about what these rich people and these scientists who think they’re better than you; you don’t need to worry about what they’re saying. And that has become a part of the Republic brand, this assault on intelligence, basically. We don’t want anybody who claims to be a scientist telling us what to do. And they’ve really been building that 17 years at least, and that is who they are. If you have these scientists, and obviously we do have a lot of big-name celebrities out there working on the climate issue, it presents it almost, or the Republicans at least say it does, as an elitist issue. These people are wealthy enough to be concerned about climate change rather than feeding their family in the next few weeks. Republicans hijacked the climate change message spectacularly, and they turned it into an economic one for many of these voters.

Democrats could do the same thing. They could be out there every day switching it from the oncoming catastrophe to ‘If we enact these climate protections, you’re gonna have fewer sick days, you’re not gonna have as many expensive doctor’s visits or ER visits, corporations are gonna make more money due to the fact that people are calling in sick less, we’re gonna save this much money per year from air pollution deaths that will be prevented.’ There’s all kinds of economic arguments to make in favor of environmental regulations. The problem is we don’t have enough people out there talking about those benefits.

Sam: I know. I think broadly speaking, too, the problem has been that we’ve had a democratic party since Bill Clinton, and that has espoused this notion … now, it is changed. Let’s be clear. Barack Obama was significantly better on this accord, but not as far, frankly, forward as he should have been, which is that you have already, even with Bill Clinton, when he was talking about ‘We’re gonna have a mean, lean type of government. The era of big government is over.’ Well, you’re feeding into this narrative that when government gets involved in something, it creates problems. It is an obstacle to people’s wealth, that it’s an obstacle to people’s health and benefit, and that government cannot be a force for good. And so there’s even broader, I think, narrative repair that needs to happen.