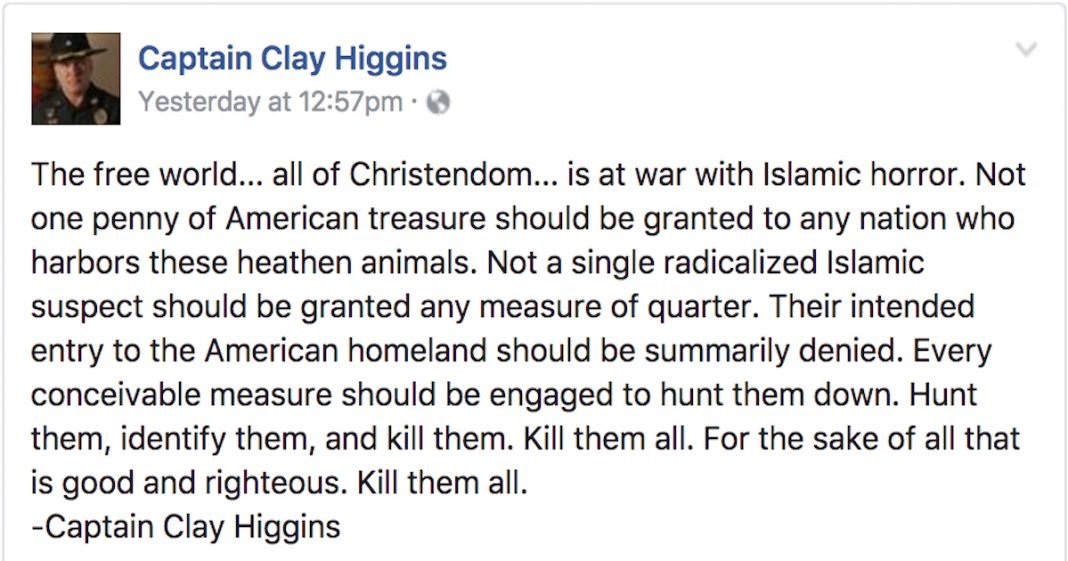 In the wake of Saturday’s terrorist attacks in London, a GOP lawmaker took to social media to deliver a stern message. Louisiana’s Representative Clay Higgins decided that justice and the Constitution have no place in dealing with Muslims that are even suspected of being radicalized. Rep. Higgins suggests that we simply:

There are several things to unpack in his post. Right off the bat, he asserts that “The free world… all of Christendom… is at war with Islamic horror.” In some regard, he is correct that terrorism affects the entire free world, but when he adds his qualifier “all of Christendom” his statement goes off the rails. Atheists, Muslims, Christians, Hindus, and humanity in general are negatively impacted by terrorism.

The former police officer then goes on to suggest that merely suspecting someone of believing the radical ideals that drive extremists is an offense punishable by death. While it is a noble goal to completely eliminate terrorist behavior, we must not forget the chilling reality Rep. Higgins is proposing.

Under this style of justice, radical thinking of any sort could be punished by the government. Religious beliefs that do not conform to the ideals shared by someone like Rep. Higgins could be seen as radical. What is to stop the government from saying Atheism is a radical belief. Should those people not be afforded “any measure of quarter?”

While statements like these have become commonplace from the Islamophobes on the right, coming from a member of Congress it is particularly appalling. This is something that Higgins is likely aware of, thus why the post appears on his campaign-related Facebook page, not his official Congressional one. Speaking to Ken Stickney, of The (Lafayette, La.) Daily Advertiser, Higgins’ congressional spokesman, Andrew David, said Higgins maintains the two sites to sidestep possible ethics regulations.

Still, Rep. Higgins is no stranger to making ridiculous statements to the public. Before being elected to the House of Representatives, Higgins served as St. Landry Parish Sheriff Office’s public information officer. In that role, then-Captain Higgins was known nationwide for his fiery CrimeStoppers videos, where he would call out criminal suspects and deliver messages to suspected gang members like:

“If you raise your weapon to a man like me, we’ll return fire with superior fire. I’ll meet you on solid ground anytime, anywhere, light or heavy, makes no difference to me. You won’t walk away.”

Higgins’ videos were a viral sensation, even drawing the attention of the national media (story continues after video):

He enjoyed his fame until he resigned in early 2016, after the ALCU took exception to one of Higgins’ scripts. The ALCU condemned Higgins for his encouragement of vigilante justice. Higgins’ boss, Sheriff Bobby J. Guidroz, then asked him to tone down the rhetoric in his videos, but Higgins resigned instead.

In addition to his demeaning manner of speaking in his videos, Sheriff Guidroz accused Higgins of other unprofessional acts during his time working for the Sheriff’s Office. Guidroz’ press release stated:

“I repeatedly told him to stop saying divisive, disrespectful, or demeaning things like, ‘You have no brain cells,’ ‘Knuckleheads’, or ‘Liars.’

[…]Clay Higgins appeared on the cover of a local magazine in full dress uniform, a direct violation of department policy, without my approval or authorization.

Furthermore, Higgins formed a Limited Liability Corporation (LLC) to raise money by selling mugs, t-shirts and other trinkets using the department badge and uniform.  Additionally, Higgins utilized the department’s physical address in registering his LLC with the Louisiana Secretary of State’s Office.  All of which are against department policy.

[…]If Higgins cannot operate within the parameters of this office and abide by our policies and procedures, then he is correct in resigning his position.”

In announcing his resignation, Higgins’ showed his true colors:

“I will not kneel to a discredited, wanna-be, black activist that doesn’t really have the best interest of his people in mind, who just wants to make a profit.”

Tough talk, racism, and Islamophobia all make Representative Clay Higgins a champion among Republicans, even if it means desecrating the Constitution. Of course, Higgins hilariously describes himself as a “known champion of constitutional rights.” That is an odd way to describe a man that advocates dispensing with constitutional protections.