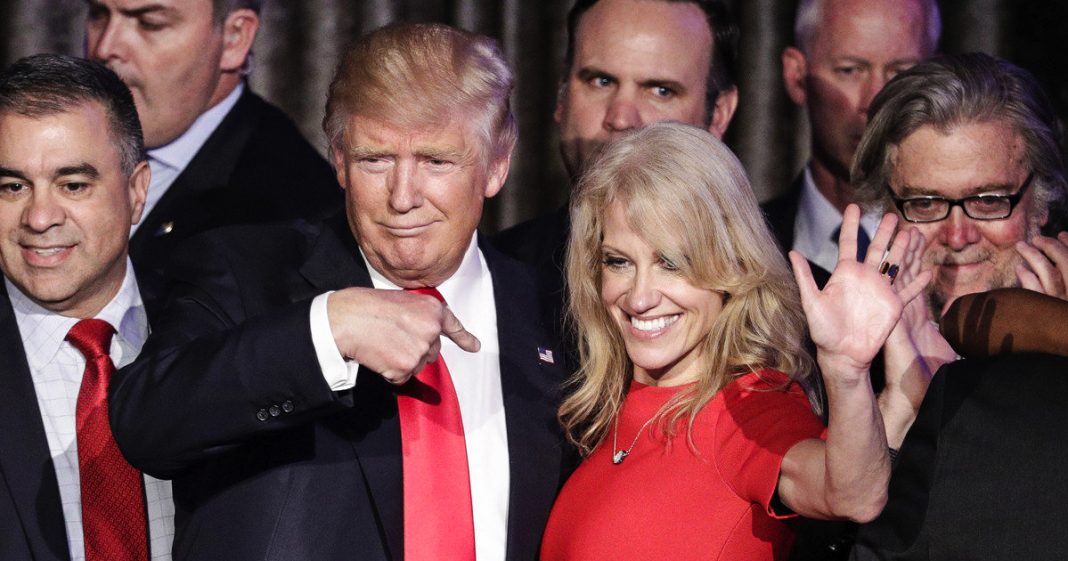 Kellyanne Conway appeared on NBC’s Today on Monday morning where she had to defend Donald Trump’s tweets by actually saying that the media is “obsessed” with covering the things he says on social media. Ring of Fire’s Farron Cousins discusses this.

Monday morning, Kellyanne Conway, counsel to the President, went on NBC’s Today Show and had to talk about the fact that Donald Trump just can’t seem to stop doing crazy things on Twitter. But she’s not mad at the President for this. Absolutely not. She is in fact mad at the media. Take a look:

Farron Cousins:               What Craig Melvin said there is absolutely true. Twitter is the President’s preferred means of communication to the American public, and even though analysis has showed us that about half of his Twitter followers are fake, he still uses that as his platform to convey his ideas, his messages, and his plans for the United States. So for Kellyanne Conway to just flat out say, “That’s not true.”? Well, that’s not true. That just seems to be Kellyanne Conway’s go to line anytime someone calls her or the President out for their lies. “That’s not true!”

Well, Kellyanne, it is. When you haven’t given an interview in three weeks and you’re constantly talking to the American public via Twitter, we have to look at those tweets because they are coming from the President of the United States. Furthermore, imagine what you guys would do, Republicans, if it was Barack Obama tweeting out all of these crazy things. Fox News would be covered wall to wall in coverage of any tweet with a typo in it, any tweet that said something like, I don’t know, “covfefe.” Yeah, you guys wouldn’t let up on that.

But when it comes to his policy, his attacks on other people, on other countries, we have to pay attention to those because those do shape foreign policy. You may not want to think about it and you may not like it Kellyanne, but those tweets have real world consequences. Right now, the rest of the world is laughing at us because of how the President responded to the Manchester attack, and the other people that aren’t laughing at us are disgusted by us. That’s what’s happening.

Donald Trump’s tweets are not just innocuous little things that he sends out and people laugh at or talk about on the media. They do have consequences, and those consequences stretch far beyond his own Twitter account. Those are consequences for all of us. When he insults another world leader on Twitter, that puts our national security at risk. When he talks about how horrible any particular followers of a certain religion are, that hurts all of us and puts us all at risk. His Twitter account, basically, is a national security threat.

But don’t tell that to Kellyanne Conway, because all she’s going to tell you is, “That’s not true!” Even though the rest of us understand that Donald Trump is showing us a window into his dirty, disgusting, black soul, Kellyanne is going to continue to go out there and defend it and attack the media as the people who should be ashamed of themselves rather than the President who should be ashamed of some of the horrible things that he is saying on social media.