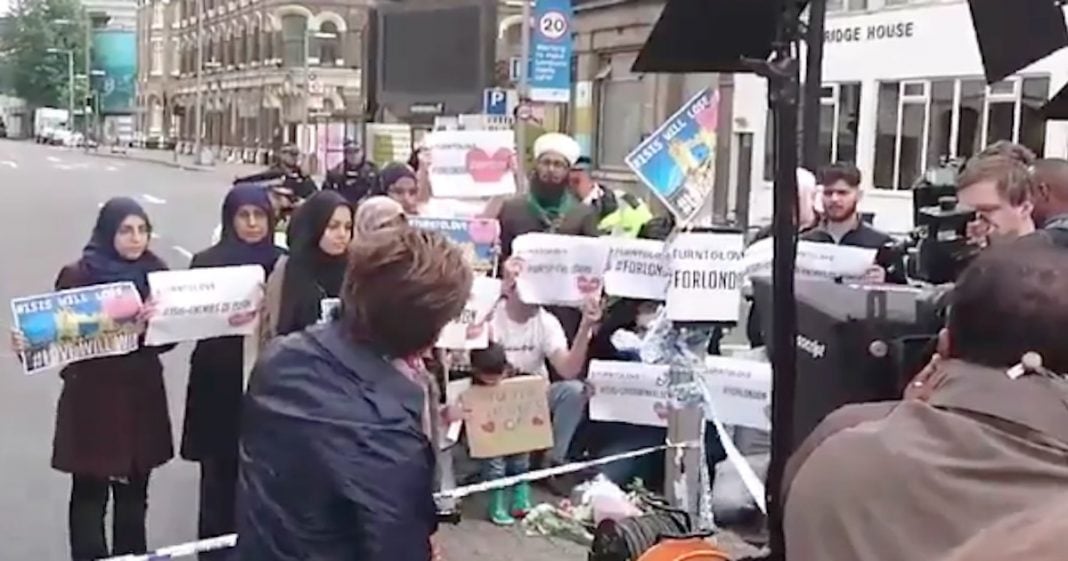 I’m sure we can all agree that we all hate ISIS. Terrorism, especially the type that bastardizes a religion and gives ammo to the Neanderthals on the right to spout hatred, is unacceptable on any level. So, why would CNN, The Associated Press, and other outlets have to stage a photo-op of anti-ISIS protestors?

CNN’s Becky Anderson delivered an editorial piece that stated the obvious about terrorism. But it is hard to blame someone for delivering a heartfelt piece about the resilience of a community rocked by unthinkable acts lately. Anderson noted that there were people nearby gathering to condemn ISIS’ reign of terror.

The AP tweeted a picture of the crowd that gathered:

London’s Borough neighborhood offers safety and a place to sleep for hundreds amid the chaos of terror attack. https://t.co/Bz6egjzA9a

But, when you look behind the scenes – this group is not a spontaneous outpouring of support. Twitter user @markantro sent out a video that shows what appears to be CNN producers handing out signs, hand-picking “protesters,” and dressing the scene for the perfect shot.

WATCH. @CNN scripting a narrative. Right before your eyes. pic.twitter.com/rdRbQzbqgy

Of course, I get it – all corporate news networks do this. We are not freaking out like Alex Jones or Mike Cernovich that see this act as some form of treasonous ‘gotcha’ moment for the mainstream media. But it is indicative of a wider issue with corporate media.

The world you see through the lens of “news” is carefully crafted and meant to convey the story they want you to see, not the truth. The distrust in the media has made the everyday person ignorant to realism in society.

In this case, it only serves to simplify the complexities behind merging two vastly different cultures. Instead of a reasonable dialogue on the challenges we face as Western society comes directly in contact with religious fundamentalism stemming from the spread of Islam. Reasonable concern over human rights deficiencies in the Middle-East moving into Western culture is replaced with a binary argument over Islamophobia.

Simplifying issues like this only fuels the growing divide in our country. Right-wing hate-mongers like Michael Flynn that want to paint Islam as a radical ideology and not a religion. Protests that are staged by the media only serve to fuel that sort of hatred.

If CNN is willing to treat a demonstration against terrorism as nothing more than window-dressing, it makes you wonder what else they distort behind-the-scenes. When they report on war, are they showing you reality or a carefully thought out scene? Are they faking outrage and selling you a story? Of course, those are rhetorical questions. We know the media paints a picture to influence your world-view.