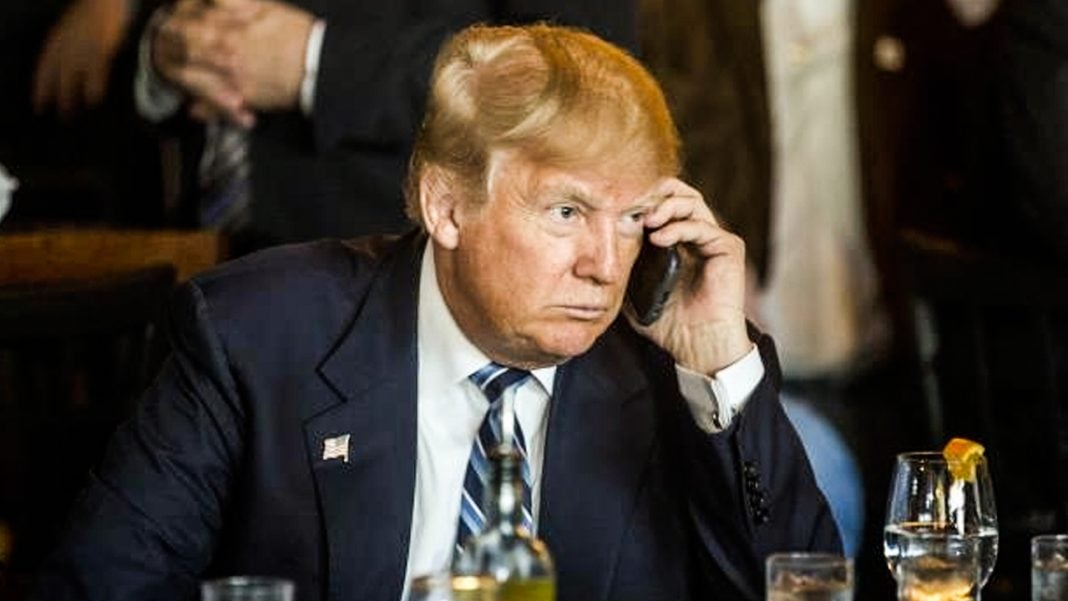 According to reports, Donald Trump has apparently been telling foreign officials to call him on his personal cell phone, raising huge security concerns among intelligence officials. Trump’s refusal to give up his personal phone creates very serious security risks, but apparently, the President doesn’t seem to care about that. Ring of Fire’s Farron Cousins discusses this.

Intelligence experts in Washington, DC are worried about the fact that Donald Trump doesn’t seem to want to give up his personal cell phone. Now while that may not seem like a big deal, believe me, it really is. After all, Republicans made a huge deal of the fact that while she was Secretary of State, Hillary Clinton continued to use her personal cell phone. Remember the whole email thing? That actually stemmed from using a personal cell phone with a personal Gmail account. Yet they see no problem whatsoever, the voters at least, with Donald Trump doing the same thing.

But the people running our intelligence, the same people who are terrified of having to give intelligence briefings to Donald Trump because they’re scared he’s going to blurt out information to people who can’t know it, are concerned about the fact that he is telling the Canadian Prime Minister, the President of Mexico, President of France to call him on his personal cell phone. Why would Donald Trump even want to do this, unless he doesn’t want other people listening in to those phone calls? The reason intelligence experts are very worried about this is because of the easy accessibility that hackers have to our cell phones.

We don’t like to think about it, but those things that we carry around in our pockets or our purses all day long, those things are very insecure. They’re very vulnerable to interception from a hacker or somebody with the right equipment. They’re not secure. Our conversations can be listened into by others, namely the NSA, but for the most part, anything we do on a personal cell phone that’s not run through a private server or secured server, is up for grabs to somebody with the knowledge and the tools to take that information. That’s what’s so concerning to our intelligence experts in Washington, DC. They know that if Donald Trump gets on his personal cell phone, starts talking about classified information, that information could be intercepted by our enemies. It could be intercepted by just a nefarious source, who goes out and wants to sell that information.

Donald Trump is breaking all the rules, all the protocols, all the norms, all the standards. I mean, this is a man that still hasn’t even released his tax returns, which has been basically the status quo in the United States for at least 60 years for presidential candidates. And the Republicans really don’t seem to care. Donald Trump sure as hell doesn’t care. Where is the outrage from Republicans? What Hillary Clinton did with her personal cell phone and the email account was foolish, but we know, based on investigation after investigation after investigation, there weren’t any real serious security breaches during that time. There were no massive leaks of intelligence information that put America in harm’s way. We can’t say that for Donald Trump because we don’t know what’s going on.

Republican voters are silent. Dead silent about this. They don’t care. They don’t care about Donald Trump blurting out classified information during meetings, which has happened. They don’t care that the people in charge of our national security, these intelligence experts, intelligence agencies, are terrified to even talk to this man, because he can’t be trusted. If you ask me, that’s a pretty big security risk for the United States. I guess for Donald Trump, if you want to still have access to your Twitter feed, you’re going to have to keep that personal cell phone, even if it puts the entire country at a massive security risk. As long as you can send out those Tweets, I guess that’s really all that matters.