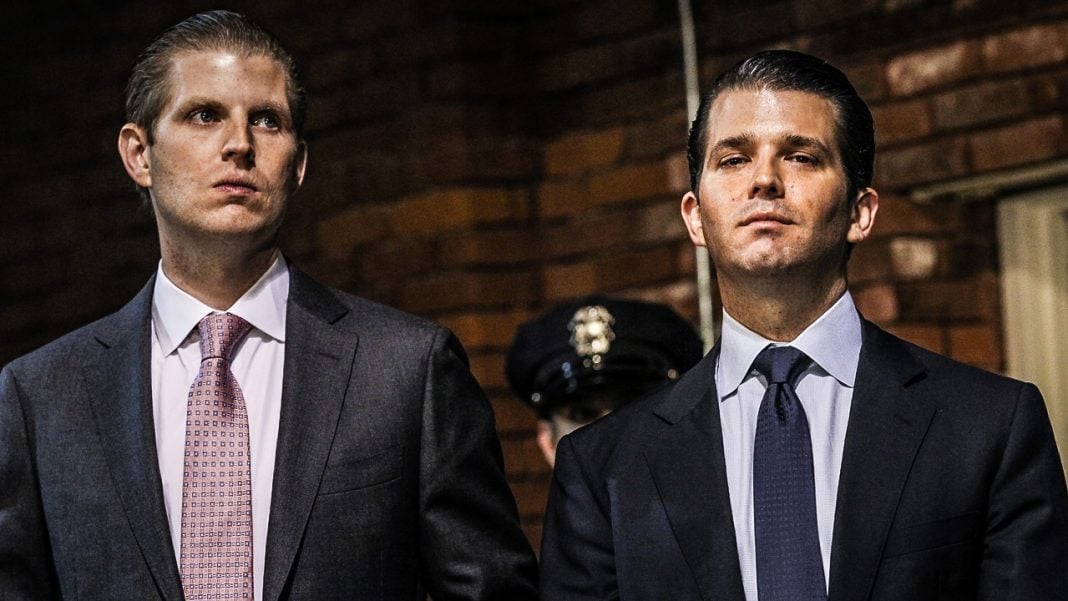 A new report says that Donald Trump’s sons – Donald Jr. and Eric – are meeting and discussing policy with people within the RNC, all while running Trump’s businesses. The fact that they are allowed to do this creates a huge conflict of interest for both Donald Jr. and Eric, as well as for the President himself.  Clearly this family has no ethics to speak of. Ring of Fire’s Farron Cousins discusses this.

You know a lots been said since Donald Trump took office about the many conflicts of interest that this man has had while serving as president, but little has been mentioned until recently about the role that Donald Trump’s sons are playing. Not only within the administration, but in Donald Trump’s businesses and according to a new report over at Think Progress, there really is no difference between the two at this point. Donald Trump’s administration and his businesses are one and the same. Here’s what they’re telling us; Donald Trump’s sons, Donald Jr. and Eric Trump, are out there fundraising for Republican candidates. They’re meeting with higher ups within the Republican national committee. They’re meeting with politicians and discussing policy. They’re laying the groundwork for what happens in this country and at the same time they’re running the businesses that the president of the United States owns.

Think about that … Let me put it a different way actually. Suppose the Coke brothers manage to win the presidency and then a Coke child goes and meets with all the lawmakers in this country and says this is what we want you to do. This is what your president wants you to do. Pretty sure this is what you’re gonna do … by the way here’s a ton of money we’re gonna go fundraise for you. We’re gonna get American’s For Prosperity out there for you. Your move, right? People would be calling for impeachment immediately. People would be saying that this is a massive, unethical conflict of interest, but for some reason Donald Jr. and Eric are getting a free pass by the media. While at the same time trying to manipulate members of Congress to pass legislation that is directly going to benefit Donald Trump himself and Donald Jr. and Eric and Ivanka and then rest of the whole little Trump clan.

Nobody’s talking about this. This is a story that really should be a lot more massive than it actually is. We have the Trump sons out there negotiating with politicians on policies that will directly affect or benefit their businesses. Which directly affect or benefit the president. They’re fundraising for these people as both members of the Trump administration, members of the Trump family and as business people. You can’t get more conflicts of interest rolled into two individuals than what these two men currently have. Here’s what has to happen if Donald Trump remains president and doesn’t somehow get impeached. The Trump sons have to have no contact with their father. They have to disengage themselves from American politics of all kinds. That is the price you have to pay for your father to be president. You go back to New York or wherever it is your based out of, you run the businesses, you do that fine but you leave politics alone.

Otherwise, you’re corrupting the entire system and that’s not to say that it’s not already corrupted. I mean hell, Donald Jr. and Eric aren’t really doing anything different than what the Coke brothers do, or people like Sheldon Adelson. The problem is that their father is the president and that makes it even more disgusting, because it’s one thing for a Coke brother to pull a congressman aside and say, “This is what you’re gonna do,” but it’s another when you have the ongoing threat of intimidation from the president lingering over somebody’s head and that’s what Donald Jr. and Eric have against these Republican congress people that they’re fundraising for and meeting with. They know that they can intimidate them. They know that a disapproval from Trump or a couple of mean tweets from Trump about that person, could effectively end their career as a Republican politician. Not that it really gains anything for him, but Donald Trump could easily destroy them and that’s what Donald Jr. and Eric understand.

That’s why they’re not gonna give up their interest in the business or their interest in politics. They’re trying to merge the two. They’re trying to let the president make as much money as possible off of his office because they know eventually that money’s coming all to them in the form of an inheritance. That’s what they’re doing right now. They’re ensuring that once their father passes on, that they get all of this money that this man made during his presidency. That’s all this is about. That’s all that family cares about. They don’t care about the damage they’re doing to this democracy. They don’t care about the damage they’re doing to Congress. They don’t care about the reputation of our political institutions that they’re destroying. They only care about how much money they can make before their father eventually gets kicked out of office.