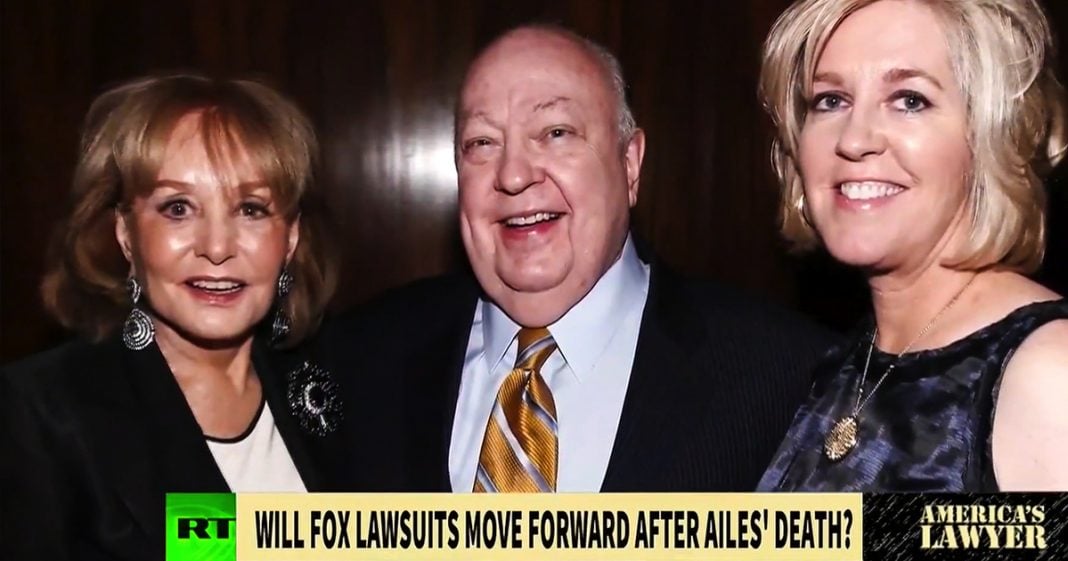 Via America’s Lawyer: Mike Papantonio is joined by Mollye Barrows, Legal Journalist for The Trial Lawyer Magazine, to discuss how the death of former Fox News CEO, Roger Ailes will impact the pending sexual harassment lawsuits against Fox News.

Papantonio: The death of former Fox News Roger Ailes has led to a variety of reactions from across the media spectrum. Many conservatives predictably praised his contributions to cable news while liberal commentators called him out for his treatment of women and exploitation of anti-Muslim bigotry for big profits.

The most important question that should be now asked is, what’s going to happen to the two pending sexual harassment lawsuits filed against Ailes now that he’s passed away? Joining me now to answer that question is Mollye Barrows, legal journalist with the Trial Lawyer Magazine. First of all, Mollye, briefly outline the two lawsuits that are pending and tell us what Fox News is facing.

Mollye: Yes. They still have quite the legal troubles. The death of Roger Ailes certainly isn’t going to impact that. The two lawsuits that remain, former Fox News anchor Andrea Tantaros as well as a former on-air contributor, and I think she may still be a contributor, Julie Roginsky.

Tantaros, her claim is that Ailes repeatedly made sexual comments to her, and that eventually she was demoted when she refused to turn around for him. Her case is now … A court ruled that she should take it to arbitration. She is appealing that right now. Also, Fox News, has filed that her claims that her phone calls and emails were monitored and that some of that information was used against her to smear her in public, they’re asking for that to be dismissed. That’s where that case stands.

In the case of Roginsky, her claims were similar. She says that he repeatedly made sexual comments to her, but that her appearances as a contributor on Fox News diminished significantly after she refused to have a drink with him.

Papantonio: Yeah, you see a pattern, don’t you?

Papantonio: It’s just like the Cosby case. The pattern always flows from top to bottom. In an organization like this, it would be impossible for the people at the top not to say, ‘Something’s going on here with Bill O’Reilly. Something’s going on with Roger Ailes. We need to pay attention to it.’ Instead, they put their head in the sand, and the pattern always works out the same. They put their head in the sand at the top. The people are victimized at the bottom. In this situation, the victimization went beyond just the sexual harassment. They went to where they were actually spying on their own employees.

Mollye: In a criminal investigation, normally it would stop in its tracks, but in civil litigation that’s not the case. The estate of the deceased person would accept responsibility in lieu of the person being alive. That’s most likely what we’re going to see with these cases that specifically name Ailes.

In other cases where the culture, as you said, this misogynistic culture or this top-down harassment culture which is the pattern that’s being established in some of these other suits that specifically name those organizations, then that’s definitely going to be one of those cases where they’re going to take the liability. Ailes is mentioned in there. Again, similar type patterns of behavior. It’s interesting to note, on the other comment that you made about culture, we’ve had three additional suits filed against Fox since Roger Ailes’s death. Those include everything from racial discrimination to gender-based discrimination. There’s even a reporter for a New York Fox affiliate who says that she’s been denied opportunities at her home station as well as opportunities to move to the network because she refused sexual advances from Ailes.

Mollye: It would be more of a unique application, actually, because apparently it’s a 19th century law that’s aimed more at keeping perjurers out of probate court and from saying something that may potentially not be true about communications they had with somebody who had died over a will. In this case, either the plaintiffs or the defense could potentially use it. They could say something along the lines of, the defense could say, ‘Hey, whatever so and so has to say is inadmissible because he’s not here to defend himself,’ and then the plaintiffs could say, ‘Ah, but he may have had this conversation with so and so, and he mentioned it in this email. He said, she said.’

Papantonio: At the end of the day, it’s all coming in.