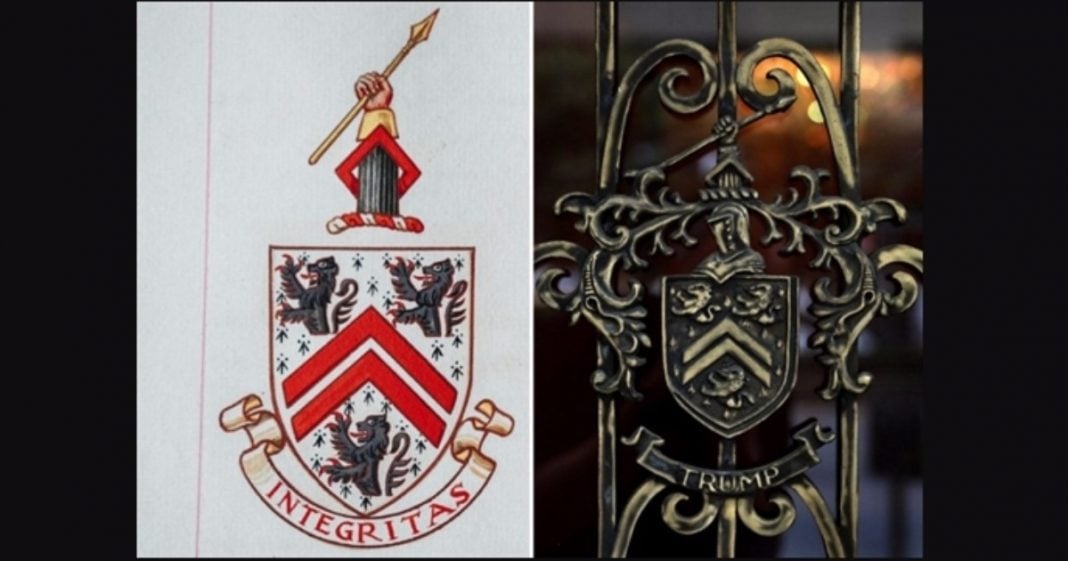 Traditionally, a coat of arms is an honor bestowed upon a person for exemplary service to others, or for another notable achievement. This was the case for early 20th Century lawyer and diplomat Joseph E. Davies (1875-1958), who had a long and distinguished career in civil law, politics, and diplomacy. Davies was honored by many governments in Europe and Latin America for his work.

So why is a hack like Donald Trump, a spoiled, impudent man-child who never earned a damned thing in his life, has never served anyone or anything but his own bloated ego and selfish interests, and owes his “accomplishments” to exploiting and cheating others, using Davies’ coat of arms for his company trademark? And how is he getting away with it?

Starting out as a delegate to the Wisconsin Democratic Convention in 1902, Davies went on to serve in various capacities under Democratic Presidents Woodrow Wilson, Franklin Roosevelt, and Harry Truman. From 1936 to 1938, he served as the Second US ambassador to the Soviet Union, and then to Belgium until the outbreak of World War 2. During the war, he was sent on a risky mission to the USSR on behalf of President Roosevelt. Over the years, he received honors not only from his own government, but also from those of France, Belgium, Luxembourg, Greece, Yugoslavia, the USSR, three Latin American countries, and the UK.

The government of the latter bestowed upon Davies a coat of arms – an honor not given lightly. In heraldic terms, that coat of arms would be described as “ermine argent a chevron gules between three lions sable salient” over which appears an “armed arm holding lance” and under which is the motto, “Integritas,” Latin for “integrity.”

Unsurprisingly, when Trump appropriated Davies’ coat of arms (also informally known as a “device”), he replaced the motto with his own name – appropriate, since the name “Trump” has come to be a direct antonym for “integrity,” of which he has none. He first ran into problems when he attempted to brand his Aberdeen golf course with his stolen device when heraldic officials in Scotland noted that he had failed to register it with the U.K. College of Arms as legally required. When Trump attempted to do so however, the college noticed that it was identical to the one that had been granted to Davies in 1939 – and rejected his application.

Luckily for Donnie-boy, that was all that happened. In the UK, it is a violation of the law to assume a coat of arms belonging to another. However, the last time the High Court of Chivalry was in session was over sixty years ago, and apparently, Trump’s theft wasn’t considered important enough to prosecute.

Nonetheless, the Donald decided to change some colors and replace the motto with his own name. That didn’t fly with the College of Arms, either. A representative of the college, speaking with the BBC, pointed out that in order for it to be considered a new coat of arms, “There needs to be at least two lineal differences from something that’s been granted in the past.”

In Scotland, Trump might have indeed faced a major lawsuit under the stringent laws of Scotland  – but Davies’ grandson, retired Senator Joseph Tydings (D-MD) realized that Trump would have kept it tied up in Scottish courts for years and litigation would only drain the family’s resources. Nonetheless, a legal challenge from Scotland’s counterpart to England’s College of Arms, the Court of the Lord Lyon, convinced Trump to come up with a new design in 2012 – at least for use in Scotland.

In the US however, there are virtually no laws governing heraldry. The closest equivalent would be laws regarding registering a trademark or logo – something that neither Davies nor his descendants ever thought to do with their coat of arms. That made it fair game for Trump, who simply stole the design and registered it as is own company logo with the US Patent and Trademark office.

Whatever gave Trump the idea to steal the Davies’ family coat of arms in the first place? It turns out that Davies’ third wife, Marjorie Merriwether Post (of Post Cereals fame), was the original owner of the Mar-a-Lago estate, which she had built during the 1920s. Upon her death in 1973, she bequeathed the property to the US government for use as a winter retreat for US Presidents. However, the financial costs of maintenance and upkeep was more than either the federal government or the Post family wanted to deal with. Trump finally bought the place in 1985 in the face of stiff opposition from the old Palm Beach aristocracy.

We can at least take comfort in the knowledge that, despite his billions, Trump can never buy respect. Try as he might to surround himself with the trappings of power and importance, he will never be more than a two-bit grifter who just happened to get very lucky and was cunning enough to play on people’s fears and stupidity.