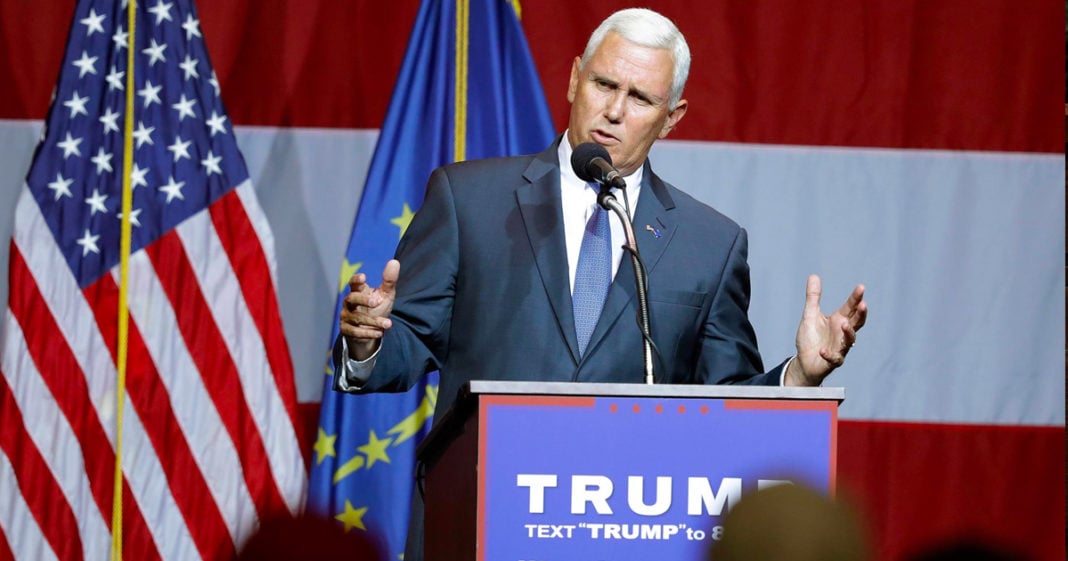 When it was announced that boy scout Mike Pence would be standing by Donald Trump’s side at the White House, none could have guessed that his primary role would be repeatedly feigning ignorance at each of Trump’s decisions and missteps.

Mike Flynn spoke with the Russians? It’s news to Pence!

Trump gave away top secret intel to the Russians? Pence is just hearing about this!

Jared Kushner tried to establish a back channel to the Russians? Pence don’t know nothin’!

But the latest ‘aw shuck’-ing that Pence is attempting to pull off is associated with President Trump’s decision to withdraw the United States from the Paris Climate Agreement.

Speaking with Fox News on Thursday, Pence stood by his President by appearing downright mystified that the left and the world at large could care so much about a little issue like climate change.

.@VP: “For some reason, this issue of climate change has emerged as a paramount issue for the left – in this country and around the world.” pic.twitter.com/1UgRsgVkj1

“For some reason or another, this issue of climate change has emerged as a paramount issue for the left – in this country and around the world.”

“For some reason,” Pence proclaimed, as if those in the scientific community and Democratic party hadn’t spent the last several years making it absolutely clear why issues surrounding climate change are a vital issue needing all of our attention.

As if we didn’t know that human activity has seriously and irrevocably changed the very landscape of our planet, warming the atmosphere and aggravating rising sea levels beyond a sustainable level. Maybe the “reason” is the fact that parts of our coast will soon be under water – many coastal cities are already seeing far more flooding thanks to this phenomenon. Maybe the “reason” is increased catastrophic storms, both here and abroad; the hurricanes, tornadoes, droughts, and floods.

Instead, Pence, Trump and the rest of the Republican ilk want to pretend that the desperate pleading from the scientific community is nothing more than a ploy – a ploy for what? Unsurprisingly, Pence doesn’t know that one either.

The left didn’t decide to champion free ice cream sundaes to all; it’s no mystery why we support action to fight climate change – because it will eventually kill us!

Pence continued his oblivious diatribe by attacking President Obama’s role in the deal, saying that commitments to reduce Co2 emissions was a “bad deal” for the American economy. How, you may ask? Pence doesn’t have answers for pesky questions like that, he just knows that trying to do anything to save the planet is a bad, bad idea.

Pence capped off his train of ignorance by praising the President for his enormously stupid statement that he was “elected to represent Pittsburgh, not Paris.” Pence said that he was so glad to have a President that stands unwaveringly for American interests – like the apparent American interest of continuing to burn fossil fuels until they run out and the earth is far too uninhabitable for human life.