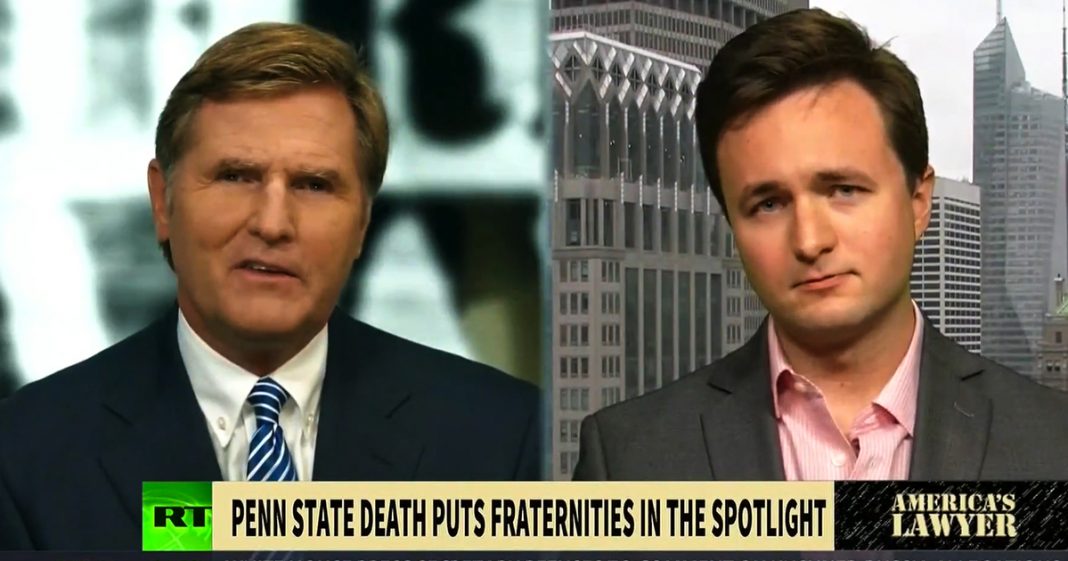 Via America’s Lawyer: Mike Papantonio talks to Andrew Lohse, author of ‘Confessions of an Ivy League Frat Boy’ about a horrific death at a Penn State fraternity that has led to charges against 18 students.

Papantonio: Earlier this month horrific details emerged in the death of a 19 year old Penn State sophomore, Timothy Piazza. Piazza was a member of the fraternity Beta Feta Pi and died during a party involving a drinking initiation ritual for fraternity pledges. 18 students at Penn State are now facing charges in connection with Piazza’s death, and the fraternity has been permanently banned from the university.

According the indictment, just before midnight, a fraternity member wrote in a group text message that Piazza, “might actually be a problem.” It says, “He fell 15 feet down a flight of stairs, hair-first, going to need help.” Fraternity members then treated Piazza like a road kill and put a backpack full of books on his back to weigh him down and make sure he didn’t choke on his own vomit. That wasn’t until 10:48 a.m. the next morning that anyone at the fraternity called an ambulance. Joining me now to discuss this case is Andrew Lohse, former fraternity member at Dartmouth University and author of “Confessions of an Ivy League Frat Boy.”

Andrew, how does this case compare to some of the fraternity behavior that you studied as you looked at this, as you created this book. I know you’ve done a lot of research on this. How does this compare?

Andrew: You know, I think this case kind of falls in the middle of what can happen on any given night of the week at any kind of school in America. Whether a small state school or a big Ivy League college. The drinking and the group think, the secrecy and the peer pressure, power dynamics that are part and parcel of fraternities, are a constant problem. It think that we can see that across the board.

Papantonio: In recent years, prosecutors have become more aggressive in going after fraternities. I think in 2015 there were 22 frat members at, I think it was Northern Illinois University, were convicted of misdemeanor charges in the death of a freshman student. In this Piazza case, some of the members are actually facing aggravated assault charges. Do you think these charges are having any kind of impact on the way that fraternities operate going forward?

Andrew: Well it’s a little bit too soon to kind of assess and try to measure whether this new prosecutorial point of view on fraternities is going to have an impact. But I will say is that we are long past due for some kind of real accountability and responsibility taking for fraternities. Not just as organizations, and they are large national corporations, but as the individuals who make them up, who make the decisions that cause harm, they cause death, and they are in a lot of cases a menace to their community.

I think that by holding people themselves responsible, hopefully that will be a way to dissuade people from even joining in the first place, and then hopefully to prevent them from creating reckless illegal environments once they are there.

Papantonio: Well at the end of the day you certainly can get judgments against individuals that were responsible. Most people don’t realize that fraternities and sororities are a huge business. They are actually represented in Washington by a political action committee, I think the name is Frat PAC.

Papantonio: First of all, if you are getting individual judgments against some of these people that are responsible, that’s one thing, but I think the only way to stop it, and I want to know your take on this, the only way to stop it is to start taking money against the national organizations, taking money away from them and closing down their business. At the end of the day, it’s a business. These cats out there that feel like this is some fun thing they are doing, hazing, they are part of that business.

In a lot of ways, that’s kind of the draw to the fraternity, the talk of come to this house and we are going to have some fun. But it is business, isn’t it?

Andrew: Right, I think that’s what the kind of rank and file fraternity members don’t realize. They think that they are paying dues and that maybe the dues are funding the alcohol at their parties, or funding some kind of trip or something like that, upkeep of a house. But a large portion of that money is then being funneled upstream to these large national organizations that are a multi million dollar industry. That is now seeking protection with Frat PAC, a lobbying group in Washington D.C. I personally find that shameful. These are organizations that every time something reckless or negligent happens, where there is a death, where there is a sexual assault, it’s clearly a part of the fraternity culture, they want to wash their hands of it and say that ‘Well, these are local chapters and we can’t control them. We just set standards and they either follow them or they don’t.’

Papantonio: They’ve got their lobbyists in Washington and obviously they are doing everything they can to lobby against any kind of change on hazing laws, because that’s part of the draw, isn’t it? In other words, if you talk about the fraternity culture, that’s part of the culture that brings the money in because it brings the members in. But it’s an interesting thing, I think you’ve called for fraternities to be abolished completely. Wouldn’t that though then give rise to kind of what we see, non sanctioned fraternities which would be even more difficult to control. Sometimes they operate off campus. I don’t know how you control that if you do away with them totally. What is your take and reasoning on that?

Andrew: Well I think that these colleges and universities have shown time and time again that they can’t control these organizations whether they are sanctioned, recognized entities, or whether they are an off campus rogue entity that isn’t plugged into the administrative structure. I mean fraternities in general cause a unique harm that other extracurricular or college organizations don’t cause. They are incapable of causing that kind of harm. But they don’t bring a unique benefit that some folks say that they do. I mean the philanthropy that fraternities offer is not a unique offer. I’ve never heard of someone being left to die on a couch in a red cross building, but that happens in fraternities fairly often. I think that banning them is going to be the only way that we can try to guarantee and try as best we can to prevent these types of events from happening. I think that the recognition that universities offer fraternities is not just symbolic, and it’s not just on paper. I mean we are talking about insurance policies that they are allowed to get involved with, different financial incentives, student life housing. Incentives of being recognized. Then we also have to start looking at judgments against the universities.

Papantonio: That’s what I was going to talk about here. Once if they are on campus and first of all you go after the national headquarters for that fraternity. Then the next target really is the university itself. I’ve got about one minute, and I want to ask you, isn’t that where this ultimately lands? That the university itself becomes responsible for all of this. Got about a minute.

Andrew: I think that’s where it has to land. Because not only do the universities permit this type of behavior or this type of environment to happen, in fact, in some ways, they encourage it and they look the other eye. In my book “Confessions of an Ivy League Frat Boy,” I talk about how I brought evidence of shocking, disturbing and dangerous hazing to the administrators at Dartmouth College who not only looked the other way but tried the best they could to cover it up, smear me, and dismiss my truthful claims. I think that has to stop. I think people have to start realizing that we have to go after the universities who are making this happen in the first place. They are using fraternities to recruit their own students in the same way that fraternities themselves are trying to recruit pledges to raise money and then send that upstream to the national entities. I think there is a lot of legal work to be done on this issue.

Papantonio: Mm-hmm (affirmative). Thanks for joining me, good luck out there, okay?

Andrew: Thanks for having me.

Papantonio: It sounds like a big long term project. Thanks for joining me.